Trump Announces Operation Legend, Sending Federal Agents to Chicago and Other Cities Amid Rise in Violence

Trump Announces Operation Legend, Sending Federal Agents to Chicago and Other Cities Amid Rise in Violence

“The Justice Department will provide more than $61 million in grants to hire hundreds of new police officers where they are needed most.” 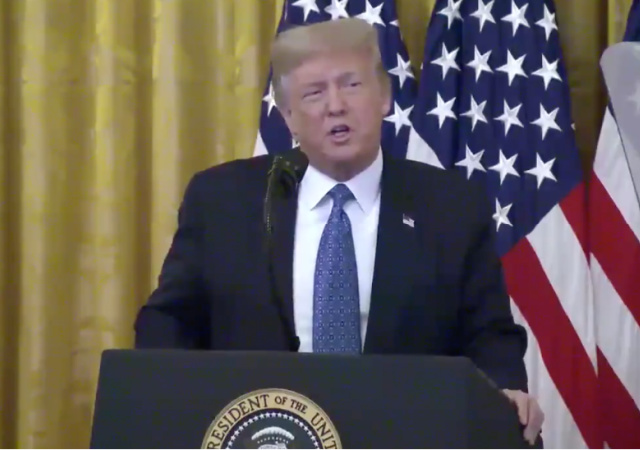 President Donald Trump announced Operation Legend, which involves sending federal agents to the Chicago and other cities that have seen a spike in violence since the death of George Floyd.

The “surge” of agents announced on Wednesday to Chicago and other American cities is part of Operation Legend – named after 4-year-old LeGend Taliferro, who was fatally shot while sleeping in a Kansas City apartment late last month – and comes as federal law enforcement officers have already descended on Portland, Ore. and Kansas City, Mo.

“The effort to shut down police in their own communities has led to a shocking explosion of shootings, killing, violence, murders,” Trump said during a speech in the White House’s East Room. “This rampage of violence shocks the conscience of our nation and we will not stand by and watch it happen.”

Chicago will get 100 federal agents. These agents usually come from the ATF and the DEA, but Operation Legend includes agents from the Department of Homeland Security Investigations (HSI).

.@TheJusticeDept will provide more than $61 million in grants to hire hundreds of new police officers where they are needed most. pic.twitter.com/uzKuG71bK5

After Floyd’s death, calls have come out to defund and disband police departments. Riots and looting broke out. Chicago has seen over 50% more homicides this year than last year at the same time.

Portland has spiraled out of control with the mayor and other officials insisting the commotion is made by a few displeased people.

More federal agents = good. However, I fail to see how grants to hire more local police who will be told to retreat and stand down by local politicians will do anything other than allow the police to write more tickets to white people and arrest white people trying to protect their homes from the mobs??

notamemberofanyorganizedpolicital in reply to garybritt. | July 22, 2020 at 5:52 pm

Did you see that mushroom cloud?

Did you hear that deafening thunder?

That was all the Democrats exploding.

Many nore upticks than I can give you. This whole thing stinks. The police are NOT our friends, and not to be trusted.

Depends on your circumstances. I once had a very threatening student in a college classroom. She actually threw the teacher’s desk. When the nice tall policeman came, summoned by a student who slipped out the back of the room, I could have kissed him. At 110 pounds, up against a black Bull D… acting crazy and obviously violet, he was definitely my friend.

Except for the “bad apples” which are few, cops are good and we need them and we must support them. We must fight the city, county, state legislatures who write unjust laws and regulations that they are required to enforce.

I grew up in Los Angeles, then attended college in San Diego. I developed a very, very healthy distrust of police. For the record, I have never been arrested.

I’[m talking about federalizing this situation, not about enforcement of the laws

I’d bet a lot Trump will use the grants to reward cities that maintain law and order and withhold them from the ones that foster mayhem.

“Chicago has seen over 50% more homicides this year than last year at the same time.”

That says something considering Chicago was already the nation’s leader in gun-related assaults and deaths.

The Feds won’t be touching those areas anyway.

This is exactly what Hitler did when he deployed federal law enforcement agents to address the Brown Shirts violence after he disbanded the local police forces. Worse than Hitler!

I’m confused. Are you equating Trump with Hitler?

If you don’t get joke, you should read up about Hitler’s brown shirts and the role they played in his rise to power. They were his Antifa/BLM/Occupy rabble-rousers and Hitler abolished the police to get them out of the way. Does that sound like Trump?

Or maybe it’s that I referred to the “Worse than Hitler!” meme?

notamemberofanyorganizedpolicital in reply to Pasadena Phil. | July 22, 2020 at 10:28 pm

Lots of new readers seeking out the true news now more.than ever.

A Katrina moment, where he’s judged by press if be does it, and cancelled through social justice if he waits for a consensus. The Democrats think they can abort the baby and have her, too. Time will tell how many Americans subscribe to their religious (i.e. moral) precepts.

“Democrats think they can eat the babies and abort them too.”

And yet Chicago’s mayor is loudly and clearly saying she doesn’t want any outsiders to help restore law and order in her city. Why?

Solzhenetsyn pointed out communists always set criminals against the ordinary population– keeps them on their back foot, and easier to handle

notamemberofanyorganizedpolicital in reply to hopeful. | July 23, 2020 at 2:25 am

Until the armed citizens give the criminals and politicians….. but I repeat myself….

IMO, this is necessary, because so far there have been no consequences. The arsonists and destroyers think they are invincible. A few real arrests and federal prosecutions will cool this down.

Do not spend my tax dollars in a self created shit hole.

Your tax dollars will be spent to start to unravel the anarchist network, the way the Mafia was unraveled starting in the Kennedy years.

notamemberofanyorganizedpolicital in reply to hopeful. | July 23, 2020 at 2:28 am

What I want to know is to what extent more police force will equate to more arrests, prosecutions, and prison sentences for career criminals.

Using federal taxes to pay for what Chicago doesn’t want to pay for? Hell no…let them bail themselves out. Why is Trump doing this? It’s stupid.

Not only that, he’s setting precedent for a Dem in power to federally crush opposition from conservatives when out of power.

Stupid stupid stupid. Let Chicago burn in its own embers of liberal stupidity.

Assuming that ‘hiring more police officers where they are needed most’ also means that municipalities can’t cut their police force while gaining federal dollars to hire additional police officers then ok. In other words don’t create perverse incentives.

Most needed isn’t more police, but rather the willingness within municipalities to arrest, jail, prosecute, convict and imprison criminals. If locals won’t change their mindset to do that then no number of police will solve the problem.

I wonder if this is really a version of “Operation Tripwire”.

Not a good idea. This is an escalation that plays into their hands.

The Portland and Chicago situations are different. Portland is the grip of armed radicals–Trump should federalize the Oregon National Guard to impose martial law. Chicago is just Chicago–let the trash kill one another

What is happening here is that the Democrat leaders of blue cities and states are allowing and even encouraging rioting and other widespread criminal behavior, which places the lives of their constituents at risk. They are doing this either through incompetence or for political gain. However, the President of the United States also has a duty to protect the lives of these citizens, who are also HIS constituents. He has offered all kinds of help to bring these situations under cintrol and has been rebuffed by the leaders of these cities and states. The terrible thing is that he has had to allow this situation ti continue until he now has sufficient public support to do what he should have done weeks ago, bring federal LE assets to bear to stop the violence and lawlessness. If local leaders will not alllow the local police to stop criminal activity and governors will not declare a state of emergency and send in the national guard to restore order, then there is no one left by the local residents and the federal authorities. And, in thee liberal enclaves, the local citizenry has been disarmed. So, who is left?