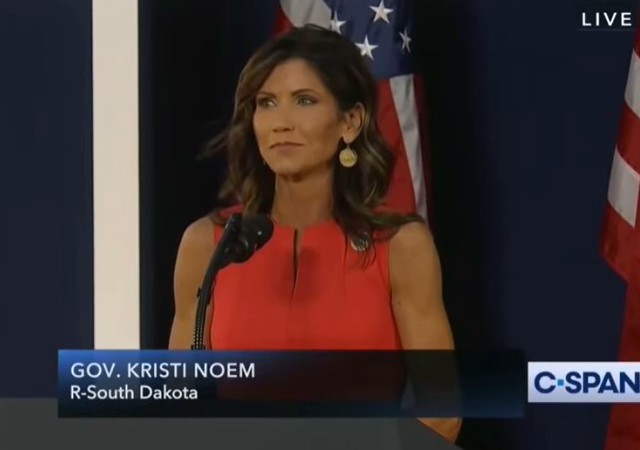 As Fuzzy reported Sunday, the mainstream media ran wild over the weekend with blatantly biased articles and tweets on the speech President Trump gave Friday night at Mount Rushmore on the eve of Independence Day.

Some particularly dishonest news sites like the Washington Post falsely claimed Trump’s speech was a “harsh denunciation of the racial justice movement,” and an attempt at “preserv[ing] Confederate symbols and the legacy of white domination.”

Unfortunately, supposedly reputable media outlets like the Washington Post weren’t the only ones dishing out falsehoods regarding what happened during Trump’s visit to South Dakota.

South Dakota Gov. Kristi Noem (R) also gave a speech that night and noted, among other things, that “we have been witnessing a very troubling situation unfold. In real-time, we are watching an organized, coordinated campaign to remove and eliminate all references to our nation’s founding, and many other points in our history.”

She further went on to point out that instead of “looking to the past to help improve our future, some are trying to wipe away the lessons of history. Lessons that we should be teaching to our children, and to our grandchildren. This approach focuses exclusively on our forefathers’ flaws. But it fails to capitalize on the opportunity to learn from their virtues.”

“Make no mistake,” Noem stated bluntly. “This is being done deliberately to discredit America’s founding principles by discrediting the individuals who formed them so that America can be remade into a different political image.”

Watch the speech Noem gave below:

The full text can be read here. At no point did Noem reference Confederate statues, the Civil War, or anything of the sort. But here’s how The Hill initially portrayed her remarks in their headline:

The actual quote by Gov. Noem

This is how it looked in their RSS feed:

Preserving this false headline from @thehill for the record. pic.twitter.com/CoqJe8tk3O

Naturally, because some people couldn’t be bothered to watch the actual speech nor to get their news beyond a tweet (and because the Hill conveniently didn’t provide a video clip), the Usual Suspects jumped on The Hill’s report as supposed proof that Noem made an impassioned speech defending the Confederacy or something:

They are so smug in their wrongness. pic.twitter.com/c4co8WtnDM

After criticism, The Hill changed the headline to read “South Dakota governor criticizes removal of statues as effort to ‘discredit’ nation’s principles” and issued the below correction at the bottom of the piece:

CORRECTION: An earlier version of this story drew too strong a link between the effort to take down Confederate statues and monuments and Noem’s remarks. The headline and wording has been changed to more accurately reflect her comments.

Except in their “corrected” version, The Hill still couldn’t give up on the phony Confederate angle. Here’s how the corrected part reads:

Noem did not mention Confederate statues directly in her remarks though her comments about “other points in history” strongly appear to reference it.

That is just nothing but straight up editorializing in what is supposed to be an objective news piece. It’s not clear if the writer, Tal Axelrod, inserted the correction in there or someone else did. But either way, it’s still a claim not supported whatsoever by anything Noem said in her speech.

The incorrect tweet received thousands of retweets, as Omri Ceren noted in a screengrab:

I can't believe we're expected to take lectures from the left about the corrosive effects of online disinformation, a presentation outlined in 4 slides. pic.twitter.com/dSn6J0lj01

But despite changing the headline in their story and adding a correction to the bottom of it, The Hill left the tweet up almost the entire weekend, only deleting it sometime Sunday afternoon.

As with the other reports from journalists at theNew York Times, WaPo, CNN, and others about Trump’s speech, only one conclusion could be drawn from The Hill’s false reporting on Noem’s:

Indeed. And in a presidential election year, no less. The mainstream media’s intentions could not be more visible.

The marxists fear her. How do I know? This is how they tell us who they fear.

The Hill is following Progressive religious doctrine to paint people in color blocs (“diversity”) and the New York Times style guide to form… force close associations with em-pathetic appeal and politically congruent (“=”) that can be exploited for social, economic, and political leverage. Both are forward-looking policies as tributes to the past.

Those times have ENDED and so has the Media.

The media has been Arkancided by their own hand.

If she had said it, she would have been right anyway…

This morning on NPR the hack reported that Trump was fighting to keep the Confederate flag as part of NASCAR. When questioned about that the “reporter” admitted he never said anything about it, but she said that everyone knows that’s what he’s thinking.
.
She’s a very confused mind reader, apparently. She thought she was reading Trump’s mind but it was really just what her colleagues truly were thinking.

DanJ1: This morning on NPR the hack reported that Trump was fighting to keep the Confederate flag as part of NASCAR.

Trump: “That & Flag decision has caused lowest ratings EVER!”

Making our point about leftists far better than we ever could.

What’s your point, Zack?
Commenting on something = fighting for something?

Any objective observer would have said DJT was merely stating a fact. NASCAR is making decisions that are driving away fans.

DaveGinOly: Any objective observer would have said DJT was merely stating a fact.

Any objective observer would say that Trump was deriding the decision about the Confederate flag.

Like Senator Duckworth’s statement on Trump’s speech, this is total Fake News. An absolute fabrication and an intentional lie.

Duckweed didn’t watch one minute of the speech

They are in deep fear of someone like Ms. Noem and will do anything possible to discredit her

And to NEVER trust any DC GOP “advisor”

Stay away from Karl Rove! Run the other way!

The Hill is the only site that has ever banned me. No justification, no notification, and no recourse. Just “sorry, you can’t comment here anymore, and if you don’t like it, talk to the hand.” Clearly says more about the Hill than it does about me.

The Hill went after John Solomon and tried to discredit him. This morning on their YouTube channel they insinuated that POTUS was hanging out with Epstein by showing an old photo of the two together with other people but forgot to mention that POTUS booted Epstein from Mara Logo almost 20 years ago.

Kristi Noem:
-Not mentally ill
-Not a criminal
-Not a GOPe piece of shit
-Patriot
-Competent
-Strong

The only degenerates who would believe the Hill are already for Biden. Not like they’re changing any minds…

IMO, Noem is what the media was hoping Gretchen Whitmer would be before she went dictator: Female governor, good-looking, rising star in her party, possible contender for higher office. Although Noem was SD’s Congresswoman for a bunch of years before becoming governor, so she has a great deal more experience than Whitmer.

Plus unlike Michigan in which places like Detroit and Lansing can keep Dems happily in statewide office for years despite what the rest of the state thinks about them, former Senate Majority Leader Tom Daschle can testify that it doesn’t matter if you’re one of the most powerful politicians in America, if you don’t keep your finger on the pulse of your state South Dakotans will drum your rear out of office like they did to him in 2004.

The mainstream Press will be the lubricant accelerating this nation’s decline. Damn them all.

One of the paradigms that always troubled me is that Thomas Jefferson was a great proponent of a free press… until he became President, when he grew to hate them with a passion. One of the silver linings of today’s situation is that this contradiction will never again trouble me.

Doing some research right now. Trying to identify how many leaders of the Confederacy who are represented by statuary were also “founding fathers.”
I’ll get back to everyone when I have some results.