“We keep forgetting about the victims. They have constitutional rights too — to walk down the street, to be secure in their homes.” 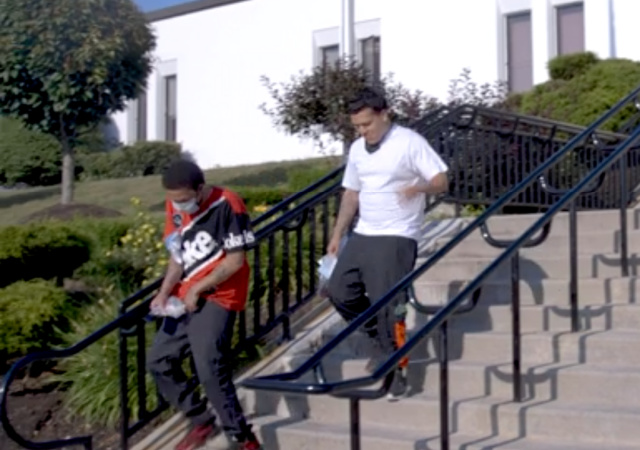 The Boston Globe reported that the Massachusetts Bail Fund wants to free everyone, but has waded into “controversial territory” since it has freed defendants facing serious and violent charges and long criminal records.

Private charities like the Massachusetts Bail Fund have received millions of money after the death of George Floyd in Minneapolis, MN.

The organization has not released how much it has raised, “but last week it posted $85,000 bail to free a single prisoner.”

From The Boston Globe:

Donors who rushed to support bail funds after the Floyd death likely thought they were helping to bail out jailed protesters, who typically face bail of up to a few hundred dollars. The fund bailed out scores of protesters arrested during the Boston demonstrations, but it has set free many facing more serious charges as well. [Joel] Rodriguez, for example, had been in jail for nine months before his release, serving time for assaulting and harassing several victims, according to court records. Now he’s out on bail for additional domestic violence charges, which he described to the Globe as “problems of love.”

The day after the fund bailed out Rodriguez, it put up $85,000 to free Karmau Cotton-Landers, 25, who is accused of shooting someone in the daytime on Boston Common in early April. When he was arrested, officers found a loaded firearm and ammunition in his Puma camouflage backpack, Boston police said.

On the day after Cotton-Landers was freed, the fund bailed out someone who had been arrested on looting charges hours after the May 31 demonstration in Boston. Darren McFadden also has an extensive criminal history including 60 cases in Suffolk County and a three-year prison sentence for robbing someone at knifepoint. The Bail Fund paid McFadden’s $2,500 bail on larceny and breaking and entering charges.

Executive Director Atara Rich-Shea dismissed “the Globe’s attempt to interview the people the fund had bailed.”

Those who donated in hopes of helping people arrested protesting or rioting after Floyd’s death should have looked at the fine print.

The Massachusetts Bail Fund will post bail for anyone “regardless of court history, charge, or circumstances.” The Globe continued:

For the fund and its supporters, a principle is at stake. If a prosecutor believes a defendant is too dangerous to release, they argue, the prosecutor should ask a judge to declare him or her dangerous and held indefinitely. Setting a high bail, they argue, is both unfair to the poor and ineffective at preventing crime.

“Why would paying a certain amount of bail make them any less dangerous?” asked David Rangaviz, a lawyer for the Committee for Public Counsel Services, an organization that represents poor defendants.

Law enforcement and victims rights advocates have come out against groups like the Massachusetts Bail Fund:

But victims rights advocates and some in law enforcement say the fund is enabling the release of potentially dangerous people with few or no court-ordered conditions to protect the public.

“It is a total injustice,” said Boston Police Commissioner William Gross, referring to the release of defendants charged with crimes of violence. “I’ll get criticized, but not by the folks in the neighborhoods. They are the victims of crime and they feel left out.”

Freeing them, he said, sends the message to those inclined to commit crimes that there are no consequences.

“We have seen an uptick in violence,” Gross said. “I have no doubt that some of the violence is attributable to” people out on bail.

“I would never deny anyone the opportunity to be bailed. But … what about the victims? We keep forgetting about the victims. They have constitutional rights too — to walk down the street, to be secure in their homes.”

The Massachusetts Bail Fund (MFF) is not the only one facing controversy. In June, reports showed the Minnesota Freedom Fund only paid $200,000 in bail even though it received more than $30 million from people.

MFF upset people, even more, when it decided to use the money for “legal support for those arrested or incarcerated protesting the murder of George Floyd, and our core values and mission.”

Your only important to the left as a victim is they can leverage that victimhood.

Are they liable for the crimes committed by criminals the bail out? In civil court?

Sums up the entire faulty issue with liberalism qua leftism.

This single prisoner now has no skin in the game. It wasn’t his own money or the money of the other family members. When the bail money comes from those sources the prisoner can feel the loss if he decides to go on the lam. But here, because he has no personal responsibility on the bail money, because he has no accountability to all those bleeding heart donors, he can skip out. These loons who paid the bail have no assurance that the prisoner will ever show up for hearings, trial.

The “loons” who paid the bail don’t *want* the prisoner to show up for the trial. Their intent is to terrorize law-abiding citizens.

Part of the social contract between citizens and government is that citizens will forgo vigilantism as long as the government pursues justice on behalf of the citizens. If Government reneges on that bargain then Americans will begin to take the law into their own hands. It took a long time to condition people to let the justice system handle things through the courts. It will introduce a lot of chaos if things revert to frontier justice. The political class will not be spared.

This is pretty much what my husband said, but he used much more colorful language.

Which is why the want everyone disarmed. Scared, dazed and confused willing to obey without question.
Working well with the masks, we’ll see an escalation into of demands that you WILL wear your mask inside your own home.

NOW, THEREFORE, I, Bertha Henry, the Broward County Administrator, pursuant to my emergency authority under Sections 8-53 and 8-56 of the Broward County Code of Ordinances,
Section 4. Responsibility to Ensure Compliance with Applicable Orders.

All persons who reside on any residential
property, whether single family or multi-family, and irrespective of whether they own or
rent the property, must ensure that all persons on the residential property, including
guests, comply with all applicable guidelines of any Broward County Emergency Order,
including the facial covering requirements.

None of these turds tried in Blue areas (under State or local law) will get anything approaching what they deserve.

Maybe I’m missing something, but I thought the purpose of bail was to ensure the defendent would show up for his court date and not skip town. If the bail money isn’t even his, what incentive is there for him to show up in court?

In setting the thugs free maybe the judge should be indemnified for their return to court if no one else does. With bail bonding there was always an implicit agreement that skipping bail ment those holding the bag sent their “friends” to collect….

Bail bondsmen have every intention of regaining their money. To get a bail bondsman to post your bail, you basically sign away all your rights to the bail bondsman: he and his agents can break into your residence (AND any residence where you’re staying, which is legally nonsense; your cousin gave you permission to crash on his couch when you couldn’t afford rent, he didn’t give you permission to allow third parties into his residence, let alone to break down his door — therefore you don’t have those rights to give to the bail bondsman), can apprehend you at any time, will send you back to jail if the bondsman thinks you’re likely to skip bail, etc.

I think the point here is that having the nonprofit put up the actual money bypasses the bail bondsman entirely. If there is a default, I doubt the nonprofit is going to hire bounties to fetch the perp.

Maybe I’m missing something, too, but Americans have a constitutional right to a prompt trial. If that’s inconvenient for the government, tough s*t, they need to do the gd jobs we pay them to do, not kick them down the road while they’re busier pursuing sexier and way less constitutionally justified programs. ‘

If a guy deserves to be in prison so badly, give him a trial, sentence him, and put him there. Don’t just essentially hold him for ransom in some pretrial jail and let that make you feel safe — somebody may just pay the ransom (and now they are).

As long as these violent felons stay in Massachusetts I can’t really say I care what these fools do with their money.

Why were they granted bail in the first place?

I seem to recall George Zimmerman being hammered by the judge for bail, because every time the family was able to raise the cash for bail, the judge would get angry and crank up the numbers again. Judge Lester raised it when he tapped his retirement money, raised it again when a GoFundMe type effort brought in enough money to make it again, then cranked it all the way to a million bucks. Everybody knew if he didn’t make bail, he was going to be dead before trial, but there didn’t seem to be any pushback at all from the authorities about the bail ratchet racket.

I am still pissed about bald faced black racism directed at George Zimmerman and many other people. These pricks feel entitled to break the law and violate white, perceived white civil rights, and in practice any member of any other race if they feel like attacking.

There has been away too much black BS and liberal-Marxist BS masquerading as black BS.

By and large, blacks do not seem get get that they are being used and abused by middle eastern and Marxist groups, and that blacks alone will suffer for this.

Is there any legal liability on behalf of the Massachusetts Bail Fund is the suspected criminal they bailed out commits crime against a person or private property?

Naah—the victims of violent crime have no rights: they are simply wallowing in their white privilege of having the police give them a sense of security they do not deserve. —What? You mean a lot of them are people of color? Well, if they think they are entitled to police protection, they are being “white” then, and deserve no favors. (I’ll bet you didn’t realize that being secure in your property and person wasn’t a ‘right,’ did you?)

I bet these guys getting bail money are “mostly peaceful”.