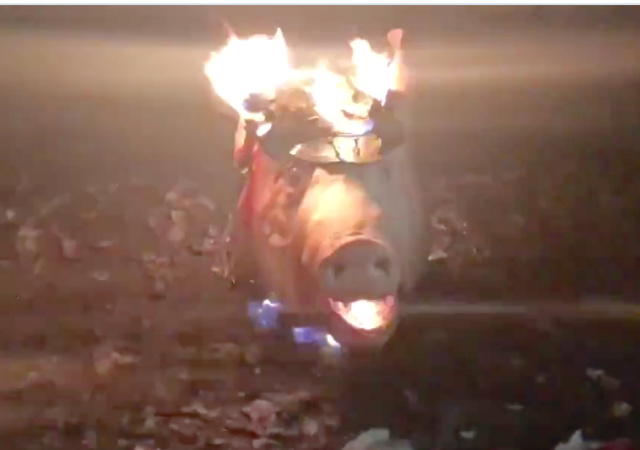 Journalist Andy Ngo posted a video of ANTIFA rioters in Portland, OR, setting fire to a bloody pig’s head with a cop’s hat on it.

ANTIFA has a history of weaving pigs into their riots.

Antifa protesters dumped a bloody severed pig’s head on an American flag outside the Justice Center in downtown Portland. They put a cop’s hat on it and set all of it on fire. #PortlandRiots #antifa pic.twitter.com/qfAOT4ItxP

Last night was not the first time a severed pig’s head was used as a threat to law enforcement in Portland. In the early weeks of the riots, a burnt pig’s head was left at the base of the now-gone elk statue. This was long before federal agents showed up outside the courthouse. pic.twitter.com/uzgeOjo46X

The riots have been going on for over 60 nights in a row.

Police rescued an abandoned pig in Portland a few weeks ago. They think a rioter abandoned it after he or she decided not to kill it.

People found a burnt pig’s head around the base of a now-removed statue weeks before the federal agents came to town.

Burning pigs has been popular with ANTIFA. It began in Ferguson, MO, in 2014 when rioters chanted “pigs in a blanket, fry ’em like bacon.”

The chant didn’t become prominent until December 2014 when a man executed NYPD officers Wenjian Lu and Rafael Ramos. His last Instagram post said, “I’m Putting Wings On Pigs Today. They Take 1 Of Ours…Let’s Take 2 of Theirs. This May Be My Final Post … I’m Putting Pigs In A Blanket.”

An actual bloody pig head? Maybe the Antifa weirdos and the Peta nut jobs will kill each other.

notamemberofanyorganizedpolicital in reply to Dennis. | July 31, 2020 at 9:58 pm

To say nothing of the global warming nutjobs.

Where is Al Gore with his ton of lard when you need him.

Lord of the Fascists.

Think the pig headed is a self portrait of antifa.

Maybe we could fry both Antifa and Peta?

notamemberofanyorganizedpolicital in reply to Dennis. | August 1, 2020 at 1:14 pm

Planned Porkhood (PP) is so forward-looking.

Disgusting. Even for those of us that eat animals, we still should treat the animals with a sense of dignity. I don’t know exactly define it, but these thugs certainly violated it.

Did Trump not officially designate Antifa as a terrorist organisation? If not, why??

Ask the NBA and NFL to wear Colin Kaepernick socks.

Should add that this is not surprising, considering the elements involved.

In the end, it will probably help Trump because the Democrats enable them.

Next up: a burning cross.

Not a cross, not yet, but statues, certainly. Diversity is a progressive condition. #HateLovesAbortion

It was Bibles and flags last night

In my darker thoughts, I can see where, once the election is done, regardless of outcome, a lot of these ANTIFA A-Hs are going to disappear. Some just disappear and some show up as rotting corpses out in the desert.

The deplorables are biding their time. As the saying goes, “every dog has his day”.

I found Hillary talking about deplorable ironic, since it was her flock which are deplorable.

I rather suspect that we have separated irrevocably as people and nations. There will be consequences and they are not going to be pleasant.

Shades of Lord of the Flies.

Somehow this conjured to mind the image of Antifa accidentally setting a flaming pig loose in the midst of one of their own protests?

So peaceful. I’m feeling the harmony. Aren’t you?

These are terrorists. Take them seriously. The only option is when.

And our only option is to win.

The only reasonable, as in prudent option, is summary termination.

See now that’s a counterproductive attitude. I mean these Antifa Larpers have about as much in common with real terrorists as the folks at the Society for Creative Anachronism have with actual medieval knights. The real problem isn’t anything Antifa does, they are very obnoxious but mostly harmless, it’s that a significant portion of the electorate thinks that the idiots setting fires on the steps of the federal courthouse are the good guys. That’s bad because it will lead to more loony left DSA AOC type people getting elected to public office and passing bills that are bad for America.

The problem needs to be viewed in political rather than military or law enforcement terms.

Whatever happened to old-fashioned values. People came to America in order to live in freedom, to practice their religion freely, to escape poverty or oppression, and to make better lives for themselves and their children.

They set goals and priorities for themselves such as:

But these people today have none of these goals and values. They are filled with filled hatred and contempt and have made their priorities protesting, stopping traffic and causing trouble for those who are there to protect them. They are continually on the verge of violence and they have no concept of American values and what made this country great. I ask you, what does the future hold for such people and for out country?

How did these people become so much like palestinians, I am certain that palestinians cannot be cured, and it troubles me that we have something similar here.

Why haven’t the feds tried the one thing all leftists fear more than anything?

It always sends them running for their safe spaces.

Using pigs for sport activism? Yeah, that will resonate well.

The truly amazing thing is that the entry in “Stuff White People Like” about Portland was spot-on then and spot-on now, especially the references to Lord of the Flies.

There was also a reference to claiming that they were part Native-American, and this was back in 2008.

I don’t need to read any books, major. If you’ve read any of my comments on other threads then you know I grew up in the San Francisco Bay Area. I know these people like know, well, the back of my hand is so cliche. Feel free to imagine other body parts, not necessarily my own, I that over decades I became familiar with in the dark of night so I could know them by braille.

The thing is they talk like they’re tough. But the it’s only talk. I say let’s get it on because I’m sick and tired of their gas.

Seems to me that tracking down where that pig head came from might be productive.