Gibson’s had argued “Those who ignore the record, and distort the record, cannot be considered a ‘friend of the court.’” 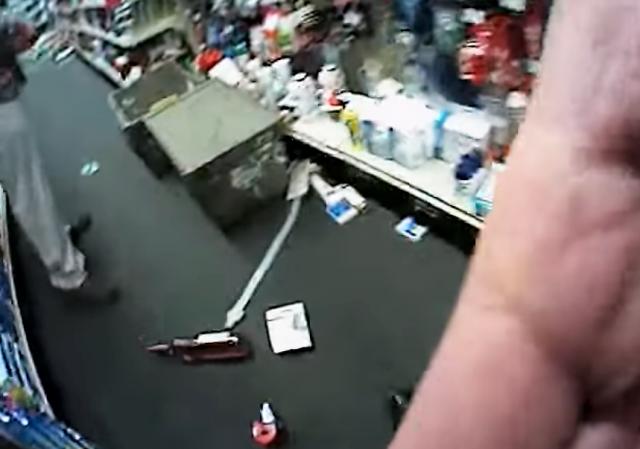 The appeal brief of Gibson’s Bakery opposing the appeal of Oberlin College and Meredith Raimondo is due on August 5, after Gibson’s motion for a final extension of time was granted by the appeals court Magistrate. Gibson’s previously filed its Cross-Appeal Brief, seeking reinstatement of the full punitive damages verdict.

While the regular briefing has been pending, a group of media and other groups asked permission to file so-called Amicus (friend of the Court) briefs in support of the college’s appeal.

I covered those motions, and the Gibson’s opposition, in these posts:

The Gibsons’ opposition centered on the claim that the proposed Amicus Briefs, among other things, were not postured as “friend of the court,” but rather, friends of Oberlin College, ignoring the actual record in the case and in some cases misstating the nature of the Gibsons’ claims.

That was similar to the points I made as to the NAACP brief:

The NAACP [proposed] Amicus Brief is the easiest to deal with. It’s a political document, not a legal argument. It’s clearly meant to try to shame and/or bully the court into thinking this case has national implications for race relations….

Despite being drafted by the national law firm Jenner & Block, it bears almost no relationship to the actual facts of this case. It pretends that this is a case about Oberlin College being held liable for supporting a student boycott of the bakery. It then cites cases about how support for boycott activity is protected, and how government officials can’t sue people who protest against them. None of that has anything to do with the legal theories upon which the Gibsons recovered….

That is a complete misstatement of what the case is about. A shocking misstatement, but the point of the brief clearly is to make this a case about race, which it is not.

All that said, I predicted:

What’s the likely outcome of the motions? The Court will allow the Amicus Briefs to be filed, but then ignore them.

The various Amicus groups filed their Replies to the Oberlin College opposition. The gravament of the Replies was that objecting to the substance of the motions was not a ground to deny the filing, and that the Gibsons were using the opposition as a chance to expand their page limits on their substantive briefs:

And now, drumroll, the decision:

Upon review of the motions for leave to file amicus curiae briefs in support of
appellants and the responses in opposition, each of the motions is hereby granted, and the
amicus briefs are accepted. Pursuant to Loc.R. l(B) and 3(A), however, none of the entities
filing the amicus curiae briefs are deemed to be parties to the appeal, nor may they
participate in oral argument 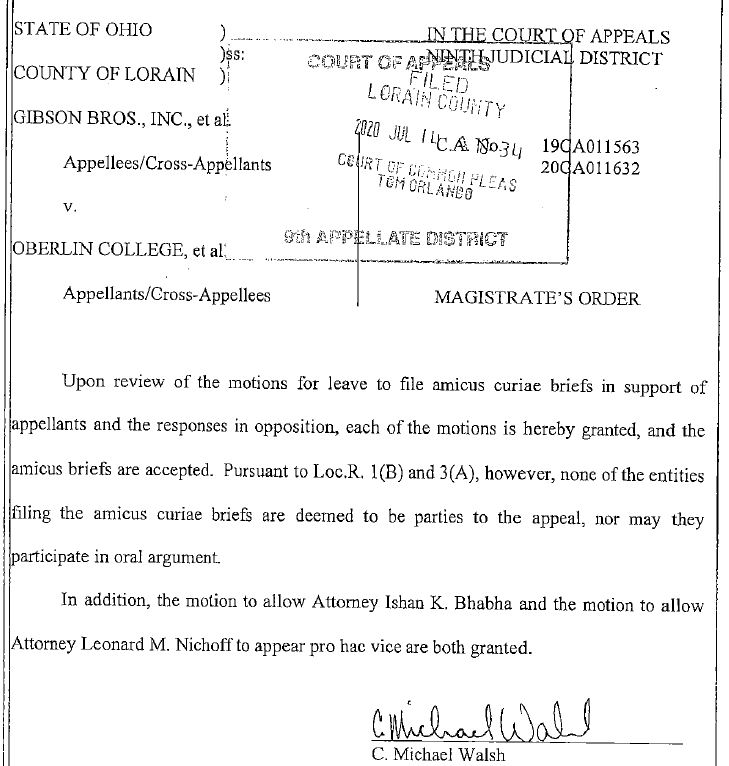 There was a similar joke in debating, have a reference card that said “Argument weak, yell like hell”

Let that be the last bit of good news for Oberlin, Raimondo et al.

I think this is semi-good news for everyone. It creates grounds for higher appeal if the briefs are denied. Now, they can be admitted with no grounds for appeal, but the Gibsons’ attorneys have made their point quite clear as to why the briefs submitted to this point should be deemed irrelevant to the case at hand.

just a bunch of busy work at multiple law firms

Times are tough, they appreciate a deep pocketed fool like Oberlin.

I wonder what the Total Award plus interest is worth now? Maybe, the Judge should hit Oberlin for more money to be set aside, to cover that too.

If the Judge is not determining additional costs for extending this legal circus he/she is not doing his/her job. The Gibson family has been victimized horribly by a Justice system gone bad in Ohio. Time to end it.

Gibsons, Covid, and Title IX. A few years ago I was thinking the movie of the debacle should be called “Do The Wrong Thing” as a play on Spike Lee’s film, because every single time that Oberlin was given a choice, well, they did the wrong thing. But now I am thinking “Perfect Storm II” is fitting.

Passive stupidity – Wait until cornered and then do something stupid.

Aggressive stupidity – Take the initiative to do something stupid.

Oberlin seems to oscillate between the two. Marxists are not smart people. They are evil people.

Will they have any students this fall?

The college pipeline of incoming students has been destroyed.

“Back To School? “No Thanks” Say Millions Of Newly Homeschooling Parents
…..

Poorly thought out by the parents. Covid is of almost no risk to kids – much less than the seasonal flu I have read. Home instruction or remote learning severely interferes with the employment and finances of the parents. In the younger grades, remote learning is considered (by educators) as largely worthless. If schools have any standards at all, are these parents willing to have their children repeat grades, when they do not learn what they are supposed to learn?

PS – The social consequences of young children basically locked up at home are widely reported as serious.

But if you let them go to school, they have to come back home. And who’s there at home? Maybe Grandma?

The consequences of adults locked away at home isn’t much better. I predict that Oregon will have an increase in suicides that will exceed the number of Covid associated deaths.

Home instruction or remote learning severely interferes with the employment and finances of the parents.
Not really true. A LOT more people can successfully homeschool than think they can.

And very few homschoolers keep their kids “locked up at home.” And those few are problem families to begin with. We had co-ops, play groups, outings….

MajorWood in reply to notamemberofanyorganizedpolicital. | July 17, 2020 at 1:40 am

Oberlin has gone from 2 sessions of 3000 students to 3 sessions of 2000 students for 2020-2021 school year. My SWAG, which was explained in a previous Oberlin thread, predicts 1700 (fall), 1500 (spring), and finally 1200 for the new “summer” session. Parents and students are still pretty bait-shy about plopping down money for something likely to get cancelled. The Dems strategy to win the election by shutting down the country is going to kill off way more of them than us. There are rumors that Oregon may go to mandatory masking for the rest of the year. That’ll sure make people want to commit hard earned dollars.

Are you sure mandatory masks in Oregon might not be to prevent identifying all the “peaceful protesters” in Portland.

As far as Dems getting hurt worse in the election by their strategy of shutting down the country goes, I think the average person may not appreciate that issues opening K-12 schools in the Fall are almost exclusively a local matter and will be angry when they enter the voting booth. Incidentally, the undiscussed elephant in the room is that traditionally if you do not master the curriculum for a grade you repeat the grade. Distance learning is largely worthless for young children.

“The NAACP [proposed] Amicus Brief is…a political document, not a legal argument. It’s clearly meant to try to shame and/or bully the court into thinking this case has national implications for race relations…Despite being drafted by the national law firm Jenner & Block, it bears almost no relationship to the actual facts of this case.”

And that calls attention to the shameful decline of not only the NAACP but many “civil rights” organizations: A legal brief should be legal, not political, and such organizations should not try to bully courts with political shaming, especially with falsehoods and defamation.

Falsus in uno falsus in omnibus: and so into the trash can with the NAACP and most of the “civil rights” industry.

Isn’t everything political to a Marxist? Rule of law is anathema. The law is no more than a weapon to a Marxist.

Couldn’t you say that the judge allowed the amicus briefs so as to put on record the intense political pressure the court is contending with? After all, he is also putting on record that they are not friends of the court by denying them a right to argue before the court. Isn’t that unusual?

I’m not accepting that argument. Judge’s have authority, but some are afraid to use it. If an argument has no legal merit, it’s up to the Judge to state that and not consider it. That IS what Judges are paid to do.

So did the judge’s actions help or harm anyone? Seems to me he rendered the briefs worthless only costing him the 30 minutes or so it took for him to read them. I think it helped. It also put an important political dimension on record for eternity.

I would have denied the admission of the amicus briefs simply on the basis that attempting to introduce them as part of the appeal is too late and that they should have been introduced at the original trial where they might have made more impact/sense to consider them.

Copies of the 4 amicus briefs, the 4 Gibsons responses, and some commentary are posted at https://oberlinchaos.com/litigation/oberlin-call-to-arms/ for the readers of LI.

Legal games and denial of swift Justice to the Gibson family continues. When is the Ohio Court System going to stand up to these legal shenanigans and dispense long-overdue Justice? This is shameful.

As a nature lover and someone that has always been concerned about the environment; I believe that it is now necessary for Oberlin College to be compelled to fund an independent group to produce a cost benefit analysis of demolishing & returning the College grounds back to its pristine natural environment or turning the college into an Indian Casino.

Agreed. They have to have stolen that land from somebody.

Now, as every dutiful liberal should do, we have to find said injured party, drum up hostility, and teach them the power of victimhood to get what we want.

If they don’t want to comply with our way, we will just deride them as race/gender/orientation traitors and find a good white rich liberal to speak for them and over them.