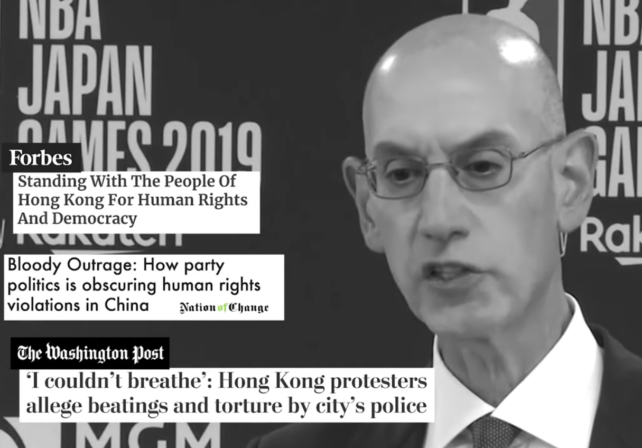 The NBA announced Tuesday it had “terminated its relationship with a league-run training academy in Xinjiang, China—the region in which the communist nation is reportedly holding roughly one million Uyghur Muslims in concentration camps,” reports Collin Anderson of the Washington Free Beacon.

“The NBA reportedly continues to operate a training center [in] Xinjiang,” Blackburn wrote. “What steps is the NBA taking to shutter this location?”

NBA deputy commissioner Mark Tatum responded to Blackburn’s letter Tuesday, writing that the league “has had no involvement with the Xinjiang basketball academy for more than a year, and the relationship has been terminated.”

Blackburn praised the league’s decision to “abandon its footprint in Xinjiang,” calling it “the right way to condemn Chinese oppression.” However, the GOP senator criticized Tatum’s response to scrutiny over the league’s relationship with Chinese tech giant Alibaba, which Blackburn described as a “state-owned enterprise.”

Tatum revealed that the league has a “multi-year contractual relationship” with the company and downplayed its ties to the Chinese Communist Party (CCP), noting that “Alibaba is listed on the New York Stock Exchange and Hong Kong Stock Exchange, and most shares are held by institutional investors.” Alibaba’s founder and former chairman, Jack Ma, is a CCP member. Blackburn said the league’s continued partnership with the company “remains a cause for concern.”

“Chinese companies are notorious for stealing American intellectual property and technology, and these thefts have cost our businesses billions of dollars,” Blackburn said in a statement. “The NBA’s continued financial relationship with Alibaba requires a closer look.”

Sen. Josh Hawley (R-MO) has also been vocal about the NBA’s unholy alliance with China and the league’s unwillingness to condemn China’s totalitarian violence against ethnic and religious minority groups, while at the same time condoning and encouraging players to publicly deny support of American law enforcement and military.

I mean, great, but this is nowhere near good enough.

Excellent. Now close the two NBA stores in China and stop any manufacturing of NBA branded merchandise in China and you will really be doing something.

This move is just meaningless window dressing for the easily placated.

This is a good primer on the NBA/China connection:

Nice but let me see how much this adjusts my Do Not Give A F About The NBA meter.

Checking….
Any second now, I’ll have the results.
Sorry, it’s taking longer than I thought.
OK, here it is.

Can the NBA players put social justice messages on their uniforms supporting Chinese dissidents and victims of China’s concentration camps?

I suspect the answer is, “No because shut your misogyny hole you racist.”

Of course not. The materials and labor inputs required for use on NBA apparel can only come from NBA corporate affiliates, all of whom seem to utilize Chinese slave labor.

No NBA player would dare kneel during the playing of the Chinese National Anthem.

If they do it will be explained away by CCP Media and MSM as a “Sign of Respect”!

the player was taking his time tying his shoes, made in China of course

Because they’re the “sorry they got caught” kind of sorry. If they’re sorry at all.

Thankful to that Houston Rockets coach (free Hong Kong) for opening my eyes to the monetary influence China has in the U.S. Also thankful for exposing the NBA mealy-mouths. Haven’t watched or listened to a game since Gary Glitter was blared at the United Center in the 90’s. 🙂

Nosferatu only sees a large market to sell his awful entertainment product to.

How in the world did Silver get Commissioner LeBron to change his stance on China?

The reason that the connection with the training academy has been severed is because NBA officials and players have finished their training in running concentration camps.

Is this a joke? The jerk BLM NBA players think slavery is OK? OK. That is the end of you.

Is it just me or was Adam Silver separated from his twin bother Nosferatu, at birth?

I really should get out more. I had no idea the basketball biz was so advanced.