In response, ESPN said they’d deal with Wajnarowski. Because that’s the problem here? 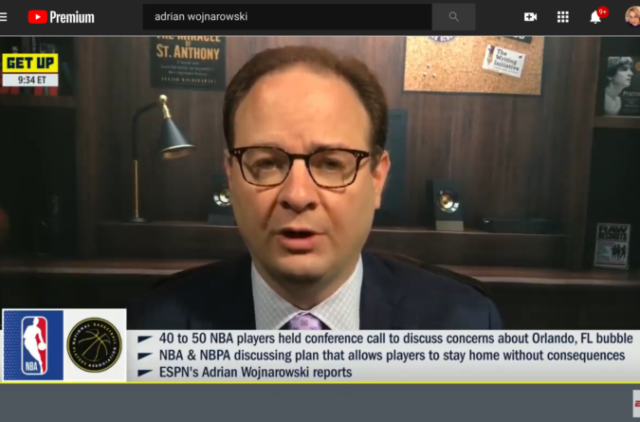 Friday, Sen. Hawley’s office sent a press release blasting the NBA for their support of China and lack of support for law enforcement and our armed services.

ESPN insider Adrian Wajnarowski responded to the mass email with the f-bomb.

Whether it was Hawley himself or the staffer running his account, the email was screen grabbed, and tweeted. And thus the drama began.

In response, ESPN said they’d deal with Wajnarowski. Because that’s the problem here?

Don’t make @wojespn apologize. He’s just saying what he really thinks. Call out the @NBA. You know, your job https://t.co/qLX5VsdO6R

How much money does @espn @Disney @ABCNetwork make from @NBA in #China? Just asking

This who they are: smugnoramuses bent on taking us off a cliff with them.

Our work is to let them go off the cliff alone. (Trying to convince them of anything is a waste of time. They will only learn through pain.)

How do we do that? Because they will only go off the cliff when they can take a good portion of the country with them willingly, unwillingly, or even unknowingly…

Here’s how you do it, starting with your own family: apply the carrot/stick approach.

You might lose some of your children for a short time (they’ll be back), but cut-off their money, cut them out of your wills, and otherwise react to them like the street criminals they are.

Or: accept your fate.

notamemberofanyorganizedpolicital in reply to TheFineReport.com. | July 10, 2020 at 9:24 pm

You forgot to add….

HEY DETRITUS that CHICOM check will stop coming doesn’t matter what Josh does.

….You, the thinking man’s way of unburdening his mind.

Prime example of loyalties. The NBA, a group of semi literate jocks, who have been scholarshiped through life, demonstrates their principles.

As if we needed yet another reason to not watch ESPN and the NBA.

Need to push back much harder on China.

Every time they make these aggressive maneuvers towards India, Taiwan, Hong Kong, South Korea (through proxy), every time they support terrorist sponsors like Iran, every time they steal intellectual property…we need to confiscate Chinese purchases on US Soil…Smithfield foods, AMC and other entertainment properties, GE, IBM, Motorola, etc.

If we don’t hurry up, we’ll push back against China and realizing we’re pushing our own backs, because they totally ‘own’ us, via our corrupt politicians and corrupt media and teachers.

But I have started to boycott Chinese made goods, at least when I can find alternatives. I still eat Chinese food, but it is made in the US of A.

The next line after the f-bomb is also interesting. the “Sent from my iPhone” is the default email signature automatically appended to emails sent from replies made on (obviously) an iPhone. This hints strongly that it was not done by a ESPN staffer sitting in an ESPN office, unless Woj has given his email account and password to some staffer who sent this reply from the staffer’s iPhone. Once set up it would be easy to do, but the personal nature of an iPhone indicates it wasn’t staffer in the office monitoring emails.

Right. I’m stimulated by this complex of facts to theorize below.

ESPN’s ratings weren’t good before COVID-19. They must really suck these days.

The fonts used in the three Communications tell you
which one Adrian ESPN write, and which other two were written by others with a larger vocabulary and more self control:

I think the pro sports world is in for a rude awakening. They went political and on the wrong side.

Pro sports? Is that the world’s oldest profession??????

Unless, unless . . . The ESPN commentator’s concise response to the senator was an intended, maybe coordinated expletive with, on first or second thought, the network’s blessing. See how this quite reasonably possible and oft-repeated, proved (some say, conspiracy; CCP-NBA-ESPN/Anybody else interested says, necessary and strategic) theory runs?

Let ESPN insider Adrian Wajnarowski speak indirectly for any and all CCP-sponsored, $$$-making cronies — including, this theory runs, for ESPN and its vital ad-watching and consumer-product-consuming, basketball-loving public.

Moreover, let all see what ESPN wants its viewers to feel: 1) we don’t do Republicans’ windows; 2) with your generally indifferent but particularly reliable support of an NBA steeped in a strong liquor of CCP influence, we’re inarticulate and not inclined to cogently defend, as would be civil, our pro-CCP, we’re-the-world sort of de facto citizenship; and you should all vote with your sympathies, accordingly, come November.

We may never know the truth therein (and the depths to which our latent, now fully-fledged enemy is going to win the world in its very own, criminally ruthless, satanic way). What is that mythical, worldly lord’s favorite sin? Ah, yes, vanity: ours.

What was Lenin/Stalin/Marx et als’ favorite irony generally, in one version or another? Capitalism will process the hemp and make the rope we’ll noose and use to hang it. Cynicism is this new game runs rampant.

The CCP is certainly and fondly capitalistic, but it isn’t, by any stretch of the imagination, also free and brave, like we Trumpian-Americans want to remain. In the end, the CCP hates us, I reckon, because of that real distinction. They’re altogether ersatz, while we who still fight and resist their entire deviance are wholly and demonstrably the real deal.

The CCP is intent on changing how the main, underlying game is played in the world arena and they’re finding plenty of willing, usefully idiotic, financial-quarter-obsessed fools around the world to participate.

The bloodily costly, net-successful assaults on Normandy and Iwo Jima used to mean something to Americans. In our collective mind, their place in history kept us free and brave.

Not so much anymore, not so much. Our very expensive vanity is increasingly over the top, and we’re paying our dues while we destroy our long-cherished, free and brave existence.

The satanic, cynical and sadistic CCP is watching us self-destruct, and we’re too dismayed, maybe too indifferent to stop it, maybe.

Or, maybe not. Four months to go.

As a somewhat athlete myself I have always enjoyed watching the power and physical grace of great athletes BUT once they attach political signs to their jerseys, expound on political ideas, attack politicians and people’ who don’t think like them then they have left the sports arena.
I think that this time there will be financial repercussions for football, basketball and probably, baseball. Bluntly put, sports fans, who are mostly White, don’t like to be lectured on race and political ideology by millionaire Marxist’s and racial justice warriors.
I, for one, have opted out.