Prime Minister Modi: “This land is the land of the nationalists who are always ready to sacrifice for India” 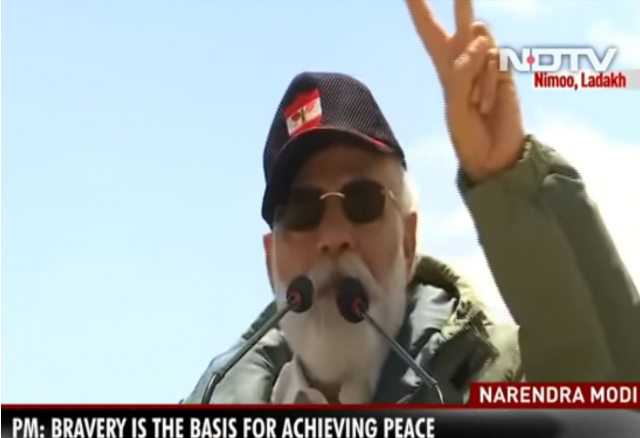 “The age of expansionism is over,” Modi warned Beijing, addressing Indian soldiers. “Those who are driven by expansionism have always posed a danger to the world. History bears testimony that such forces have either been destroyed or been forced to turn back.”

Indian Prime Minister vowed to fight back Chinese military aggression, refusing to give into Beijing’s territorial demands. “This land is the land of the nationalists who are always ready to sacrifice for India,” he declared on Friday.

China does not recognize large parts of its 2,100 mile-long border with India, and has staked claim on 35,000 square miles of Indian territory. This is in addition to 15,000 square miles already under Chinese occupation following the war of 1962.

On a quiet visit to Ladakh designed to deliver a loud message to China, Prime Minister Narendra Modi told soldiers posted along the Line of Actual Control that the courage they had demonstrated had sent a message to the entire world. Addressing soldiers deployed in Ladakh, PM Modi said tales about their valour were being spoken in every house across the country.

‘The enemy has seen your fire and fury as well,’ PM Modi told the soldiers in an address telecast live from Ladakh to the country. PM Modi also referred to the violent clash between soldiers of India and China at Galwan on 15 June and paid his tributes to soldiers who laid down their lives.

“From Leh, Ladakh to Siachen and Kargil…and Galwan’s icy waters…every mountain, every peak is witness to the valour of Indian soldiers,” PM Modi said. “You have given a befitting reply to people who attempted to conquer,” he told them before going on to deliver his direct message to China. (…)

Without naming Beijing that has been trying to encroach into Indian territory in Galwan valley and Pangong Tso and create new boundary disputes, PM Modi said times had changed and the era of expansionism was over. This is the time for development, not expansion, he said.

PM Modi stayed on target and continued hurling darts at China. The expansionist policies of some countries had affected world peace, he said, a clear reference to China that has disputes with 21 of its neighbours. (…)

His arrival in Leh had already delivered the first set of messages to Beijing. It also contrasts India’s approach to the standoffs along the Line of Actual Control to Chinese leadership’s efforts to signal a hands-off approach.

The Chinese invasion and the slaughter of Indian troops triggered a wave of anti-Beijing sentiment in India. Indian celebrities, trade unions, and retailers joined the growing call for a boycott of China-made technology and products.

The border conflict between the two nuclear-armed nations may not subside anytime soon as satellite imagery showed heavy military build-up on both sides of the international border following the June 15 clash.

The current stand-off with Communist China is the biggest military challenge for India in nearly fifty years. China’s economy is five times that of India. China can muster 21 million troops, far larger than 14 million active duty soldiers on the Indian side. Beijing spent an estimated $261 billion on defense last year, compared to New Delhi’s $71 billion. China has an equally formidable edge in defense manufacturing and advances military technology.

Despite these asymmetries, China should not underestimate India militarily. It is one thing to push around Taiwan or the Philippines, and quite another to invade a nuclear-armed neighbor of comparable size, population, and resources. As I wrote in a recent article for the Gatestone Institute: “Despite China’s military superiority and economic clout, an armed conflict with India would not be a walkover. Apart from the India-China war of 1962, India has not lost a single military conflict.”

The communists have had this all mapped out and planned – for a long time.

First, they bought our politicians (starting with bill clinton).

Then they unleashed hell within the US, with the help of obama, pelosi, biden, kerry, clinton etc. With hell unleashed within the US, they have been embolded to take Hong Kong. Next is India’s border. Next is Taiwan.

We have to kill the human virus within our own borders or the world is toast.