“statue would be moved from its current location at the Sondra and David S. Mack Student Center to behind the school’s Emily Lowe Museum” 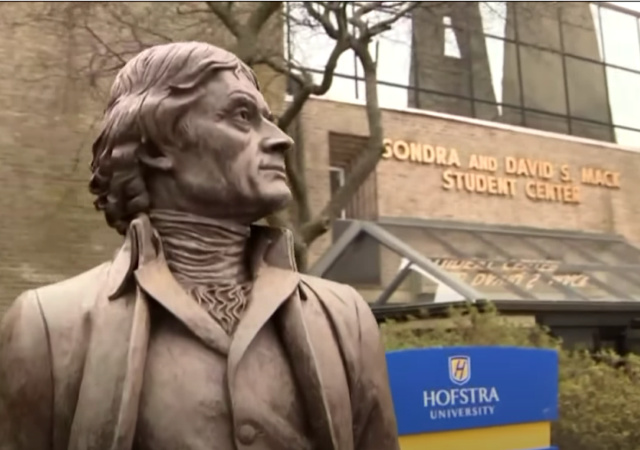 Student activists have been trying to remove this statue for years. The school finally caved and agreed to move it to another location on campus, but that’s not good enough for the students.

Hofstra University has finally buckled to student demands calling for the removal of a statue of Thomas Jefferson … sort of.

According to the island now, Hofstra President Stuart Rabinowitz announced on June 23 the statue would be moved from its current location at the Sondra and David S. Mack Student Center to behind the school’s Emily Lowe Museum.

Rabinowitz said the decision was made “with the help of the university’s Committee on Representation in Public Spaces.”

“Institutions, like people, evolve, and come to new understandings based on the work and words of activists and leaders,” Rabinowitz wrote. “It has become clear to all of us that the pain of our Black students and citizens in regards to the symbols and representation of our national history is substantial.”

Two years ago Rabinowitz had struck a different tone, stating in reaction to student demands he thought it was “a bit of a stretch to say Black Lives Matter applies to the Jefferson statue.”

The statue repeatedly has been a target of vandalism, including the word “DECOLONIZE” and Black Lives Matter slogans.

For student activists, the decision to move Jefferson doesn’t go far enough. A Change.org petition went up the same day as Rabinowitz’s announcement calling for the statue to be removed completely.

The petition notes the new location houses the university’s Department of Drama & Dance, “two fields of performance that are systematically structured to disadvantage people of color from advancing further or to the level of their white counterparts.”

Student “activists” a have no way in how the university is run! They are there because they are ignorant and supposedly want to learn! Activism, social “justice”, demonstrating, rioting, looting, and arson have no place in the higher education system. Those both students and half assed “professors” that engage in any of these activities need to be removed from the educational system for life! Then maybe the university’s will be able to truly educating those Whitfield desire to learn and contribute to society!

They should leave the statue where it stands, isolate it from the ground, and have sensors to turn on a neon sign transformer, electrifying the statue when necessary.

There should be an array of security cameras, anyone caught vandalizing should be expelled, and banned for a period of 5 years, from attending any college.

Giving in to a blackmailer only leads to further blackmail. If the President gives in on this one, the Mob will smell blood and will continue to make further demands.