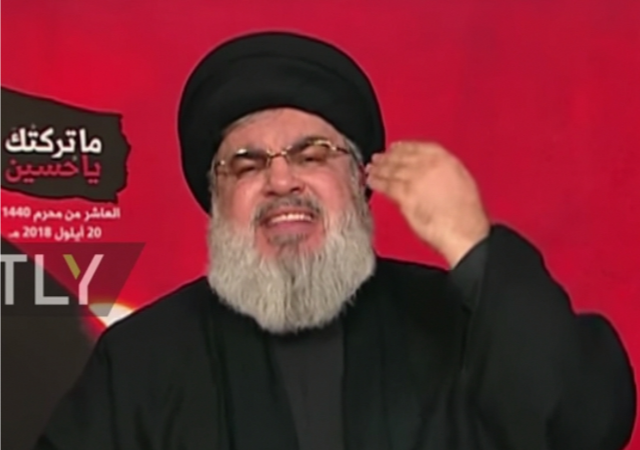 The Islamic terror group Hezbollah is hoping for a Chinese bailout as Lebanon suffers its worst economic crisis in decades. Hezbollah leader Hassan Nasrallah in a televised speech told his Lebanese followers to “look east” to Communist China for their economic rescue, media reports said.

The Hezbollah chief is backing a Lebanese government effort to seek Chinese support in salvaging the ailing economy. “Prime Minister Hassan Diab’s government — supported by the Iran-backed Hezbollah and its allies — is seeking help from China, an approach that the Shiite militant group strongly supports,” the Associated Press reported this week.

Hezbollah chief Nasrallah’s statement comes as Iran is close to striking a similar deal with China. Beijing is expected to invest around $400 billion in Iran in return for unbridled access to the country’s oil and natural resources, as well as access to Iranians militarily and air bases.

Communist China wants to bring the tiny, but strategically-located, Mediterranean nation within its sphere of influence as it rolls out the One-Road-One Belt Initiative, Beijing’s strategy of global dominance. “China has long expressed interest in Lebanon’s northern port of Tripoli as a link for its Belt and Road Initiative,” Hong Kong-based newspaper Asia Times reported last month.

Hezbollah in February joined an Iranian call for worldwide jihad against the United States following the killing of the wanted terror mastermind Qassem Soleimani. The Shia-Islamic terrorist group has been increasing its activities in Iraq, targeting U.S. diplomats and servicemen stationed in the country.

While beating on the drums of war for years by Lebanon’s Hezbollah has driven major foreign investors out of Lebanon, the group’s leader Hassan Nasrallah has called for turning to China to rescue the country’s failing economy.

This comes while Hezbollah has opposed taking loans from the International Monetary Fund to save Lebanon’s economy. (…)

The statement by Nasrallah was made as Hezbollah’s main financial and ideological sponsor, the Islamic Republic of Iran is striving to finalize a 25-year economic cooperation pact with China that translates into selling Iran’s cheap oil to Beijing and giving a strategic economic foothold to China, against Beijings economic and diplomatic support.

Lebanon will soon find itself in the same economic situation as Venezuela. The Lebanese currency has lost its value at least fourfold during recent months dragging most of the Lebanese middle class below the poverty line.

The Lebanon-based Hezbollah terror outfit has been receiving an estimated 700 million each year from the Islamic Republic of Iran. This funding was greatly disrupted after U.S. President Donald Trump pulled the plug on the Obama-era nuclear deal in May 2018, imposing stiff sanctions on Iran, the world’s biggest sponsor of terrorism.

With terrorist Hezbollah running Lebanon — controlling parts of the government and security forces — foreign companies have shied away from putting their money in the nation’s economy. In the wake of the current economic crisis and regional instability, outside investors are fleeing the country in droves, latest economic data shows. According to the DC-based Institute of International Finance (IIF), around $30 billion worth of capital fled the tiny Mediterranean nation between October 2019 and the April 2020.

China is promising cheap loans and lucrative investments to countries across the Middle East, Central Asia and Africa in order to promote its One-Belt-One-Road Initiative. Beijing wants to get its hands on highways, railroad and ports as its seeks global dominance. Last month, U.S. Secretary of State Mike Pompeo again warned developing countries to resist the lure of cheap Chinese money to avoid the debt trap. Poor countries defaulting on these loans are forced to transfer key infrastructure and ports into Chinese ownership.

Beside Iran, Pakistan is another country to sign a wide-ranging trade and military agreement with China. Both of these Islamic countries are widely regarded a leading exporters of jihad terrorism around the world.

Go ahead and let the Islamists get into debt with Chinese communists. LOL. It can’t do anything but turn bad for both of them.

I guess times are tough all over. China could use some broke countries like the USSR had…Cuba, Nicaragua, Angola and others.

How long before China starts harvesting Mullahs’ organs? I bet that China would ultimately crush Islam.

notamemberofanyorganizedpolicital in reply to JusticeDelivered. | July 19, 2020 at 3:38 pm

The Friendly Grizzly in reply to notamemberofanyorganizedpolicital. | July 19, 2020 at 4:52 pm

Are there sources of melamine in those places? One can’t name Chinese dog food without it.

JusticeDelivered in reply to notamemberofanyorganizedpolicital. | July 19, 2020 at 6:56 pm

Hog food, I bet that hogs are smarter than most Muslims.

When I was a teen, my best friend lived about a half mile away, his family raised hoglets for sale to finishing operations.

A sow had thirteen, so I brought one home to bottle feed. They are definitely as smart as a dog, and it was fun to play with. I was sad when I had to send it home.

I would definitely prefer company of a pig over a Muslim.

Cultures are not created equal ! !

notamemberofanyorganizedpolicital in reply to JusticeDelivered. | July 19, 2020 at 3:51 pm

The Communist Chinese will also get a lot of slaves, sex slaves, and children slaves too from those deluded Muslim countries.

WHO Thinks “Child Lifes Matter” Should Be PAINTED In The STREETS Of HOLLYWOOD??

One of the Uighurs should drop Nasrullah a line, let him know just how “friendly” Chairman Xi is.

The Ithna’ashariyya Shi’ite Nasrullah could probably care less about some random Sunnite who has fallen afoul of Nasrullah’s paymaster.

JusticeDelivered in reply to notamemberofanyorganizedpolicital. | July 19, 2020 at 7:04 pm

While I highly value children, I know that Blue Lives Matter MORE, and that children cannot thrive without police to keep the barbarians at bay.

Besides that, I know that barbarians will hate the assertion that Blue Lives Matter MORE.

Naw, those Muslims are even more impotent in death than they were in life. I hear that those virgins are very frustrated, an eternity with their itch never being relieved.

Maybe China can build them a day, or a high-rise.

It is looking like China has a bad combination of piss poor civil engineers and crooked contractors.

I have built several dams on my property. There is something called a core trench which serves to stop the damn from being pushed out by water pressure. The wave in that one dam should not have occured, and is an indication that they had no, or too small a core trench.

This is more like it: fascist regimes allied with one another against democracies.

Communist China was able to put on quite a front as a ‘normal’ world citizen, when it was in fact acting no different than Nazi Germany, though their tactics were sneakier: they bought off most of America’s media, companies, educational institutions, sports organizations and the like. Now that their true intent is out in the open, it’s back to Fascists, Incorporated.

Our job #1 now is to purge the US of traitors bought by the ChiComms, even within our own party.

Off with their heads.

China and Pakistan are allying because China has decided to make an enemy of India, which explains the tensions along their border. BUT India is not taking this laying down, and it may not turn out to have been a smart move on China’s part. India has already done what we should do – ban Tik Tok and all other Chinese software apps from being used inside it’s borders, as National Security risks.

I think China is going to learn that they picked the wrong side in the very old Muslim-Hindu fight.

To be fair, the Indians have never liked the chinese. And that is an understatement.

The real tragedy for India is that it took the wrong side in the Cold War. Wreaking its economy and inflicting poverty with socialist centralized planning.

Modi has taken some corrective steps. But lot needs to be done.

Banning Chinese communist party members from the USA is a good first step. Now we need to focus on the fact that China attacked us with a WMD, coronavirus! Nuclear weapons are not the best response, but at least we should stop importation of goods manufactured in China.

The obvious inference here is that US money—basically laundered through China—is going to go to Iran and its terrorism campaign. So I expect US trade with China will soon get squeezed hard by Washington.

That will make the electronic components, eyeglasses, and milling machine cutters I buy much more expensive, and may devastate the student musical instrument market, and maybe a few other things too. But it’s better than funding terrorism and Chinese expansionism.

Remember when Lebanon was a Christian country and the financial capital of the Middle East?

Proof that the Muslim jihadists are full of crap. China puts Muslims in camps, but, the Iranian mullahs clearly couldn’t give a damn about their Muslim brethren, as long as Chinese cash is filling their robes.

Other countries should follow China’s example when dealing with Muslims. They are just as big a long term threat to civilization as China.

Authored by Mike Shedlock via MishTalk,

China has long abused their muslim population but these scum will do anything for money and the muslims berate Jews endlessly when muclims in Israel have full rights and fair treatment.

First the news came out that Iran is snuggling up to the Chinese. Now one of their proxies is doing the same thing. It’ll be interesting to see what things look like in Southwest Asia in a couple of years.

TANSTAAFL, Lebanon. Enjoy your future. It won’t be your own.
.

The Red Chinese are not only imprisoning Muslim men, they are sterilizing their women to put a lid on the population growth of Islam within the borders. If they weren’t Muslims, there would be more outcry in the useless talking shops of the West.

China will be happy to fund Hezbollah. All they ask is you send them a list of all your blood types, and medical history. They even offer a free summer camp!