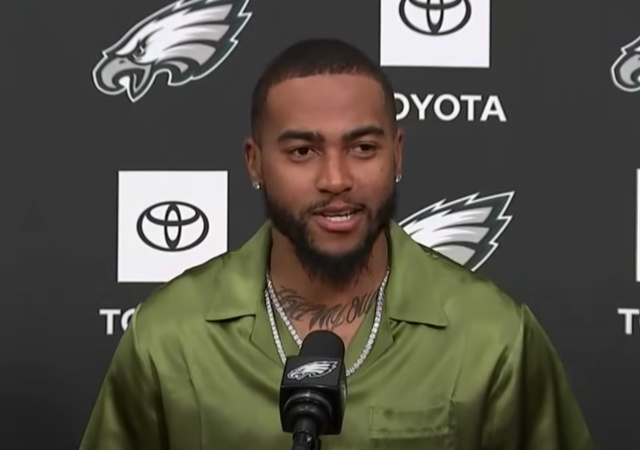 Philadelphia Eagles star DeSean Jackson found himself in quite a controversy after a slew of Instagram posts showed him promoting notorious anti-Semite Louis Farrakhan and posting a quote attributed to Adolf Hitler.

It began when he posted a picture on his Instagram, but deleted it. He reposted it this morning with a caption insisting he does not hate the Jewish community.

The Daily Caller said the quote comes from the book The Hidden Treasure That Lies in Plain Sight 4: The Day of the Lord and the End of America by Jeremy Shorter.

PhillyVoice.com said its research found the quote from Dennine Barnett’s book Jerusalem “as the font in Jackson’s post matches text in that book.” The website noted that “Barnett attributes the quote to a book by historian Robert Edwin Herzstein, ‘The Nazis World War II,’ published in July 1980.” 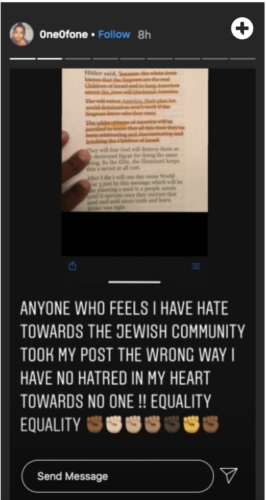 The highlighted portion of the page says (Hitler said is not highlighted):

Hitler said, “because the [sic] white Jews knows [sic] that the Negroes are the real children of Israel and to keep Americas [sic] secret the Jews will blackmail America.

The [sic] will extort America, their plan for world domination won’t work if the Negroes know who they were.

The white citizens of America will be terrified to know that all this they’ve been mistreating and discriminating and lynching the Children of Israel.

They will fear God will destroy them as he destroyed Egypt for doing the same thing. So the Elite, the Illuminati keeps this a secret at all cost.

After I die I will one day cause World War 3 just by this message which will be like planting a seed in a people minds until it sprouts once they nurture that seed and seek more truth and learn Hitler was right.

Then he posted a picture with an emphasis on one paragraph, but it doesn’t help much since we know the authors attributed the quote to Hitler and he was talking about the Jews. 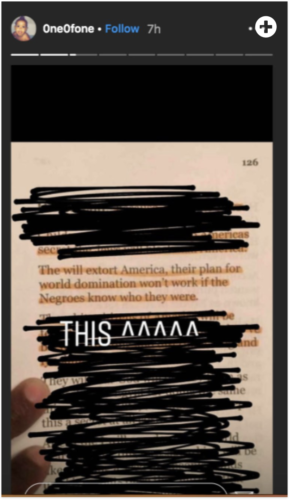 Jackson praised Farrakhan on Saturday and Monday. The post from Saturday is a screenshot of Farrakhan’s Independence Day speech. He slammed Bill Gates and Dr. Anthony Fauci for pushing a coronavirus vaccine, claiming the men want to “depopulate the earth.”

Farrakhan told his followers to “not take their medication.” In fact, he wants them to ignore “vaccines and medications developed by Western scientists.” 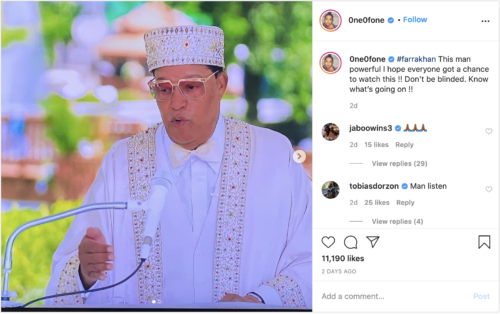 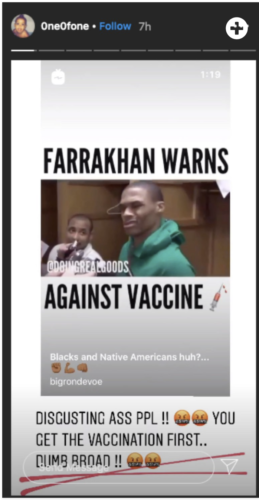 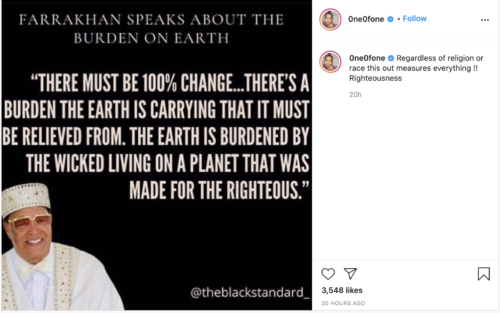 The Anti-Defamation League of Philadelphia demanded an apology from Jackson for promoting Farrakhan. I don’t think they mentioned the Hitler posts:

“Deeply troubling to see @DeSeanJackson10 promoting the message of notorious antisemite and NOI leader Louis Farrakhan. We have reached out to the @Eagles about this and call on Jackson to immediately apologize,” ADL Philadelphia said on social media. “We urge Mr. Jackson to use his platform as a professional athlete to promote unity and positivity, rather than the divisive words of a bigot.”

Jackson claimed people took his posts out of context:

“Anyone who feels I have hate towards the Jewish community took my post the wrong way,” he posted on his Instagram story along with the highlighted passage that was attributed to Hitler. “I have no hatred in my heart toward no one!! Equality. Equality.” At the end, he added raised fist emojis in multiple skin tones.

The Eagles released a statement:

Jackson is 100% protected from cancellation because of what he was born with. This is the essence of privilege.

Agree the Defamation League should have connected Farrakhan to Hitler’s comments.
Been a Eagles fan for decades but trying to decide if I’m not washing my hands of the NFL totally, not having to do with this only.

Personally, I am done with the NFL for quite some time. I watched football to relax, not receive Marxist Political Indoctrination Lessons.

Most jocks are kind of dumb, apparently not realizing that they are entertainers, and that we really do not much care about what they think, in that there is nothing profound in their thoughts.

So, when they stop being entertaining, we walk and their cash flow drops. They are killing the goose which lays the gold.

Another dumb jock, barely smart enough to realize that he is inferior.

Having dealt with some morons in a research setting, I found that they did not have any malicious traits. Those who are smart enough to recognize their inferiority, they have considerable trouble accepting it.

That is BLM’s problem.

What little intelligence they started with, is lost one blow at a time.

Personally, I think allowing pre adults to lose mental capacity in this manner is criminal.

Goodman and Schwerner shouldn’t have bothered.

The Hitler quote doesn’t sound remotely Hitlerian to me. Attribution is probably spurious. As Abraham Lincoln said, “90% of what you read on the Internet is hooey.”

However, the Farrakhan quote sounds genuine.

Where’s the NFL? Football in this country is dead as far as I’m concerned–they worry more about politics than whether players can move the ball.

A white man wrote something in 1987 and he is forced to resign. If a white priest comes out against BLM, he is suspended and sent to the hinterlands. but let a black entertainer or athlete, or even a white, liberal, woke TV or movie person say anything offensive, appear in blackface, or one said a joke about gays, women, AAs, or any other protected category and he skates.

Waiting to see the NFL — those of the forcing the Redskins to change their name and Kaepernick is a saint — will do anything.

How long will the NFL suspend this guy for. My bet is 4 games. /sarcoff.

Dude, when you promote someone’s words or actions you need to be prepared to defend that against attacks. Especially when the person you are quoting is controversial.

Maybe he didn’t get the memo? You know what memo and so do I. The memo every PDJT supporter has to live every day.

Nothing will happen to this guy. Hatred of Jews is acceptable if you have the right skin color, gender, political party, religion, etc.

Under a Biden administration the people pulling the puppet strings will advance a massive anti-Israel and anti-Jewish campaign. I believe this without a doubt in my mind. Orthodox, Conservative, and some percent of secular Jews see it coming. It will be an issue more divisive than the current race situation.

May this guy drop dead in a huddle.

I would rather see him checkout via lightning.

So in real life, this guy is clearly a complete ignoramus… in addition to being the little punk b*tch we already knew him to be.

For crying out loud, the man catches footballs for a living. Who cares what he says or thinks. Ignore him!!!

Let the left eat the left. Just like blm they’re nothing but a lie.

If hatred of Jews is a problem, why doesn’t the ADL condemn Islam? Their condemnations are a little too selective for my tastes.

Another dumb, black Jew-hater, gullibly swallowing the totalitarian hate of the ideology of “Submission.” What else is new?