“Joe Biden chose Kamala Harris to become his running mate for the 2020 election on Aug. 1, two weeks before the Democratic National Convention, after keeping his choice close to the chest for months.” 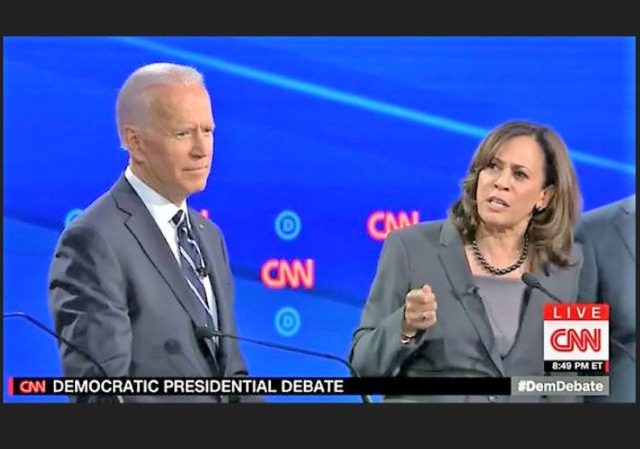 Joe Biden said today that he would announce his choice of running mate next week. Politico appears to have jumped the gun, explaining in an article why Biden chose Kamala Harris, a detail they quickly deleted and then updated.

Luckily, some people on Twitter caught the detail before it was changed.

Breck Dumas writes at The Blaze:

Politico made waves on social media Tuesday when they published — and promptly corrected — a biography of Sen. Kamala Harris (D-Calif.) claiming Democratic presidential nominee Joe Biden had chosen her as his running mate days from now “on Aug. 1.”

This is what it says:

Joe Biden chose Kamala Harris to become his running mate for the 2020 election on Aug. 1, two weeks before the Democratic National Convention, after keeping his choice close to the chest for months.

In his announcement, Biden called Harris ‘a worthy opponent and a worthy running mate,’ alluding to the pair’s rivalry during the earlier stages of the Democratic primary. She will bring her experience as a prosecutor, household name recognition, and skill as a debater to the ticket.

Kamala Harris’ identity as a prosecutor is well-known and, after the 2020 Democratic primary, well-litigated. After serving as deputy district attorney in Alameda County, Calif., in the ‘90s, Harris joined the San Francisco DA’s office in 1998 and won the top job herself five years later. She was then elected and reelected attorney general of California in 2010 and 2014, before jumping to the Senate in 2016. Now 55, she has earned a reputation in the Senate for her intense grilling of Trump administration officials and nominees. She is also the only Black woman currently serving on the body.

Harris and Biden squared off in the presidential primary, but Harris never actually made it to 2020, dropping out of the race at the end of 2019. She endorsed Biden in March and has been actively campaigning and fundraising for him since.

It’s entirely possible that Politico has a bio like this pre-written for every potential Biden VP and they accidentally used the one for Harris. Even so, it’s likely that Harris will get chosen.

"Joe Biden chose Kamala Harris to become his running mate for the 2020 election on Aug. 1, two weeks before the Democratic National Convention, after keeping his choice close to the chest for months."https://t.co/5NCJoaLSNM pic.twitter.com/HD3Fq9aM1S

As you may recall, Harris experienced a brief rise in the polls in the spring of 2019 after she went after Joe Biden during a debate:

It’s also worth noting that she said she believes Joe Biden’s accusers back in 2019 and that she owes her career to dating former San Francisco Mayor Willie Brown.

Joe’s already released a comment about his VP pick also.

“I mean, you got the first mainstream African-American who is articulate and bright and clean and a nice-looking Girl,” Biden said. “I mean, that’s a storybook, man.”

Connivin Caniff in reply to notamemberofanyorganizedpolicital. | July 28, 2020 at 10:23 pm

I don’t know about clean.

It would appear that Kamala Harris’s greatest qualification is that of Willie Brown’s willing willie warmer.

TheFineReport.com in reply to notamemberofanyorganizedpolicital. | July 28, 2020 at 11:41 pm

After that bad plastic surgery – yikes!

She’s now as ugly on the outside as she is on the inside.

.
Whoever is the one, it will be because she was chosen by “The One.”

She’s only getting chosen because she has, you know, the thing.

A Willie you mean?

No, he needs her to carry California.

She couldn’t carry California as a presidential candidate. How does picking this skank forward their cause? Is the Indian and Jamaican vote that important? Heels-up Harris is the laughing-stock of California politics.

On her back, she can carry California. That is, after a thick pair of beer goggles.

Hell! The dems could put in Biden’s dead grandmother as the VP pick and carry California!

Not that I want to give her credit, but as Pelosi said, a glass of water could be the VP candidate and carry CA.

But Harris is not that well liked, even in CA. She did poorly in the primary and I fail to see what she brings to the ticket to win other states.

You win the Internet for this week.

The Dems are going to be very disappointed in the black vote.

You are SO right.

Look at the article titles in this search

The difference between Hillary and a soggy ham sandwich is that Hillary will never be indicted.

They will keep each other occupied.

Does it say anywhere that she changed the law in order to go after the pro-life video guy?

That was not an error.

Interesting – if it turns out to be true. Of course, it could be a trial balloon to see how the brownshirts in the streets react.

At least, the swelling in her face appears to be lessening.

My pick is still Susan Rice. She will be loyal to Barack Obama.

Could be. If there is one thing I have learned, it is that the American media has reached Joseph Goebbels levels of lying and manipulation. It would be unwise to take what they say or do at face value.

I can’t think of a worse choice than Rice… So, have at it, Pervo Joe! Pick Susie!

If so, it would be karma… remember how Biden jumped the gun on Obama about gay marriage?

Easy answer: Politico has written up a gushing review for each possibility, piling on the praise and declaring that this is finally the decision that will sink Trump forever, et al…

This one just got accidentally released.

Yes, that is by far the most likely explanation, so Occam’s razor says it’s the correct one.

If Biden picks the one Democrat with a personality worse than Hillary’s, it will be a feat of epic proportion. Harris has a personality softer than sand paper. If true, Harris gives Biden nothing and I’d think even hurts him. I’d think he’d at least go for Florida with his choice.

Whoever Biden’s VP is they’re going to be seen as the real candidate that you’re voting for. Given today’s politics, it’s guaranteed they’ll be black, which the media will use to paint any and all critics as racist, and your failure to vote for them as racist.

She is descendant from Jamaican (slave owning) and Indian immigrants; not sure that qualifies her as “African American”.

Her black Jamaican ancestors, like those of pretty much all black Jamaicans, were slaves, not owners. If somewhere along the line there’s a slave-owner among her ancestors, that’s nothing unusual; most black Americans have some degree of DNA from their ancestors’ owners, for obvious reasons.

The point, though, being that Caribbean blacks are often quite unwilling to be categorized as any sort of African.

But I already know that I’m racist, because they tell me so every day. So, no pressure anymore, bro.

Where did they get the quote from the speech though? “Biden called Harris….”
Either the Biden campaign leaked his statements so the gush pieces could be prepared, or, they are just making thing up as usual.

Not seeing it will help the Democrat ticket, she went no where in her Presidential run and Leftifornia would vote for Chairman Mao if they could, so adding a state in their pocket already is pointless.

Check out the hideous plastic surgery job on this phony narcissist and power-hungry crone. Like something out of “The Picture of Dorian Grey,” except Harris’s physical and internal ugliness was accentuated by the surgeon’s scalpel.

I guess it’s an accidental-on-purpose leak to test public reaction. They haven’t decided yet.

There is a picture of Biden’s pick on the next thread:
“More comments sections bite the dust.”

Apparently Kamala learned a lot while working under Willie Brown in California.

Between this and the chimerical advance obituaries for Epstein, I feel like I’m living in an episode of Travelers.

“If CNN had their way, April 16, 2003 would have been one of the most tragic days in history. That day their website announced the deaths of, among others, Fidel Castro, Dick Cheney, Nelson Mandela, Bob Hope, Gerald Ford, Pope John Paul II, and Ronald Reagan. While the sheer number of people listed as having just died should have been a clue something was wrong, the incident is also a good example of why you should always read the actual article. While the headlines may have looked accurate, the information in them was decidedly not, since most of the obituaries were just templates that borrowed text from others, specifically the late Queen Mother. This resulted in Dick Cheney being memorialized as “the UK’s favorite grandmother.” –mentalfloss.com

So if Politico made an error, let’s see the obituary they have in hand for Dementia Joe. Or, show us the story you already wrote that he will stepping down so his VP can take over.

They’d be happy to show it to you, but it’s already been sealed in lead in the personal papers archive of Biden’s presidential library.

I thought he was going to chose Aunt Jemima; being both black and female.

If Sleepy Joe was a Republican, Saturday Night Live or one of the other lame late night shows would probably have a skit where Joe decides to have multiple VP’s in his cabinet – you know – kind of like a mocking of the Sister Wives polygamist family show, except run by a plagiarist. The VP cabinet would be made up of group of village people type women. Let’s see you have the police chief, the india with high cheek bones, the asian….