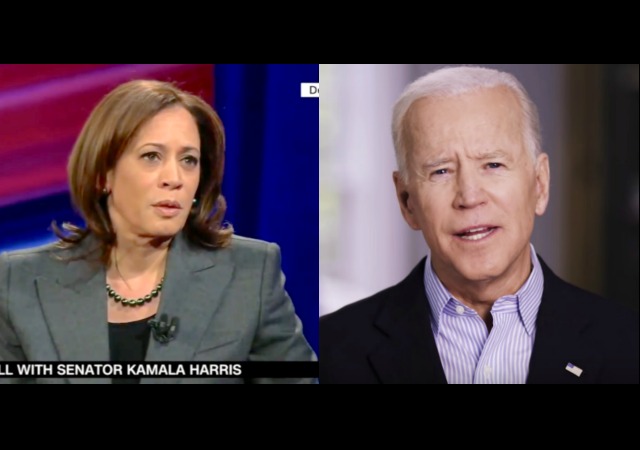 It’s safe to assume Senator Kamala Harris (D-CA) is on the shortlist of possible running mates for Joe Biden. Harris has made it clear that she supports Biden’s candidacy now that he is the presumptive nominee.

Back in 2019, however, she was saying something very different.

Harris appeared on Joy Reid’s MSNBC show this weekend and said that it’s important for Biden to have a woman of color on the ticket with him.

On Saturday morning’s edition of MSNBC’s AM Joy, Senator Harris appeared to be calling on the presumptive Democratic nominee to name a woman of color as his running mate, but hedged at the last second. Overall, though, Harris appeared confident that Biden is headed in that direction.

“Do you see Joe Biden turning to you or to another black woman as his vice president, and do you think it’s important to have that kind of representation, as you said, for Biden, for the party, to show up for black women the way that black women have shown up for him specifically, and for the party?” Reid asked…

Harris listed several issues involving health disparities and systemic racism, and said “I know Joe Biden cares about those issues, he and I have talked about those issues, that’s why I am supporting him for president. And I do believe that he is take seriously the importance of having an administration and having a government that represents the people, and reflects the experiences of the people, and looks like the people.”

“And does that mean having a woman of color, not just any woman, on the ticket?” Reid pointedly asked.

“I believe it is very important to have a woman of color, or a woman, as he has said, on the ticket, and I’m sure that that is what, you can take Joe Biden at his word,” Harris replied, then cracked “Unlike the current occupant of the White House.”

Just a year ago, Harris was asked if she believed women who had accused Biden and she did.

Democratic California Sen. Kamala Harris in April 2019 said she believes 2020 presidential candidate Joe Biden’s accusers, however, she has not addressed the new reports that have surfaced backing up the claims that Biden sexually assaulted a female staffer when he was a senator.

“I believe them and I respect them being able to tell their story and having the courage to do it,” Harris said at a presidential campaign event in Nevada. When asked if Biden should run for president, Harris said “He’s going to have to make that decision for himself. I wouldn’t tell him what to do.”

Sen. Kamala Harris (D-CA), who is now being considered as a VP pick for Joe Biden, said the following about Biden’s accusers last April: “I believe them and I respect them being able to tell their story and having the courage to do it”

Does she believe Tara Reade? pic.twitter.com/A1Asfx5kqB

Sen. Kamala Harris: “Joe Biden… knows how to speak truth even when it is difficult for us to hear.” pic.twitter.com/OFDqxkr2VO

Harris was for the me outing of Biden before she was against it. Rose McGowan must be proud of her support for her now.

What changed? She’s looking for a new job.

That is so cisnormative of Kamalatoe, she is excluding the other 639 genders.

They can all wait their turns.

Maybe she believes her but thinks it was a normal celebrity consensual relation, that is the lady had a part in it, so not wrong. If the lady changed her maind later, that doesn’t count.

I thought ole slow joe was a racist like Trump according to willie browns mistress.

the day of the week changed

Why is “belief” necessary when there is actual video documentation?

Not of the incident in question, of course, but many documenting pattern of behavior…

democrats are the most corrupt, morally bankrupt, dshonest, deceitful, two faced, unethical, hypocritical creatures to ever walk the face of the earth. kamala harris figuratively keel-hauled Judge Kavenaugh, but would let joe biden sniff her in his basement all day long to be his VP nominee. Sick.

She’s a sickening presence, but she’s just a symptom.

Take back our schools, or be happy with the likes of these people holding the highest offices in our nation.