NYC has so many problems, but I guess antagonizing Trump is more important. 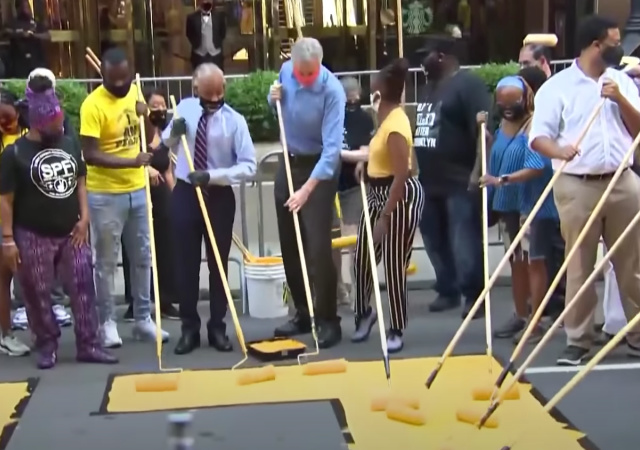 NYC is not in decent shape due to the shutdown and cuts to the NYPD budget.

So what does de Blasio prioritize?

Our city isn’t just painting the words on Fifth Avenue. We’re committed to the meaning of the message. #BlackLivesMatter pic.twitter.com/VE6MT80qDI

Watch this video. I don’t see much social distancing. I spot de Blasio without a mask! Didn’t the media and the left give President Donald Trump a hard time for not wearing a mask while he’s talking to a large group of people?

I guess it doesn’t matter when a leftist does it. He puts it on when he helps paint the mural.

De Blasio faced some jeers and boos while performing the publicity stunt.

After de Blasio announced the project, a source said “he is doing it to antagonize the president” and called him an “amateur politician.”

NYC will not have feasts, parades, or fairs until September 30:

“No, we don’t need big events anytime soon,” Mayor Bill de Blasio said on CNN. “We’ve had a lot of success making New York City healthier and we’ve got to stick to that plan.

“The kinds of gatherings we’re used to — the parades, the fairs — we just can’t have that while we’re focusing on health right now,” he added.

In a statement, de Blasio said:

“As New York has begun its reopening process, accessible open spaces are more important than ever,” said de Blasio in a statement. “While it pains me to call off some of the city’s beloved events, our focus now must be the prioritization of city space for public use and the continuation of social distancing.” The city will refund or defer fees connected with a denied permit.

De Blasio does this after his little spectacle in front of Trump Tower. Yes, the crowd painting the mural wasn’t as big as the events, but come on. No one social distanced. De Blasio didn’t even put on a mask until he started painting.

This man has no self-awareness and it seems to come out every single day.

No, he won’t be reelected, but only because he can’t be. His second term will expire on Jan-1-2022 and that will be it. His successor will likely be worse than him, hard as that is to imagine. (Cuomo can fire him now, but his replacement would be Jumaane Williams, or however that’s spelled.)

This seems a bit childish

It’s beyond childish – it’s monstrous.
Di Blasio is in league with the childish female white monsters who tore apart out country, and continue to plot to do so.

They’re gearing up and organizing for the next opportunity to riot. It’s not even a secret anymore.

It’s official now. White men have taken over BLM and are painting their graffiti.

It’s what democrats do.

Why can’t someone request equal space on the city streets for another “mural”? Since BLM is tied to that ACT Blue, isn’t this a type of election advertisement?

Yes,”black lives matter” isn’t just a slogan of protesters, it’s a political organization with a hierarchy and a fund-raising operation and a stated set of political goals — one of which is the destruction of the nuclear family.

Using taxpayer money to paint this organization’s name on a public street is viewpoint discrimination unless the city is planning on allowing every other political group that wants to to paint its name on public property too. And we know that is not going to happen. There should be multiple lawsuits over this bullshit, and deCommio should be a named defendant in all of them.

If the city were merely allowing an outside organization to do this then you’d have a good point. But if it was the city itself painting this message then it’s the city’s own speech, and it is not required to speak messages it doesn’t agree with.

Judicial Watch is suing DC for this same exact thing. Once the city allows a political slogan to be painted on the street then equal access should be granted.
https://www.judicialwatch.org/press-releases/sues-dc-paint/

Again, not if it’s the city itself speaking. Governments are allowed to have opinions and to express them, and do not have to say things they don’t like. But if the city merely allowed someone else to say these things using its property, then it can be argued that it created a limited public forum in which it can’t discriminate between viewpoints. (It can also be argued that it didn’t create any forum, but simply outsourced its own speech to a chosen spokesman, in which case it’s the same as if it did it itself.)

Women for America First has done so. The Gateway Pundit has an article about it.

We know that public monuments, statues etc can be damaged or destroyed without fear of being prosecuted.

Except for this one! If anyone tries to de-face the BLM street grafiti, they will be thrown in jail without bail and Epsteined before trial. And their families will have their lives destroyed.

And the main stream media will cheer this every step of the way.

Sadly, I believe that your comment is no exaggeration at all.

Who are we supposed to call to save us? The McConnell? McCarthy? The Ronmeny niece who is the head of the GOP? Slow-Walk Barr?

Those GOP clown are taking us off a cliff – happily: their gigs won’t be affected one bit if the left eats the rest of us.

All we have is PDJT and THE REST OF US. We have to stick together, and NOT trust the GOP AT ALL: they are in league against us.

Bet professionals could do it in 15 minutes

Wonder if there isn’t an existing NYC ordinance or NY State statute that prohibits graffiti on public spaces and properties? Wouldn’t that be rich if the Mayor was in violation of his own ordinance?

Who will arrest him? Who will file charges. Who will try him?

Deblasio uses BLM, tries to give Trump a giant middle finger at taxpayer expense and calls Trump an amateur…

Meanwhile, the MSM continues to cheer all the symbolic crap that will not improve the life of a single American, while vilifying the President and his work.

The proximate cause of progress in the black community was the “Great Society”, especially perpetual smoothing functions (e.g. welfare, redistributive change) that forces people to kneel, and is especially destructive to men who are conventionally tasked with protection and provision (e.g. externally negotiable and taxable income), and their standing in their woman’s eyes, too. Diversity (i.e. color judgments, denial of individual dignity, denial of individual conscience), including racism, sexism, and other class-based constructs where there isn’t a principled difference (e.g. sex), and exclusion exacerbates the problems at home, in the community, and in society.

Just thinking out loud here but, I wonder if they pulled a permit to paint the “mural” on public property and to block traffic while they did it. Would this constitute an in-kind donation to the opponents political campaign?

I wonder about the permit too. Or whether it was actually an official act by the city, which wouldn’t need a permit.

But no, there is no possible way it could be considered a donation to a campaign. Not even if it actually said “Elect Biden”. Not unless the Biden campaign asked for it. There seems to be a lot of confusion about this, and I don’t understand why, because it’s really very simple. By definition a donation is something that is given; that’s what the word means. A donation to someone, whether a person, a campaign or any other entity, must actually be given to that person or entity. Merely doing something that someone will like isn’t and can’t be a donation to him/her/it.

Someone should add “RARELY” to the end of this graffiti.

As I understand, a number of those “Defund The Police” banners and street paintings have had ‘De’ painted over by various hoodlums and wreckers, really nasty people who have no place in society and really deserve a proper punishment.

Which reminds me, I need to go buy more paint.

Some, select, Black Lives Matter is a mixture of the Pro-Choice, selective, opportunistic religion and diversity (e.g. racism, sexism) or class-based affirmative discrimination.

There was a popular bumper sticker in the 1960s reading:

The next time you need a cop, call a hippy.

Well those hippies have grown up to become America’s worst generation and who now control the country.

Some of us repented.

If the “finger in the wind” american public can’t see this naked partisanship using government resources then we are already doomed and civil war is coming. Our ability to reason, have intelligent, respectful conversations has been lost, democrats no longer care to cohabitate. We cannot allow them to use or freedoms to get us to vote for them when they WILL rid us of those freedoms

“I guess it doesn’t matter when a leftist does it.”

Actually, it does. He is a Marxist so he supports the leftists.

You will not know the enemy if you think that they think (or should think) like you, Comrade! de Blasio is a soldier in the Marxist insurrection.

He’s a Marxist and BLM is a Marxist organization. So, in effect, what he put on the street was “Marxism matters.”

He just had to get in that jab before he disallowed anyone else from gathering similarly.

There is no America without Black America

Is that a proposition they really want us to test? I don’t think they’d like the result.