Conservative Student Leaving Syracuse University Due to Harassment and Threats

Conservative Student Leaving Syracuse University Due to Harassment and Threats

“These occurrences happen daily on campus and online with no pushback from the administration.” 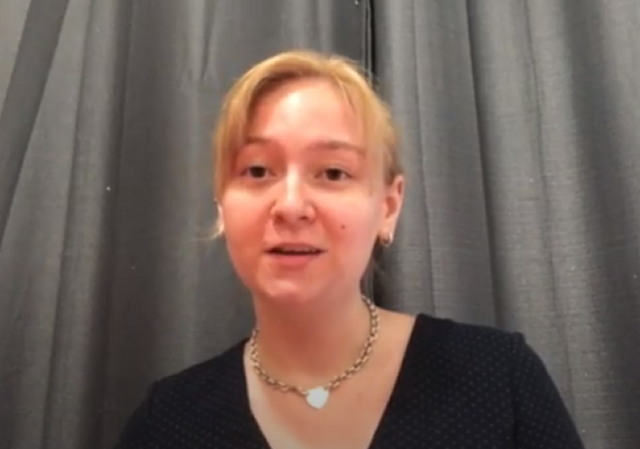 Adrianna San Marco is a conservative student journalist who has been attending Syracuse University. Back in June, she was fired by the school’s student newspaper for writing a piece that suggested institutional racism is a myth.

Since then, she has been targeted with threats of violence, even death threats, from fellow students. Her pleas to campus administrators have gone largely ignored, so she has decided not to return in the fall.

She shared a letter she sent to administrators which she claims has received no response:

I refuse to be silent anymore.

This letter was sent to the Chancellor of Syracuse University, Kent Syverud, as well as three other high level administrators on June 24th at 6:59PM.

To date, I have not received a response. pic.twitter.com/cec1s7KWIa

She also shared her announcement about not returning:

My time on Syracuse University’s campus has come to a close.

After continued silence from administrators and further degration to my safety I can no longer justify returning to campus this fall. pic.twitter.com/f92HM49TAC

San Marcos has also written a column detailing her experiences at The Federalist:

Indoctrination and exclusionary practices are not new to college campuses. They are, however, becoming increasingly normalized and dangerous. The effort to silence students who stray from leftist ideology has become detrimental to the physical safety and learning opportunities of conservative students.

During my freshman year at Syracuse University, I quickly became aware of the liberal bias that presented in every facet of student life. During lectures, professors would frequently demean conservative values and make tacky jokes about our president. Subsequently, students felt emboldened to push further by calling all supporters of President Trump fascists and openly harassing conservative peers.

These occurrences happen daily on campus and online with no pushback from the administration. As a conservative student, you quickly learn that your opinion is not welcome; silence will be necessary for your survival.

Conservative students have uncomfortably endured this explicit bias on campus for years. However, the time for silence on campus has passed, as now the status quo cannot continue without jeopardizing our wellbeing.

Shouldn’t he speak about the destruction of higher education occurring at his own alma mater?

Here’s an an example of the kind of hatred she is being subjected to on social media:

She appeared on the Drew Berquist podcast in June, to discuss the issue:

Syracuse University sounds like a dangerous place for conservatives:

Both students and my OWN professors have continuously targeted me for my Conservative beliefs and Zionist identity as a Jew, during my entire time at @syracuseu.

I’ve been identified online, cornered in person, chased down, grabbed, and now my life is being threatened: https://t.co/kzbmxol3V8 pic.twitter.com/4Y3vuQYx6C

Progressive students on college campuses sometimes argue for the removal of people they dislike, usually over politics, by saying that the person’s presence on campus makes them feel unsafe.

This case shows that it is conservative students who are often not safe on campus.

Silly girl. When you work for the ministry of propaganda you are not allowed to tell the truth.

She has a GREAT lawsuit against both the university and her harassers.

Will there be an investigation by campus law enforcement into the death threats? How about the FBI? Will the Department of Education look into discrimination at Syracuse? Will Congress cut off Federal funding to Syracuse until the clean up their act? Will ANYONE at ANY level be held accountable?

Or has this already vanished down the memory hole?

Trump will tweet, the DOJ will “investigate”, and once its usefulness as campaign fodder has expired, that will be as far as they go.

Has what vanished down the memory hole?

No Federal Agency will get involved but if one stupid note placed under the wiper of some Black Student (that later proved to be written by that student himself) was found, all the Wrath and Fury of the Federal Government would be unleashed!

She needs to carry.

Fuggetaboudit, no chance of getting a permit. She’s in NY.

They all need to carry, and to practice enough that they are able to hit the target.

Better yet, get the hell out of New York. All cities are cesspools to varying degree. Over time, there has been a clear trend of cities declining. Most no longer have a purpose, no or little economic purpose.

If she takes no steps other than leaving the university, then she’ll have done exactly what administrators hoped she would — namely, to go away — which will make them think their strategy of ignoring her “worked”.

I hope she now disabuses them of that thought by suing their frickin’ pants off.

Can anyone here post some links about the truth about Dr Fuchi? Google only praises him and orange man bad

For a friend I’m trying to convince, her daughter works at the FDA and says everyone loves and trusts him.. gag me with a spoon…

I used to work at the FDA and IMHO Fauci is a fucking clown.

Will American Marxists be charging the families for the cost of the bullets to the head all ‘racists’ will be getting?

It certainly seems like she has a case against the University. To hear the University tell it, it is a welcoming and loving place for everyone. Yet you don’t dare open your mouth that you are even slightly conservative, especially if you work there. Trust me, I know – personally.

The oh, so tolerant left who are the most bigoted and intolerant group of people you would ever meet. They are filled with hate.

I hope she takes them for millions.

She has a Title IX case at the very least…probably more.

As the “protests” following George Floyd’s death devolved into violence and the wanton destruction of American monuments, I had an epiphany. It was that this antiAmericanism was being fueled by the antiAmerican courses offered at colleges and universities in courses designed for marginal students who were incapable of competing in STEM courses. Most of these marginal students could only afford to enter universities through student loan programs guaranteed by the federal government. The obvious solution is to end the federal student loan programs. The alternative is to have colleges and universities finance student loans, that would not be guaranteed and would be dischargeable in bankruptcy court. Once the bankruptcies start putting colleges and universities in a financial bind, entrance requirements would most likely be tightened up to weed out the marginal students, and along with them the courses designed for them, with their attendant antiAmericanism.

That would break the back of university gouging students and their parents. And, it would put an end to most of the Affirmative horseshit.

I pulled one of my children from a college because the commons area, where students were supposed to be able to study, was full of loud, crude, obnoxious people who never studied. Their being at the college was just a big socialization event.

Dhimmi-crat totalitarianism, in all its myriad forms, is incredibly ugly. These twits are the new goose-stepping jackboots of the twenty-first century, along with their Muslim jihadist brethren.

Jews should be able to read the tea leaves. This is another rerun and the plot of this play should be already imprinted in our brains.

She should file suit and demand during Discovery that Syracuse produce the records of how she was accepted to Syracuse as opposed to the same records for all of her accusers, including how much tuition and other expenses they subsidized for them as opposed to her.

If a fair tribunal granted that discovery (based on discriminatory policies) Syracuse would pay for her education at a real University.

It seems to me that there’s an opportunity for someone to start a university – entirely online (for social distancing purposes) – that promises no politics, no woke shenanigans, and no tolerance for harassment of any kind.

Or there would be an opportunity if there was some chance that such a school could become accredited. Oh well. It was a nice fantasy.

Maybe not a fantasy – if your imagined school was staffed by professors who have been cancelled by the Leftists, be they from Evergreen or Cornell, and the gave value for the tuition, business would recognize it.

We need to think out of the box and adopt some of the tactics they are using to destroy us.

Maybe the answer is to promote growth of Hillsdale. That would require raising much more money.

Hillsdale is in Michigan, and I live in Michigan. I have come to believe that Michigan is doomed, in part because of a large, mostly unproductive black population, and in part because a large and rapidly growing Muslim population. The Muslim problem is a direct result of Henry Ford’s hatred of Jews. Between those two groups, and Marxist Democrats, I think Michigan is probably not salvageable.

One of my children is impaired, and likely to live about 50 more years. I need to locate the child in a place which will be stable for the balance of the child’s life, hence my wanting to leave Michigan.

Death threats from identifiable persons.
University refuses to take action.
Is a lawsuit in order?

Are other conservatives ready to sue, what the university needs are a bunch of expensive lawsuits. One lawsuit, they can take it in stride, many lawsuits would cause real pain.

With full refund, I hope.

Will anybody else even honor the credits she has?

My daughter and I toured Syracuse’s media school four years back. All they wanted to talk about was Hillary’s visit. They never mentioned the $250,000 price tag.

It seems to me, that FREE SPEECH, is only acceptable, if it is said by a LIBERAL !

I emailed the chancellor. Let you know if I hear back.

We’ve let the left have all of our schools for the past 60 years. It’s a little late to start complaining now.

It is not too late to start making them sorry.

Wait ’til inside higher ed hears about this. Somebody ought to tell them.

What else would you expect from Syracuse University? You’ll be better off somewhere else.

At Georgetown, we refer to Syracuse as Lower Canada Community College.