The child did not suffer any injuries. 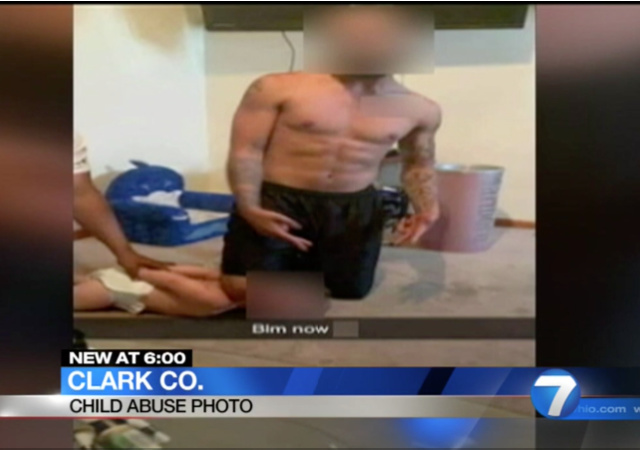 In Ohio, the Clark County Prosecutor’s Office has charges pending against Isaiah Jackson, 20, the man accused of kneeling on a child’s neck in a photo.

The sheriff’s office said a case against Jackson has been presented to the prosecutor’s office who will “provide a determination on the scope and breadth of the felony charges” that Jackson will face in the alleged incident, Clark County Sheriff’s Office Lt. Kristopher Shultz said in a media release. Investigators did not detail the charges Jackson might be charged with.

Deputies said an investigation was launched Tuesday after they were made aware of the photo, which shows a man with his knee on the back of a child’s neck. The child appears to be crying in the photo while a second person holds the child’s hands behind their back. The photo’s caption read “Blm now.”

Investigators made contact with the child, their mother, and Jackson. The child was transported to an area hospital for examination, however they did not suffer any injuries from the incident deputies said.

“Subsequent interview with the mother revealed that she was unaware of the photo having been taken, or its contents, until she had been informed by other parties,” Shultz said.

An investigation began as soon as the Clark County Sheriff’s Office received the photo two days ago.

The child’s grandmother found out about the photo on social media. It disgusted her, but it got worse when her daughter said the child is her grandchild:

“That little boy didn’t deserve none of that,” she told News Center 7′s Monica Castro on Wednesday night.

Sowers said the boy is with his dad, who took him to a hospital Tuesday to get checked out.

The boy is in good spirits, his grandmother said.

As for the male in the photo, who Sowers has learned is the new boyfriend of her son’s former girlfriend, she said: “I hope they all get what they deserve.”

Clark County Sheriff’s deputies have identified the man in the photo as 20-year-old Isaiah Jackson, who on Wednesday night remained in the Clark County Jail on a probation violation.

Earlier this week, Keriann C. Smith was “charged with felony child abuse for allegedly kneeling on her teenage son’s neck and asking the boy if he wanted to die like George Floyd” in Genoa City, WI.

She faces two charges: physical abuse of a child and strangulation/suffocation:

According to the complaint, Smith pinned her 14-year-old son to the floor and placed her knee on his throat, then invoked the name of George Floyd, a man whose May 25 death in similar circumstances with a Minneapolis police officer has stirred nationwide protests.

Smith allegedly asked her son: “Do you want to know how George Floyd died? He died something like this. Do you want to die just like him?”

She then allegedly told him: “Tell me you can’t breathe, tell me,” invoking a phrase uttered by Floyd — “I can’t breathe” — that has become a rallying cry for police brutality protesters in Wisconsin and elsewhere.

The teenager’s sister took a video of the alleged attack and gave it to the police.

I didn’t read anywhere else that the mother did the stunt too. Still, there’s something rotten in white women that flirt with BLM scum.

It’s clear for those who bother to follow the news that BLM, the organization, doesn’t care about anybody’s life. The slogan is fine, but the influx of money and “organizers” from the Democrat Party have turned it into terrorists.

It has more in common now with ANTIFA that any legitimate organization.

They are the same organization, Antifa, BLM, and the DNC.

Both Middle Eastern and Marxists are using blacks for their agenda, I have no sympathy for all three groups. They are all losers, depraved barbarians.

Did you ever read V.S. Naipaul’s _Suffrage of Elvira_? You might find it interesting (related to issues you raise).

Blacks routinely seek out lighter skin black women and often fat white women as mates. I have heard complaints from black women about a lack of suitable, as in employed, responsible,family oriented black males. And black ladies are quite perturbed when a decent black male marries a white woman.

All of this is quite funny when considered in the context of so called white racism.

If I were that mother, I would print out copies of that image…and stand outside the wherever these 2 idiots were and hand them out to passersby. And that would just be the start of what I would be doing.

Children and pets, the luck of the draw in rather they have a good life with a reasonable chance of achieving their potential. When they have a bad family, by the time they are removed, damage is usually severe and can only be partially mitigated.

If you were the mother, that pig wouldn’t be around to start with.

What a big man. Sorry about your d*ck, dude.

The guy appears to have a problem with arthritis in his hands. Seems to be a common problem with some young men. Maybe the CDC ought to be looking at that. /sarc

I want the mother charged for child endangerment–I understand she was in another room–why didn’t she go for help when she heard the child crying? And what about the special education teacher in Georgia, Brian Papin, who on his Facebook page told the criminal with his knee on the child’s neck that he wasn’t doing it properly, and he should put his weight into it if he was serious–I don’t often advocate for firing based on speech, but a teacher encouraging murder should never be around children again.

He should be fired even if he wasn’t serious.

A special education teacher in Georgia decided to give advice on Facebook to Isaiah Jackson on how best to kill the child.

It will be interesting to what happens (if anything) to the teacher.

Did the child have an adverse reaction to Fentanyl consumption? Was he Wuhan virus+? Did he engage in criminal behavior? Was he triggered by multiple stressors, perhaps a guilty conscience?

The caption said “BLM NOW MF”
Makes more sence that hes addressing an audiance and not demonstrating that BLM are similer to crying 2 year olds.

And, of course, there will be no hate crime charges. I wonder what would have happened if the races were reversed? No, just kidding, I’m not actually wondering about that. It’s obvious what would happen in that case given the selective application of hate crimes. Part of the pernicious consequences of the premise that only “whites’ can be racist. Give it a few years and they’ll charge the toddler with something.

Memo for Isaiah Jackson: Word gets around quickly in the can. You’d better grow eyes in the back of your nappy head because there’ll be white prison gang members who’ll just love to make your acquaintance.

I doubt this is the first nasty thing this man has done to that child. And yes, I blame the mother. She knows that man is a pig and she keeps him around.

Why aren’t they charging the person holding the child’s hands and the person who took the photograph? They are clearly accomplices.