Cannon Frustrated as Black Community Turns on Him, Calls Him a ‘Sell-Out for Apologizing’ for Anti-Semitism

Cannon Frustrated as Black Community Turns on Him, Calls Him a ‘Sell-Out for Apologizing’ for Anti-Semitism

Cannon sat down with a rabbi for his podcast. 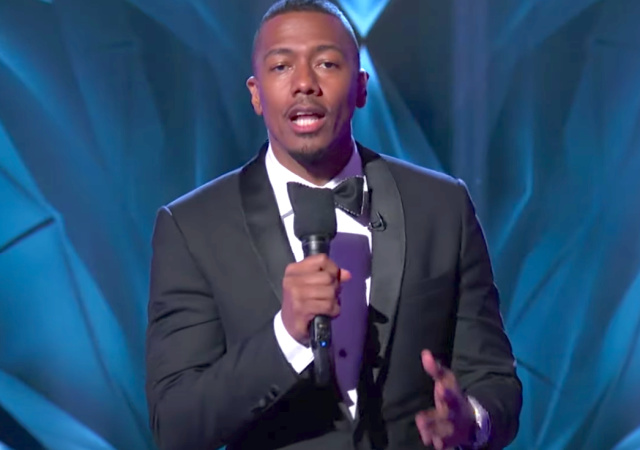 I blogged about Nick Cannon’s apology for his anti-Semitic comments. I noted that quite a few black people lashed out at him for the apology.

Cannon also noticed the backlash. I guess he now realizes you cannot please everyone.

You can read about his anti-Semitic comments in my post on July 15, which includes his desire to learn from his mistake.

The apology came out the next day, reiterating his determination to educate and connect with the Jewish community.

Cannon proved he meant everything he said in his apology because he posted a picture of him sitting with Cooper for an episode of his podcast.

The replies to his apology will not surprise you, unfortunately. It made me sick to read one person insisting the apology proves “that black celebrity is completely controlled by white supremacy.”

Others could not believe that Cannon apologized for speaking the truth. A few people thought the PR firms forced it out of him.

I hurt an entire community and it pained me to my core, I thought it couldn’t get any worse. Then I watched my own community turn on me and call me a sell-out for apologizing. Goodnight. Enjoy Earth???

Y’all can have this planet. I’m out!

Cooper came out with nothing but praise for Cannon, saying the TV host “appears to be someone who’s genuine in his desire to make sure people understand his apology.” It wasn’t just an apology, but something that will actually bring people together.

Cannon is not in a good place. His friend Ryan Bowers committed suicide, which led to Cannon admit he barely rose “from my own dark contemplation of continuing my physical existence on this planet.”

To the ghosts of Goodman and Schwerner: Gentlemen, you wasted your time.

Apologizing to and appeasing the angry Regressive mob is like feeding a hungry alligator, hoping it will eat you last.

There is nothing “progressive” about the modern-day, rabid Left. They’re taking us backwards in every category of human development.

He didn’t apologize to the mob. He apologized for having been in the mob. Now the mob is angry at him for that apology.

Just another data point confirming how the BLM, Antifa, and others in the cancel population are nothing more than repackaged racist ideologues pushing hard for anarchy or socialism. While they have clearly become what they damn, the larger question is why so many remain (purposely?) ignorant of this obvious situation and why so many, especially in the MSM, continue to double down in their support for it? We must have all become extremely well educated social experts in order to believe in and support something so contrary to what America used to stand for.

These groups consistently tell the world that they are morally corrupt and evil. Truth, honesty, decency, etc. scares the crap out of evil beings. Many good people do not recognize evil for what it is. And, they fear the application of Alinsky’s evil rules. For this evil to flourish, it must be tolerated and supported by business and political leaders who are true enemies of a free people. They are the true enemies because they have the power to crush this evil revolution yet they support it.

“BLM, Antifa, and others in the cancel population”

Don’t leave out the greatest canceller of them all, Islam.

Anything, everything, and everyone considered “unIslamic” is to be destroyed, as coming from the Jahiliyyah, the period of ignorance before Islam’s arrival.

First, don’t think of Antifa as “anti-fascists”
Rather think of them as ANTI Freedom Anarchists

To hurt someone such that they doubt the reason they were put on this Earth is something very sick.

But to do so after someone has sought to make amends with a community they hurt with their words and bring about healing, that is beyond the pail.

We rebuilt Japan and Europe on the premise that healing was better than revenge. That has built a legacy of peace and security. But, of course, the regressive left doesn’t understand that. They only want to destroy and pillage.

The only reason that we had the opportunity to rebuild Germany and Japan was that we had defeated them utterly, burned down their cities, and killed millions of their citizens. The survivors knew we could do the same to the rest of them if they didn’t accept what had happened and surrender totally.

Which is what happens in War, ot is what we should have done in Korea and Vietnam … we wouldn’t be dealing with this rif raf today and many of the problems we have including “political” globalist traitor Generals

Diversity dogma takes a back seat to character. Fortunately, racism is progressive (i.e. [unqualified] monotonic process), and most people are not diversitists.

Cannon’s biggest problem is the delusion that he matters. Had he taken his earnings from being a Nickelodeon has-been and settled down into a nice boring career selling real estate or media producing or something none of this would have happened.

I find most apologies to be phony, as they only come after backlash. The people aren’t really sorry, other than the reaction being not what they wanted.

These days it seems no matter what you do or say you are wrong if the Marxists say so. They took 1984 and made it a reality. Nothing is real. This is like dealing with Hitler or Stalin or Mao, moving demands and goalposts, with the intent that nothing you do or say is acceptable.

These Marxists need to be declared terrorists and insurrectionists and dealt with accordingly.

Antifa and BLM are not looking to do anything for this country other than to destroy it at its core and make it some Marxist utopia… for them… so they think.

They have already done so much damage!

the left keeps calling out republicans and religious people to stop the “hate”, but it is the left that practice it and preach hate.

Never heard of this guy before his racist ramble, will probably forget about him after the kerfuffle dies down.

He is also the former Mr. Mariah Carey. He has three kids and his oldest two (9-year-old twins) were from the marriage with her.

A substantial segment of the black and black Muslim communities comprise the biggest group of Jew-haters that you’ll ever see, outside of the Arab Muslim community. But, of course, blacks are reliable lemming Dhimmi-crat voters; hence why their Jew-hating standard-bearers, e.g., Sharpton, Farrakhan, Keith “Hakim” Ellison receive carte blanche to spread their Jew-hate everywhere, without receiving any negative repercussions, or, receiving a scintilla of criticism from the Party leadership.

In the current era of Israeli (arguably representatively Jewish by proximity)-Arab-Muslim fence-mending, Farsi-speaking Iran, along with all its Middle-Eastern terrorist-clients, eg, Hezbollah, et al, might be the new and upcoming, if not already leading Jew-ridding-ophobic-icidal demographic entity.

(Hate is so abused, even worn-out these days because of its psychologically complex usage, etc.)

Joshua: A strange game. The only winning move is not to play. How about a nice game of chess?

It’s not uncommon in the American black community to believe that the Jews ran the entire trans-Atlantic slave trade. A lot of white supremacists believe it too. It’s why David Duke and Louis Farrakhan attend the same anti-semitic events in Iran. The difference is, David Duke is rightly condemned as hateful and ostracized from mainstream society, while Farrakhan is lionized in the mainstream press and got to sit near ex-presidents at Aretha Franklin’s funeral.

I completely get his frustration. I’ve been complaining for years now about the creapiness of our self-imposed cellphone echo chamber isolation”. There are people I have known as friends, really good people who are educated, intelligent (there is a difference), caring, generous and kind but should I inadvertently use a trigger word, they will snap into an ugly monster of hatred. These are people, all liberals, who divorced, estranged their families and ended friendships over politics.

I can’t deal with it. It’s like talking to someone you know and during a normal conversation, will go bat-shit crazy over something nutty like alien abductions or the earth really being flat. I really don’t know people these days. The world has gone mad.

I miss the old days, when I knew two gay couples, both of which were longterm partnerships, each having a conservative (mostly fiscally) Republican as one member of the respective couple and a liberal Democrat as the other member.

Anyway, I don’t think partnerships like that exist much anymore.

Look, Cannon is either an anti-Semitic bigot or a stupid fool who was pandering to Black sentiment. Now, he appears to be pandering to Jewish interests and the Blacks do not like it. Unintended consequences raise their ugly head once again. Too bad, so sad.

Or he’s a good person who was genuinely ignorant, and in his ignorance said some very bad things, and has now realized his error and wants to educate himself.

It doesn’t matter whether he’s sincere or insincere. Apologies are bleeding sores, and blood attracts predators. Never, never, never, never apologize to anyone except individual family members and friends. There is absolutely no upside to it.

According to Blind Gossip, Cannon only apologized to avoid losing work.

Welcome aboard the USS Youcantwin, Nick.

My experience is that many blacks are anti-semitic without any knowledge or experience with Jews. They imbibed their hatred of Jews with their mother’s milk. (Inside joke.)

For some black entertainer (who I’d never heard of before) to come up with anti-semitic comments does not surprise me.

Was Cannon’s apology sincere? I doubt it, but I am willing to give him the benefit of the doubt. He probably came by his hatred of Jews honestly, and he might be honest when he claims a desire to learn.

(Of course, any Black who protests he is not anti-Semitic is “fragile” and unwoke, and is most in need of this training.)

What is Cannon apologizing for, exactly? Being a Jew-hater or being an idiot who repeated some of the dumbest theories ever created?

He’s still got his hate-whitey cred going. He never made any fake apology for those remarks. That must be worth something with the broader black community.

You can read about his anti-Semitic comments in my post on July 15, which includes his desire to learn from his mistake.
————————
It wasn’t a mistake. He meant every word of it.