California’s coronavirus situation may have just turned deadlier, but for reasons not having anything to do with the pathogen. 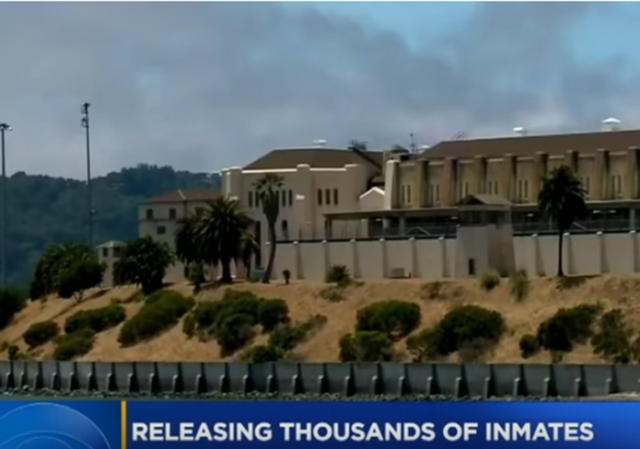 Great news for California! There are now plans to release 8,000 California prisoners ahead of schedule in an unprecedented attempt to stop the spread of COVID-19 inside state prisons.

The announcement on Friday by top advisors to Gov. Gavin Newsom offered stark evidence of the dire health conditions at several California prisons. The total number of prisoners at facilities for men and women has already been reduced by thousands since Newsom declared a statewide emergency in response to the coronavirus.

More than 2,300 prisoners have tested positive for the coronavirus, state officials said. Significant increases have been reported at the California Institution for Men in Chino and at San Quentin State Prison in Marin County. At least 31 prisoners have died from COVID-19 related illnesses.

The decision to expedite the release of prisoners comes on the heels of a growing chorus of complaints by state lawmakers, prisoner advocates and a federal judge that the state hasn’t done enough to stem the rising tide of infection.

Just how this is suppose to help California, I am not sure. The prison population tends to be on the younger side, and the virus hits the elderly the hardest. Coupled with better nutrition, regular exercise regimens, and the availability of medical resources, many of the incarcerated are less likely to suffer adverse effects even if they do contract COVID-19.

Perhaps this would be less of an issue if it weren’t for the fact that cities within the state weren’t also racing to embrace “Defund the Police.”

The Los Angeles City Council voted Wednesday to cut hiring at the Police Department, pushing the number of sworn officers well below 10,000 and abandoning a budget priority once seen as untouchable by city leaders.

Faced with a grim budget outlook and deluged by demands for reductions in police spending, the council voted 12 to 2 to take the Los Angeles Police Department down to 9,757 officers by next summer — a level of staffing not seen in the city since 2008.

Overall, the council’s decision delivered a $150-million hit to the LAPD budget, much of it coming from funds earmarked for police overtime pay. Councilman Curren Price, who pushed for the cuts, said two-thirds of the savings would ultimately be funneled into services for Black, Latino and disenfranchised communities, such as hiring programs and summer youth jobs.

“This is a step forward, supporting minority communities in ways in which they deserve — with respect, dignity and an even playing field,” said Price, the only Black member on the council’s budget committee.

I am not so sure those minority communities actually deserve the influx of prisoners over the next few weeks. However, maybe the “community-based responders” will work out for them.

The Los Angeles City Council on Tuesday unanimously approved a measure to develop an unarmed model of crisis response that would replace police officers with community-based responders for nonviolent calls.

“This is the dawn of a new era of public safety in Los Angeles,” City Councilmember Herb Wesson Jr. tweeted Tuesday.

Twelve years ago, another California city did “defund the police,” with devastating consequences.

Twelve years ago, officials in Vallejo, Calif., reluctantly took a step that activists are now urging in cities across the country: They defunded their police department.

Unable to pay its bills after the 2008 financial crisis, Vallejo filed for bankruptcy and cut its police force nearly in half — to fewer than 80 officers, from a pre-recession high of more than 150. At the time, the working-class city of 122,000 north of San Francisco struggled with high rates of violent crime and simmering mistrust of its police department. It didn’t seem like things could get much worse.

And then they did. Far from ushering in a new era of harmony between police and the people they are sworn to protect, the budget cuts worsened tensions between the department and the community and were followed by a dramatic surge in officers’ use of deadly force. Since 2009 the police have killed 20 people, an extraordinarily high number for such a small city. In 2012 alone, officers fatally shot six suspects. Nearly a third of the city’s homicides that year were committed by law enforcement.

The Golden State is about to have a spike in crime to match its spike in COVID!

California’s coronavirus situation may have just turned deadlier, but for reasons not having anything to do with the pathogen.

If masks work so great for us in grocery stores, why don’t they just make all the prisoners wear masks?

Because prisoners have rights.

It’s okay. CA has strict gun control, so I am quite sure the honest as the day is long convicted of breaking the law prisoners being released won’t be able to buy them legally to use against the unarmed citizens of CA.

Of course, I can say that because I now live in TX and not in CA where I was born.

Even better they should make the prisoners wear plastic bags over their heads.

Or let that catching diseases just be part of being in prison. If people are unhappy about this then they shouldn’t commit crimes.

Thousands of would-be Willie Horton’s running around in the months leading up to the election. Will the R’s have the balls to leverage this and all the BLM nonsense?

Of course all of them will be “non-violent” criminals, right? Sure, Jan.

California, already going to hell in a hand cart, has now officially arrived.

I think they’re sending the violent criminals to nursing homes.

Wait till Cuomo hears that. “What a brilliant idea!”

Not that long ago the rulers of California released 42,000 prisoners in order to save money.

Do you in gated communities feel like you safe??

Here we have the most controlled environment one can have to assure “social distancing” and tracking. We also have a population that is a pox on society.

What is the driving impetus for the Left freeing criminals at every opportunity? Professional courtesy?

Oops- my bad. Fat-finger syndrome aggravated by that extra glass of wine.

A BIG additional thumbs UP from me, Bob. ?

Putting ordinary people at the mercy of criminals is part of the communist playbook. solzhenitsyn talks about this in the Gulag Archipellago. Keeps people on their back foot, so easier to manage ad intimidate, as ordinary people are no match for the viciousness of hardened criminals.

Hard to believe some people (other than the communists) are stupid enough to actually *want* that. Especially women. Let us fervently hope the silent majority will rise up to smite in November.

In case you haven’t heard this before, California:

Those nominally “in charge” truly don’t care at all about your safety.

Regardless of political viewpoint, how is it possible for any conscious person not to see what’s going on?

Seriously, this is insane. It is intolerable. No one could possibly believe that any of it is legitimate. The officials who enable it must be removed, from Gavin Newsom to Emmett Sullivan. The people who organize and support this campaign of destruction must be brought to justice.

Just like Trump has taken a hit from the pandemic, so have certain states and cities. The dynamics with Trump are much different and there is much unknown. However, it will be interesting to see in places like California and LA, and NY, etc. if Democrats lose support among voters, who are ready for a new paradigm.

I missed the part about the regular death rate. Oh. And why would prisoners with anti-bodies or active cases be released?

All part of the leftist plan to create chaos – which they left will offer to ‘cure’.

More innocent people will suffer and die from the release of 8,000 hard-core cons than the virus.

So staying home is good, locking down is bad.
Got it, glad I’m not in Leftifornia.

No matter criminal aspects, releasing 9000 people who have demonstrated poor judgment cannot be a good idea.

Leslie, I can’t imagine the state of CA would ever admit as much, but could the real driving factor behind early release over Covid fears, be limiting liability for the state?

Since masking up, social distancing and 14-day quarantines are the official gov’t precautions for Covid, keeping prisoners in over-crowded conditions would seem to implicate the state in willfully contributing to the spread of the virus. So they do their best guess to identify and release the least dangerous of prisoners thereby giving them some breathing room within the prison to comply with their own rules AND letting them off the hook for any prisoners who contract Covid after release.

Cynical me thinks it’s more about limiting liability than humanitarianism … the move is certainly not humanitarian as far as the law-abiding public is concerned.

Why can’t viruses be one of the consequences of prison? No need to free any criminals from prison.

Covid has been over for a month. The death rates are normal. Here is a link from the CDC.
https://www.cdc.gov/nchs/nvss/vsrr/covid19/excess_deaths.htm

Thanks for the link.

Beginning the week of February 8th, they began annotating the numbers on the chart with this note:

“Data in recent weeks are incomplete. Only 60% of death records are submitted to NCHS within 10 days of the date of death, and completeness varies by jurisdiction.”

Why the annotation just when Covid was starting? To discredit anyone who would use the data to question CDCs, et al, continued fear mongering?

What of the corrections officers who are inside the prisons guarding the inmates? Has their death rate increased? Are they to be released? How will they be protected?

“At least 31 prisoners have died from COVID-19 related illnesses.”

The “relation” is that they had Covid when they got shanked by rival inmates.

“At least 31 prisoners have died from COVID-19 related illnesses.”

The “relation” is that they had Covid when they got shanked by rival inmates.