There is nothing new under the sun, except for maybe this weird hyper-environmentalist song about reducing cow farts 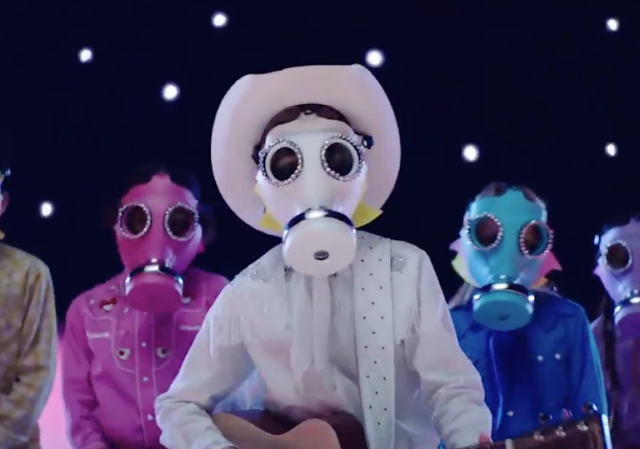 There is nothing new under the sun, except for maybe this weird hyper-environmentalist song about reducing cow farts, purposely created and filmed as part of a sustainability ad campaign for Burger King.

Tuesday, Burger King released an online ad to promote their latest sustainability initiative — feeding cows lemongrass to help reduce cow burps and farts which produce methane gas which we’re told is responsible for global warming or climate change, or whatever we’re calling it these days.

The ad could be some next level 4D parody for all I know because it literally checks every possible climate change propaganda box possible: melting ice, a Low Carbon Land county fair (bet that’s a load of fun), kids singing about the climate, buzzwords aplenty, Burger King jumping on the guilt bandwagon by concluding with a perfectly woke slogan, “Since we’re part of the problem, we are working to be part of the solution.” I’m just surprised there was no recompense from the child cowboys for the illegal acquisition of native lands, because that’s all that’s missing from this strange video.

without a doubt the best cow fart news you will hear today. #CowsMenu https://t.co/kPCXpjfbGL pic.twitter.com/HzU41v1Kya

The comments were the disaster you would expect:

Anyone that doesn't get this is in #ClimateDenial. These youth are speaking to THEIR peers for THEIR future. Don't look at it, LISTEN TO IT FFS!

But I think this pirate man really nailed it:

Please illuminate the mystery. Is the intent to get people to *want* to go to Booger King for lunch? Inquiring minds want to know.
.

I love the commercial where they bleat on about keeping you “safe” with distant tables, no contact, obsessive cleaning and all the hand sanitizer you can drink, but not ONE SINGLE mention about keeping you safe from the garbage they serve and have the gall to call “food”.

Haven’t eaten at a King for probably 30 years.

The nation has truly gone insane. I am not saying this as a cliché, or as a superlative, but rather as an objective statement of the current American existence.

notamemberofanyorganizedpolicital in reply to DSHornet. | July 15, 2020 at 6:51 am

You think you know what you are eating but it’s not…..

We are saved! The world will not end before I enjoy my retirement.

Yet how many people, in order to get to the closest BK, get into their cars to do so? And sit idling in drive-thrus, especially these days?

As if herds of Columbian mammoth and giant bison didn’t pass gas back in those Pleistocene days!

I could hardly understand a word they were singing. Also put off by the Baby Martin guitar … though the kid would probably fall over on his face if it had been an LP …

When I first saw this, I thought “Babylon Bee?” but no, this is, apparently, reality…

Sounds like Burger King is due for a Nobel Peace Prize.

If it was my company I would fire everyone in the marketing department, at least everyone involved in this monstrosity.

They even made a “behind the scenes” video !!!

Shouldn’t the kid be wearing a brown suit since he emerged from the south-side of a north-bound cow?

The world has gone insane.

Who has gone insane is anyonw doing nothing against the loons.
And these loons have been carefully grown.

What, did they give up on pushing their Impossible Burger?

I thought they were offering fake meat burgers because of the fake climate crisis.

What marvelous news that Burger King is putting their cows in reeducation camps to prevent an “it could happen” risk to the global population in the next 50 years. Now, what are they doing to reduce the reportedly massive amounts of Roundup being found in their veggie burgers, that will kill their own clients within the next decade?

There is no reason to suppose that Roundup is harmful to humans.

Course not Milhouse. Round up is for cattle not humans. Move ’em on, head ’em up . Rawhide!

What I smell isn’t of bovine origin. Instead, it’s the smell of desperation. Well earned desperation.
.

I read somewhere that some people tried reducing the methane from cows. The intestinal bacteria of kangaroos doesn’t produce the methane that bovine plop peoduces. So an eco-friendly organic farm in California tried transplanting that bacteria into their cows. They used their cow plop to fertilize their veggie garden. After awhile everybody at the organic farm started elongating their vowels, Aussie style.

News Flash! Burger King in business relationship with Midas Muffler! Flatulent bovines will be equipped with catalytic converters! Film at 11!

Black Lives Matter started a riot at an otherwise peaceful restaurant in Dallas by attacking customers and staff. This is what Cultural Marxism looks like.

Be prepared to see more of this goofy shit as millennial college graduates move up corporate ladders.

Where is the science on how removing the farts from the process affects the quality of the meat.

BK gets into the Thai burger business.