“It says something when you’re at a Black Lives Matter protest, you have more minorities on the police side than you have in a violent crowd and you have white people screaming at black officers” 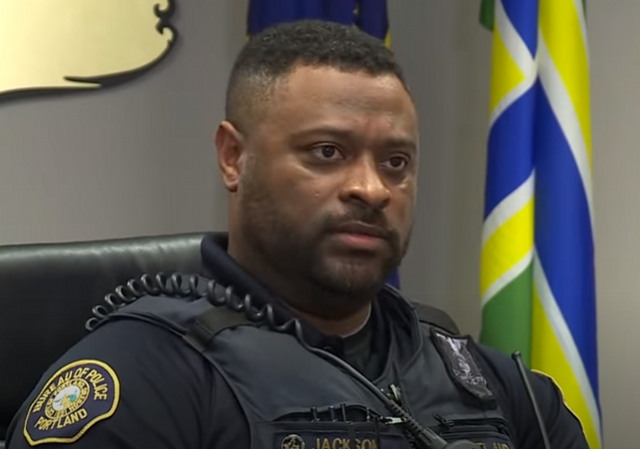 Jakhary Jackson is a police officer in Portland, Oregon. During a recent interview, he noted that in his encounters with Black Lives Matter protesters, the police are more diverse than the mob.

He also claims that he and other officers of color have been subjected to racial slurs by protesters.

The comments from Jackson appeared on a recorded interview that was released by the Portland Police Department on Wednesday.

“It says something when you’re at a Black Lives Matter protest, you have more minorities on the police side than you have in a violent crowd and you have white people screaming at black officers: ‘You have the biggest nose I’ve ever seen,” Jackson said…

“They don’t even know that the tactics they’re using, are the same tactics that were used against my people,” Jackson said.

He recounted multiple instances where minorities at rallies would want to have a conversation with him, but a white protester would intervene, saying: “F— the police. Don’t talk to him.”

“Every time I try to have a conversation with someone that looks like me, someone white comes up and tell them not to talk,” Jackson said.

Joshua Rhett Miller of the New York Post has more:

Black cops in Portland are being subjected to vile racist taunts from white Black Lives Matter demonstrators, one of the officers said in a new interview.

Officer Jakhary Jackson, a member of Portland police’s rapid response team that has responded to ongoing protests for nearly 50 straight days, said what he’s seen has been downright “frightening” as he detailed some of the encounters during a July 9 police briefing…

“It’s been very eye-opening,” Jackson said during the briefing, adding that he’s witnessed more minorities among his counterparts than within the crowds of “violent” protesters.

Jackson said he’s also been told by “privileged white” protesters to quit his job and that he’s hurting his community more than helping it.

Based Portland police officer calls out hypocrisy of Antifa

If you prefer to watch the entire briefing, it’s below:

The most racist people in America are leftists aka progressives.

They are condescending towards minorities.

Of course. The leftist progressives believe that they are superior to blacks, that blacks can’t make it without the benevolence of “liberals,” and giving them free $#!+ is how they keep them on the progressive plantation. It’s the “massa/slave” relationship retooled for the 20th/21st century. It’s how you get “them n*****s” voting D for the next hundred years.

notamemberofanyorganizedpolicital in reply to nordic_prince. | July 18, 2020 at 1:42 pm

White Liberals are racists. I welcome everyone over to the conservative side. We respect the individual. I think that black Asians native Americans are very bit as capable as Puerto Rican’s… and whites. Just playing with y’all. I really believe everyone is equal. Love to all.

I have a different take on this. I think that all should be welcome, and I think that those looking for handouts will not want to part of a group which expects personal accountability.

I have seen quite a few people who are highly motivated, who are industrious, who have drive and gumption, who otherwise are of average intelligence, build successful businesses. And I think that those people would be attracted.

I have known geniuses who had no gumption, no entrepreneurial inclination. They were not good for much, in large part because they could not apply their intelligence in a productive way.

Intelligence, as it applies to your example, is relative. I’d say the “average intelligence” people you mentioned displayed greater intelligence than your so-called “geniuses” using your own observations that the former actually accomplished something worthwhile, whereas the latter did not.

The taxonomic basis of diversity dogma (e.g. racism) is “color” that is only correlated with skin color.

I’d like a few minutes in private with some of these protester’s parents. Losers.

Woke anarchists cannot be racist according to their revolutionary dialectic. I pity good people who are stuck in the dystopia that is Portland. I fervently hope the scelestic aberration that is Portland does not further metastasize.

Their is always Seattle, Chicago and New York.

These people’s beliefs sound a great deal like Muslims. With Christians religion suggests living a good life, granted many people do not. With Islam, it teaches deceit, dishonesty, brutality.

notamemberofanyorganizedpolicital in reply to JusticeDelivered. | July 19, 2020 at 12:06 am

James Woods
@
Coincidentally yet another Catholic cathedral is destroyed. Another that stood unharmed for centuries

With minimal food, water and shelter, to make and keep them feral

The gap between BLM and the KKK continues to narrow….

notamemberofanyorganizedpolicital in reply to Recovering Lutheran. | July 18, 2020 at 1:45 pm

BLM is the KKK.

That’s just like there still a mafia in this country.

It’s just that the mafia took over the Democrat Party.

I think that BLM has become worse than the KKK. I also think that BLM will trigger a resurgence of the KKK and similar groups. Even worse, is that BLM is alienating people which blacks need, in order to continue all those special perks.

I agree that BLM is worse than the KKK, mainly because (1) it has billions of dollars in hate cash from huge corporations, something the KKK could only dream about, (2) it has widespread support in academia, entertainment, media, and politicians (much more than the KKK ever had, even at the height of its popularity), (3) law enforcement and the military are mostly paralyzed or (I suspect in places like New York City and Portland) in league with BLM, and (4) most importantly BLM is much better armed than the KKK ever was. In terms of being dangerous BLM belongs it in the same league with the Khmer Rouge and ISIS.

you have white people screaming at black officers: ‘You have the biggest nose I’ve ever seen,”

Those BLM fools need to get out more. I had an uncle, not black, whose nose wouldn’t have looked out of place on a C-130 gunship. We liked having him around in the springtime because he always vacuumed up all the pollen.

On the downside, when he sneezed, NORAD went on high alert.

We had a fellow in my classes at NAVTECTRACEN Pensacola we called “the beak of the week”.

If you haven’t taken the time to watch the entire video interview of Officer Jackson, I encourage you to set aside a half hour and do so – especially the first half where he describes vividly his experience of dealing with the crowd of rioters.

Our society depends on him and others like him to hold the savages at bay. If we lose the Thin Blue Line, we have lost ourselves.
.

Look, the BLM riots have nothing to do with protecting African Americans. NOTHING. They are all about destroying this society.

George Floyd was NOT killed bu the police. The autopsy clearly showed, in great detail, that Floyd was not injured or killed by the police. He dies as a result of advanced hearty disease coupled with the presence of extensive illicit drugs. Nothing that the police did was illegal oir even improper. Rayshard Brooks was intoxicated and in control of a motor vehicle. He violently resisted a lawful arrest, disarmed a police officer than attempted to use that weapon upon a second police officer. He was subsequently shot and killed. Again, the police did nothing wrong. Yet, bogus claims about these two incidents are being used to justify the civil insurrection in this country.

A small group of people, with the backing of the liberal establishment have gone to war against the rest of the citizens if this nation. It is time that this was put down, immediately. Our economy is trashed. Our cities are in turmoil and in flames. Honest, law-abiding citizens can not walk the streets in safety. And, our leaders look on and shrug from behind their screens of armed guards. There is a backlash coming closer every day.

Down vote by accident.

I can’t imagine when the constitution and amendments were written, the authors envisioned coast-to-coast travel in a matter of hours – that a peaceful demonstration in NY, Boston, Philadelphia, etc., could be hijacked by communist agitators dispatched in real time from Seattle and Portland (Antifa).

It does seem like the framers intended political input/involvement to be mostly on the local level, in that ours is a representative form of government where change would be more organic and grass roots.

In keeping with the presumed spirit and intent of the framers, it wouldn’t seem unreasonable to weed out non-locals from protests – no doubt that would have prevented much of the destruction done by cowardly itinerant protesters hiding behind local protesters with legitimate beefs. But I don’t see any way to ensure protests remain localized short of going all “your papers please” Nazi.

About the black protester talking with a black cop only to be cut off by a white usurper, that’s where the fight needs to happen. If the black protester ‘obeys’ the white, that’s on them. If however the black asserts their right to speak and the white still interferes, the cop could potentially arrest the white for interfering with the black person’s civil rights (freedom of speech / association).

Absent that, I guess it’s up to the local protesters to identify and expel the usurpers from their midst. How I wish local protesters, who like so many have said don’t want to see their neighborhoods destroyed and looted, would have (citizen’s) arrested the destroyers and handed them over to police. What a different perspective / messaging that would make for these protests … protecting and preserving community while lawfully and peacefully protesting. I could respect that.

My former tech career took me to San Francisco for nine years – time I would like to have back. The ONLY people I had issues with were ‘educated’, straight whites and the occasional lesbian. Essentially my own people (sans lesbians). I got on great with Asian and Gay community. My “people” though made one of the most beautiful cities in the world a living hell. Seems to be the case in Portland as well…

I had a similar experience for four years in the People’s Democratic Republic of Austin. Even in the 1980s the town was a dump, yet the local media propaganda about “the great quality of life in Austin” was so thick you could walk on it.

LOL! I left SF and moved to ATX. It is better than SF but it is trying to become SF in Central Texas. But your statements are accurate. I got out a year ago.

Whitopia. def. Any place with far more BLM yard signs than actual black people. The irony is that these riots can only occur in Whitopias like Portland and Seattle because if they tried to do it in Balmer they’d likely get shot by the people they are claiming to help.

Read some of the comments of the so-called, alleged, self-congratulatory “Progressive” Dhimmi-crats, directed at this courageous law enforcement officer — you’ll encounter the most vicious, racist, insulting and denigrating comments, imaginable, all because the officer dares to criticize the obvious racism of white Dhimmi-crat jackboots.

White Dhimmi-crats represent everything they claim to oppose — unabashed and gleeful incivility, intolerance, totalitarianism and racism.

Are “slurs” somehow prohibited by the 1st Amendment? Isn’t “hate speech” nothing more than speech.

Portland has become a living testimony to hatred, bullying and racism.

BLM is nothing more than domestic terrorists with carte blanche.