“They screamed ‘All Lives Matter’ and splashed blue paint in support of the police.” 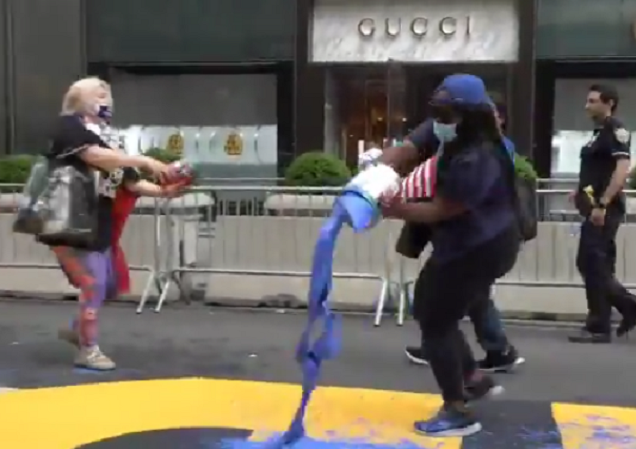 The city-sanctioned “Black Lives Matter” graffiti outside Trump Tower in New York City has been splashed with paint for the second time in a week.

A small group of Blue Lives Matter and All Lives Matter activists poured blue paint on the graffiti and several of them were arrested.

A group of Trump supporters dumped blue paint on the BLM Mural in front of Trump Tower on 5th Avenue. They screamed "All Lives Matter" and splashed blue paint in support of the police.
[email protected] for licensing pic.twitter.com/BQotr0cIvW

A local CBS outlet refers to the vandalism as vandalism, something the mainstream media does not do in the many cases of vandalism perpetrated by Black Lives Matter, antifa, and their associates among the fringe Marxist left.

At least three people were arrested after throwing blue paint on the Black Lives Matter mural in midtown — the second time in a week the Fifth Avenue mural has been defaced.

The alleged vandals threw the paint in what appeared to be a coordinated effort involving about 10 people around 4 p.m. Friday. There were plans going around on social media with a group of people discussing pulling off the stunt.

One of those arrested, a woman wearing a rainbow flag as a cape and a shirt that read “All Lives Matter,” was put into custody, smirking when asked why she did it. She was seen on video dumping a can of paint while running along the length of the mural, with another woman joining her, and then putting hand prints into the spilled paint.

The second woman later spoke with NBC New York, saying that it should read “All Lives Matter” and that using taxpayer money for it was wrong. One of the people taken into custody appeared to be the same woman who talked with News 4 just a week ago, and vowed at that time that she would come back to deface the mural.

The “mural” has been “defaced,” but statues, businesses, streets, and police cars being sprayed with ridiculous slogans and hate . . . silence.

notamemberofanyorganizedpolicital in reply to Whitewall. | July 18, 2020 at 10:13 pm

QAlerts
@
Bevelyn Beatty, we are with you fellow Patriots. ThanQ for your stand. The people are waking up worldwide.

Full video while it lasts.

I love that throwing paint all over the BLM sign is a daily thing now.

NYC is messed up…don’t live there.

Antifa-BLM-DNC all going down together.

I love whoever smeared the blue paint….it is so perfect.

The perp is black! Oh, the irony!

Oh, Fuzzy, you don’t really need the two qualifiers before “Left” anymore. It gives the Left an out they don’t deserve.

This is political speech, not vandalism, and not like tearing down a statue or artwork in the slightest.

How many people actually follow progressive convention and exercise liberal license to indulge diversity (i.e. color judgments) including, but not limited to, racism?

The polling must be really progressive, if Cuomo is so desperate to embrace some, select, Black Lives Matter in order to cover up the excess deaths of Planned Parent. 50 Shades of Obama/Biden/Clinton Water Closet and 16 trimesters of witch hunts, warlock trials, and protests. #BLM

This partially restores my faith in the residents of Manhattan.

The White Supremacists are certainly swarthy in NYC

I am old enough to remember when the Communists solemnly informed us that slamming a 90-year-old grandma to the ground was protected “free speech”.

So you are what, three weeks old. Seems we have seen and heard that just last month. (Sorry, couldn’t help myself.)

In my study of communist societies, I came to the conclusion that the purpose of communist propaganda was not to persuade or convince, not to inform, but to humiliate; and therefore, the less it corresponded to reality the better. When people are forced to remain silent when they are being told the most obvious lies, or even worse when they are forced to repeat the lies themselves, they lose once and for all their sense of probity. To assent to obvious lies is in some small way to become evil oneself. One’s standing to resist anything is thus eroded, and even destroyed. A society of emasculated liars is easy to control. I think if you examine political correctness, it has the same effect and is intended to. ― Theodore Dalrymple

There are three lights.

A little decoupage action going on with the flyers embedded in the paint. Love it! 😉

My understanding of First Amendment precedent is that, although government may regulate the time, place or manner of speech, whatever criteria it uses to do so must remain neutral regarding the political content of that speech.

Is that the case here, or are some street messages de-facto permitted while others are not?

It depends on whether this slogan was painted by an outside group or by the city, and whether there was a permit issued.

If the city painted the slogan then it’s the city expressing its own opinion, and it does not have to allow anyone else to use its property to express a contrary opinion. Remember that the city has first amendment rights too.

If an outside group painted it with a city permit, then the city can protect it from vandalism, but it must issue similar permits to anyone else who wants to express a contrary view.

If an outside group painted it without a permit then it’s vandalism, and it makes no sense to protect it from further vandalism. In fact “defacing” it with black paint would seem to be repairing the damage, and thus lawful.

Lawyers. It’s a city street, nothing should have been painted on it except other than for traffic control purposes in the first place.

One would think.
Do any residents have standing to sue? What a waste of taxpayer money!

It’s the City’s street, the City can paint whatever it likes on it.

It can also permit other people to paint what they like on it, but that creates a limited forum, and those have to be viewpoint-neutral. So who created this, and by what authority, is crucial, and yet I haven’t seen one news report that gives this information.

And no, residents not only have no standing to sue, they also have no grounds. The streets are the property of the city, not of the residents.

Who the hell do you think paid for that street that the “city” owns?

Blue paint?
I just saw a video of somebody else pouring black paint and chanting “Jesus matters.”

That was a different incident that happened later.

Pedantic and somewhat OT pet peeve on these street “murals”: How is something painted on the street a “mural”? Doesn’t the word itself indicate that it must be on a wall?

painting on a wall, by 1915, short for mural painting “a painting executed upon the wall of a building” (1850), from mural (adj.) “pertaining to a wall or walls” (mid-15c.), from Latin muralis “of a wall,” from murus “wall” (Old Latin moiros, moerus), from PIE *mei- (3) “to fix; to build fences or fortifications” (source also of Old English mære “boundary, border, landmark;” Old Norse -mæri “boundary, border-land;” Latin munire “to fortify, protect”).

Latin muralis “of a wall”

Heh, that’s what I get for opening this thread a couple hours ago, then reading and commenting 🙂

Yes, that has been bothering me too. I cannot refer to it as a mural, because it isn’t one.

Why not? It’s not like they will be in jail for long.

The shrieking woman hysterical at letters painted in the street – something tells me she probably justified BLM looting and vandalizing businesses and setting them on fire. And she probably get this hysterical when the black kids were shot to death by other blacks. She probably played hysterical for the media.

It is absolutely crazy that the painting/mural/whatever is not considered vandalism or defacing but painting over it is. WTH?

I am a bit surprised that the upper windows of Trump Towers aren’t raining down blue paint filled balloons 24/7. What is the point of owning the high ground if you aren’t going to use its gravitational advantage?

There was yet another incident yesterday, to which Exiliado referred earlier: Two black women wearing “All lives matter” shirts spilled black paint on the yellow slogan, while shouting “Refund the police” and “Jesus matters”, and explaining that black lives matter which is why they need the police to protect them, and defunding the police costs black lives. The police arrested them after a while, and one cop slipped on the paint and hurt himself.

Does anyone expect the media to report honestly? The dishonest media is now down to eating its own on all of this stuff.

I walked by the “mural” yesterday. There are 3 squad cars and maybe 10 or 12 police officers guarding it. It’s also surrounded by a barrier. So nobody thinks there’s any spontaneous public support for DeBlasio’s phony street theatre. If left unguarded, the mural would be obliterated within a day.

I’m thinking balloons filled with paint from about the 5th floor or so.

Well done, I love that it took the officers such a long time to react. I assume they were doing due diligence not to offend anyone.

Correction to my earlier post: 27 officers are posted every day to guard the “mural.”

Imagine a million patriots with two water balloons full of paint each.

Simple fix to a RACIST Marxists Groups symbol.
Paint the letter “B” blue…. turning it into Blue Lives Matter.