Arson suspected in blaze within French medieval cathedral at Nantes

Arson suspected in blaze within French medieval cathedral at Nantes

Fire breaks out just over a year after a massive fire destroyed historic Notre-Dame Cathedral in Paris. 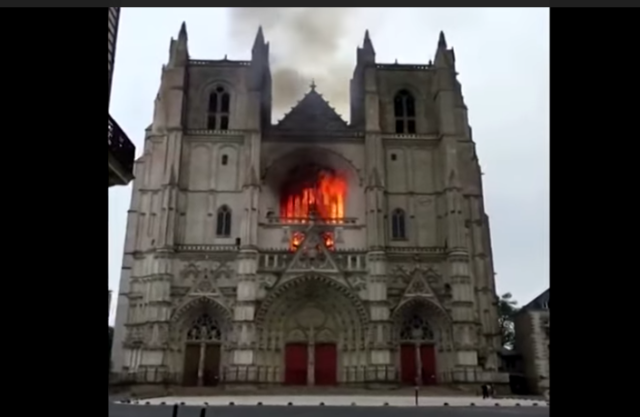 Arson is suspected in a fire that has ravaged the famous 15th-century cathedral in the French city of Nantes, blowing out stained-glass windows and destroying a grand organ.

French officials said they suspected arson was behind the blaze at the Cathédrale Saint-Pierre-et-Saint-Paul de Nantes or Cathedral of St. Peter and St. Paul of Nantes.

Prosecutor Pierre Sennes told reporters three fires had been started at the ancient site and authorities were treating the incident as a criminal act. He gave no further details.

The blaze began early Saturday morning around 7.45 a.m. local time (2:45 a.m. ET), engulfing the inside of the church with massive flames.

More than 100 firefighters battled for several hours to bring it under control and smoke was still coming out of the Gothic structure on Saturday afternoon, local time.

A preliminary investigation has revealed that the fire began in several different locations within the cathedral.

The city’s prosecutor Pierre Sennes said: “We’ve observed this morning that the fire started in three spots. This observation leads us to open an investigation for arson, an investigation to regional judicial police.

“The next phase will be working into the investigation, consultations, we will take a lot of statements. We will also verify the technical installations, the fire prevention installations, and again, we are waiting for this expert who could give us interesting elements.”

Fire Chief Laurent Ferlay told a press briefing in front of the cathedral that the blaze was not as big as the one that engulfed Notre Dame Cathedral in April 2019, and the damage is not as bad.

“I can confirm that we are not in the Notre Dame of Paris situation, rooftop is not affected,” Ferlay told CNN affiliate BFM on Saturday.

“The damage is concentrated on the organ, which seems to be completely destroyed. Its platform is very unstable and could collapse,” he said.

French churches experienced a spate of arson, vandalism, and other attacks in 2019. Currently, officials indicate that the investigation into the infamous Notre Dame inferno point to a cigarette or an electrical panel fire being the cause of the blaze.

Work on the restoration of the Notre Dame cathedral has slowed due to the coronavirus pandemic. For those of you who like classic architecture, there is some good news: Notre Dame will be restored to its original form.

A national heritage and architectural commission approved plans to restore the cathedral to its last “complete, coherent and known” state, including the spire, the restoration body said in a statement.

President Emmanuel Macron promised after the fire to rebuild Notre Dame within five years and later suggested that a contemporary design could be used for the spire.

Church officials hope Notre Dame will be open for mass by 2024 when Paris is due to host the Olympic Games.

Hundreds and hundreds of French churches have been torched in the last few years.

From Reading autobiographies of expatriates living in France, I understand that for at least the last 30 years the majority of French construction workers, such as electricians are Muslim. Isn’t that interesting?

The Friendly Grizzly in reply to notamemberofanyorganizedpolicital. | July 19, 2020 at 12:52 pm

Doing work the French won’t do.

notamemberofanyorganizedpolicital in reply to The Friendly Grizzly. | July 19, 2020 at 12:53 pm

The are French. Not illegal.

JusticeDelivered in reply to notamemberofanyorganizedpolicital. | July 19, 2020 at 3:27 pm

The french need to wise up, and get rid of all those Muslims.

On the good news front…..

(France could use some of this spirit.)

TheFineReport.com in reply to notamemberofanyorganizedpolicital. | July 19, 2020 at 3:25 pm

That is a great link!

All should see it.

And of course, the motives are unknown.

“We may never know.”
“Motives unclear.”
“Persons of Unspecified Race and Religion.”

“Inspector Clouseau, in helping narrow the focus of our search for suspects, you may be interested in knowing that France is approaching having 10% of its population as Muslim, and that Muslims detest Christians, Christian symbols, and churches.”

“That is entirely irrelevant to our investigation.”

A “refugee” from Rwanda has been arrested. We should wait and see if he is actually charged, but my money is on “arson by African and/or Muslim.”

What’s the point of the charade? All adults know that if the evidence points towards Muslims and/or Communists being the perps the investigation will cease.

The shorter, the better.

It’s clear that Western civilization has many enemies who are working to tear it down. Does it have any heroes who will fight to save it?

their response time appears to be pathetic. the twitter video shows a fully engulfed building. it had likely been burning for quite some time. yet, not a single fire truck to be seen. oddly there weren’t even any curious onlookers. it’s as though it’s become normal and expected. the church has survived since columbus left for the new world!

The fire brigade was told to stand down by Mayor Wheeler. /s

At least it’s not August when the entire country is on holiday.

The same thing is happening to Christian churches in Algeria, commencing in 2019, and I don’t think it is a coincidence , given the majority of French Muslims are Algerian.

Considering the nature and origin of Islam, I do not think it should be treated as a religion. It is more like a criminal cult.

There is no such distinction in law. A cult is simply a derogatory term for some religions. The first amendment protects all religions, whether or not they’re popular.

Arson is always to be expected anywhere you find a match, a Muslim, and some symbol of Christianity.

How odd that you never read about mosques going up in flames. Only churches. If a mosque were to go up in flames the howls of outrage would be deafening and it would quickly be classified as a “hate crime” and all resources would be thrown into finding the perpetrator. But nope, doesn’t seem to be happening. Wonder why that would be.

What you read and don’t read bears no relationship to reality. There may be many mosque fires in France that nobody is bothering to report.

Remember 1994-95, when the news media were full of reports of fires at black churches all over the USA, and there was much concern about this obvious wave of racial hatred? I remember reading a column by the great A.M. Rosenthal, saying that this must be white supremacist terrorism, because otherwise why are there no white churches burning? Then in mid-95 I saw a curious little piece in the NYT, reporting that in the past year 37 black churches had been burned, together with more than a score of white churches. And I immediately asked myself, How many more than a score? Isn’t it odd that a very precise number is used for the first statistic, and a very vague number for the second? Is it possible that the answer is seventeen more than a score? Or even more than that? White churches were burning too, but that wasn’t interesting so it wasn’t reported. And the whole thing was a big non-event. Church fires are common, and they’re hardly ever motivated by hatred for Christianity, let alone for the particular ethnicity that uses a particular church.

“the investigation into the infamous Notre Dame inferno point to a cigarette or an electrical panel” Those two things are not very close. How could the investigation “point” to both simultaneously?

Damage concentrated on the organ? Muslim double whammy! Destroy a Christian symbol and destroy a musical instrument (such instruments also being forbidden by Islam).