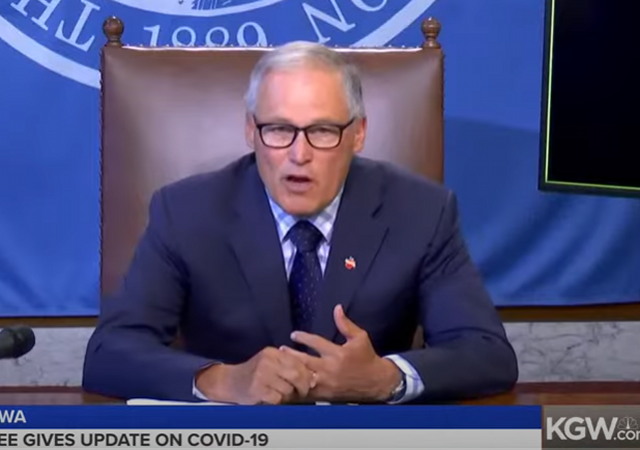 Antifa and Black Lives Matter activists have taken over a section of the city of Seattle. On Tuesday night, they took over the city hall.

Jay Inslee, the governor of Washington State, claimed during a press conference on Wednesday that he knows nothing about this.

Anagha Srikanth of The Hill describes what is unfolding:

As protesters around the country demand that cities defund their police departments, one group of demonstrators in Seattle is out to prove they don’t need the law enforcement officers.

On Tuesday night, protesters from what is now known as the “Capitol Hill Autonomous Zone” (CHAZ) were joined by other demonstrators as they briefly occupied Seattle’s City Hall. Speakers called for the resignation of Mayor Jenny Durkan and the defunding of the Seattle Police Department before leaving the building about 1 a.m., chanting “defund SPD” as they returned to the zone.

Located in the Capitol Hill district, the “Capitol Hill Autonomous Zone” surrounds the Seattle Police Department’s East Precinct. Police opened the area to demonstrators on June 8 after closing the streets in response to protesters demonstrating against police violence after the death of George Floyd. The East Precinct remains staffed, but Assistant Chief Tom Mahaffey said in a statement they were taking measures for the safety of officers and the building.

Governor Inslee was asked about this on Wednesday and said it was news to him. Watch:

"That's news to me". pic.twitter.com/L3LT86Zxgq

Either Inslee is dangerously unqualified for office, or he is lying. What’s happening in Seattle is national news.

.@GovInslee is acting like he didn’t know protesters had taken over city hall and declared a “Capitol Hill Autonomous Zone” but…

Wow. @GovInslee said he had no clue about the #SeattleAutonomousZone.

Antifa, anarchists and community activist took an entire 6-block radius of his biggest city, have roaming armed guards doing ID checks, and Inslee has no clue.

WHAT ARE YOU DOING, INSLEE?!

Watch a clip from Tucker Carlson on this below:

Out of touch @GovInslee said he had no clue about the #SeattleAutonomousZone.

Antifa, anarchists and community activist took an entire 6-block radius of his biggest city, have roaming armed guards doing ID checks, and Inslee has no clue.

A real insurrection has taken over part of the state’s largest city and the governor is looking the other way. Unreal.

Inslee is not that stupid.

CorkyAgain in reply to notamemberofanyorganizedpolicital. | June 11, 2020 at 3:37 pm

“Do these glasses make me look smart?”

Subotai Bahadur in reply to notamemberofanyorganizedpolicital. | June 11, 2020 at 4:27 pm

There is nothing that rules out him being that stupid, AND him lying because like the Socialists who run Washington he is on the side of the occupiers. In fact, I rather suspect that the city and the state are both providing logistics support for CHAZ.

Joe-dallas in reply to notamemberofanyorganizedpolicital. | June 11, 2020 at 4:50 pm

In Inslee’s defense – The NYT, CBS, ABC, CNN, WP MSNBC did not know about either.

It took the elite media 4 days to find out about it.

… like the Governor, the MSM is feigning ignorance because they’d prefer not to talk about it.

Looks like they do know how to wait and verify…when it favors the left to do so.

Yes, actually he is.

McGehee in reply to notamemberofanyorganizedpolicital. | June 11, 2020 at 4:57 pm

He’ll take that as a challenge.

JusticeDelivered in reply to notamemberofanyorganizedpolicital. | June 11, 2020 at 5:06 pm

At what point do the Feds step in, with lots of body bags and give these clowns appropriate attention? Give them one chance to lay down their arms and submit to arrest. Make sure the bags are in clear view.

If the feds come in, they should just set up a perimeter and not let anyone in or out unless that person unconditionally surrenders to the US and gets fingerprinted. Soon enough, most of them will really want out.

Let’s start a riot with the theme “Defund the politicians”.
Bet we’d see swat, nat guard and possibly the army all armed with real weapons shooting real bullets.
But it’s a chant whose time has come.

The gov is actually suffering from NBS——No Balls Syndrome. You get it when you have no balls.

Can we please do away with sign language theater?

No doubt. It’s just another absurd form of virtue signaling.

Sub titles can be generated in real-time by speech-to-text technology.

If I wanted to see a mime, I’d go to the circus.

When I saw this last evening my “liberal self” said in response to the sign language interpreter “WTF is up with that clown? He’s bouncing up and down like he has poison ivy on his balls and ants in his pants.” But my self-shaming Antifa side shot me a viciously dirty look and I got religion really quickly.

My grown up self just shook my head and moved on.

Antifa and Black Lives Matter activists have taken over a section of the city of Seattle. That’s a bald-faced lie. What you’re calling a “takeover of a section of Seattle” is just the Democrat Convention. The Dems merely changed the venue and date without making an official announcement.

He took a page right out of the bamster’s playbook. “I just heard about it in the news”. He must have a very low opinion of his states residents. SMH ?

No doubt based on the knowledge that they voted for him.

Maybe he should open his eyes and unstop for a change. And stop being afraid to speak the truth.

The three monkeys “See no evil,” Hear no evil,” and “Speak no evill” come to mind. Except you have to acknowledge evil see, hear about, and speak about evil exists in order to defeat it.

Now understand, he is firmly convinced his staged stupidity is enormously popular.

In one year we have realized 1984, Animal Farm, Fahrenheit 451, and Idiocracy.

Lying.
It is what politicians do.

Well he’s now exceptionally qualified to be mayor of Chicago.

notamemberofanyorganizedpolicital in reply to The Friendly Grizzly. | June 11, 2020 at 4:27 pm

Morning Sunshine in reply to notamemberofanyorganizedpolicital. | June 11, 2020 at 5:00 pm

did not mean to down vote. Meant to reply

Maybe he is a Lesbian stuck in a male body? I have heard of that condition before…

notamemberofanyorganizedpolicital in reply to Morning Sunshine. | June 11, 2020 at 10:45 pm

Have you noticed all the men who get a sex change to female then come out as lesbian?

Sooner or later, Seattle will have to act … 6 square blocks of prime real estate not generating revenue for the city? Their little “protest” will prompt a tax-revolt/protest by the real property owners – insurance companies – service providers – rental fees … they’re basically squatters now.

How many of those businesses will be leaving Seattle?

Considering the fact that CHAZ is smack dab in the center of a run-down part of the gay district maybe he’s hoping it gets burned out and all the LGBTQ residents with it.

notamemberofanyorganizedpolicital in reply to RationalAnarchist. | June 11, 2020 at 10:55 pm

So that happy….er….gay hood was probably a ghost town when they “took” it over…….

notamemberofanyorganizedpolicital in reply to RationalAnarchist. | June 11, 2020 at 10:55 pm

So that happy….er….gay hood was probably a ghost town when they “took” it over…….

Playing stupid, to cover one’s derriere and to avoid taking responsibility — just liked the mendacious, sainted Obama. Pathological, self-reverential narcissist, Obama, perpetually believes that he’s allegedly the smartest, most brilliant person in any given room, yet, every scandal that he was asked about, he claimed he had learned about by watching CNN. Remember how he claimed ignorance of crone Hillary’s private email address and server, yet, emails were later produced showing he communicated with her, at that address! Liar.

Maybe Former Dear Leader can subscribe Inslee to some of the newspapers he used to read to find out what his administration was doing.

Actually, I think we let this go on for a bit longer. Make sure we get lots of video. Then broadcast it to the people. I think there are a lot of liberal Americans who think that their liberalism is all kumbaya and peace signs. When they see where their ideas end up, I think – I hope – they will vote otherwise.

maybe I am too optimisitic.

I think you’ve got it right. There’s a certain inevitability to these anarchists who think they can organize anything larger than a child’s tea party, and then when reality slaps them in the face, they go a little bonkers. Ok, a lot bonkers. I expect about a week before stories of rape and murder start flooding out, and two weeks before they start bringing out bodies from the inevitable infighting.

Inslee doing his Sergeant Schultz act: “I knows nozzing, I sees nozzing, I hear nozzing”. He’s as dumb as a brass monkey, but he’s what the voters of King and Pierce County want.

Only John Banner can play that part.

Like the Captain of a ship, ultimate responsibility is with him. He knows what’s going down, he’s just too chickenshit to do anything about it.

He’s part and parcel of it.

No, he just doesn’t want to admit to the legal liability of knowing certain things, much like Obama did not admit to knowing about the Flynn case, or the other FBI investigations into his political rivals.

How easy their treason is for them.

He must be a true swamp believer: swamp before country.

We need to depose all of them.

Actually the insurrection isn’t merely national news – it’s gone global! For Inslee to not know something that folk around the world know is pretty disturbing.

What? No Baghdad Bob comparison?

He’s his twin no?

The inmates are in charge of the asylum. It’s not just a saying anymore. It’s happened!

Yes, this fool/tool can be this stupid.

Maybe Gov. Inslee needs to get his head out of his liberal rear end and get a fresh sniff of what is happening in his state.

If he didn’t know, then it’s likely Charlie Manson didn’t know his followers were on a murder rampage.