“…we got hundreds of comments wanting my dad dead and saying they hope he gets shot in the face. I have stayed silent until now, but I’m not doing that anymore.” 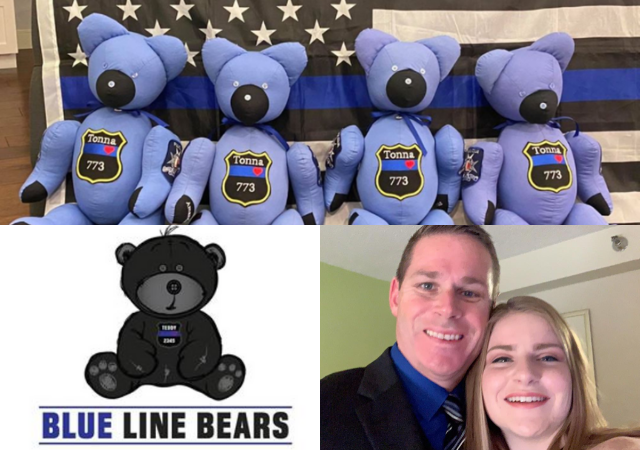 Megan started Blue Line Bears when she was 14-years-old. The daughter of a cop, Megan takes the uniforms of fallen officers and turns them into keepsake teddy bears for children who have lost a law enforcement officer parent.

Now Megan is receiving death threats for her support of the law enforcement community.

Saying I am heartbroken is an understatement. 3 and a half years ago when I started Blue Line Bears tensions were high in the United States and police officers were under attack. I received hate comment after hate comment, most along the lines of “I hope your dad is the next Officer you make a bear for.” The hate comments never truly disappeared, but they became less frequent until these past couple of weeks. I posted something that was pro-police on my own personal social media and got attacked by my own classmates calling me all sorts of things.

People who I saw as friends blocked me and called me toxic. I watched the increase in police injuries in New York and wondered if those were officers I’ve given a patch to. I scrolled through social media posts to be met with nothing but anti-police rants. My heart broke more and more everyday. Yesterday my family made the decision to get rid of the wrap on my Jeep, because it’s not safe for me to drive anymore.

My heart shattered and I finally let myself cry over this (as seen in the deleted post from yesterday). The comments were positive in the beginning until we got hundreds of comments wanting my dad dead and saying they hope he gets shot in the face. I have stayed silent until now, but I’m not doing that anymore. These people can troll and hate on my dad and me, but all they’re doing is fueling the fire that will make Blue Line Bears more and more successful. I will not stand down.

Megan and her family also unwrapped their Jeep, which was covered in a Blue Line Bears advert. 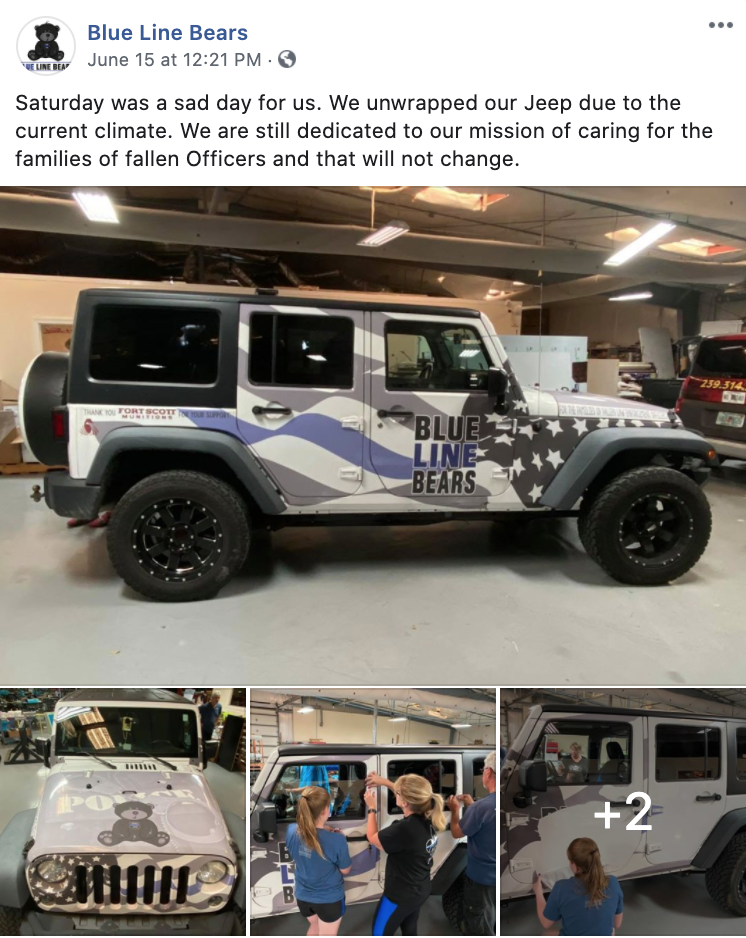 Heartbreaking. The world is privileged to have Megan, who deserves support and kindness for the compassion and empathy she shows others in their darkest hour.

Jeez oh Lou…..these people are beyond evil. I don’t advocate violence, but it is going to take force to eradicate this mentality. Sadly, I think it will never stop

It will stop, one way or another. They will win, or civilization will. I hope there are sufficient Americans who are willing to turn off the TV and get off the couch to defend civilization and the nation. If not, they win.

notamemberofanyorganizedpolicital in reply to Edward. | June 23, 2020 at 6:39 pm

All those threats CAN be traced back to their source, and should be………

Someone send this article to Team Trump.

Actually, sociopaths/bullies stop only when stopped. Otherwise, they continue even when they successfully control you. Look at the never-ending terror in Communist countries like Cuba.

The enemy is evil and the enemy intends to win. Surrender will not save anyone.

It’s going to take prosecuting people for violence and threats of it. That is starting to happen, and long overdue. O Hoo Hoo certainly didn’t do it. Trump and Barr are.

That, and defunding schools and universities that serve as indoctrination centers for this krp. That can’t start soon enough. I taught child development in a University in the ’80’s. It was bad for conservatives then– a fellow professor told me my belief in God amounted to believing the world was built on the back of a turtle. Even then black students accused you of racism when caught cheating, or when told “no test til you take alternate seats.” Back then you could tough that out — just insults and insolence.

Don’t believe you could tough that sort of thing out now. I know I would be harassed within an inch of my life for one lecture topic: why fathers are necessary in children’s lives.

notamemberofanyorganizedpolicital in reply to hopeful. | June 23, 2020 at 6:41 pm

All on campus college classes must be banned for the coming year.

They can do it online.

Forgot to say– am I angry at the destruction and violence? You betcha. Angry at the pandering, boot-licking (to be polite) CEO’s and Dem governors and mayors who allow, excuse and even encourage this kind of thing? You betcha.

Am I alone? har de har har. There are millions and millions of me out there, mad as hell. What can we do? Start by putting the SOB’s in federal prison, like Barr and Trump are starting to do. See how tough they are in that environment.

It will stop when it becomes really bad for their health.

A lot of them are sheep. They probably normally aren’t anti-cop. But they fall into line once their tribe starts bashing the police. Once the left moves onto the next thing, many will forget they were ever anti cop.

I’ve seen that crap in my own family, it’s sad

This is what comes from letting them persecute Zimmerman, Wilson and many others. If they had been prosecuted then, we would not probably not have this problem today.

Since persecution of Zimmerman continues, then the case can still be prosecuted.

It would be very funny if that happened.

So much easier to hate and tear down than build. I’m praying for you (Megan) and your family. Be safe and keep your faith – this crazy time will pass. Thanks to your father for his service.

This is the kind of slime you get when you become your kid’s pal, not a parent. Don’t let them intimidate you girl.
The right sees the left as people with bad ideas. The left sees the right as bad people with ideas.

In a healthy society, there’s no need for the law to police everything. Decent people know how to act. All that is still true, but a healthy society must also be able to deter and/or stop the hateful and indecent. Otherwise, the law must do it. As Edmund Burke observed:

“Society cannot exist, unless a controlling power upon will and appetite be placed somewhere; and the less of it there is within, the more there must be without. It is ordained in the eternal constitution of things, that men of intemperate minds cannot be free. Their passions forge their fetters.”

Our Constitution was made only for a moral and religious people. It is wholly inadequate to the government of any other. — John Adams

How about with empathy and ethics. Some of the evilest people I have known wrapped themselves in a cloak of religion.

Is that not wrapped up in the word “moral?” It doesn’t do any good if you are religious, but don’t live by the moral code espoused by that religion(*). Similarly, if you are moral, but have no moral code to live up to, it is meaningless.

Like you I have seen some who are “religious” but were not following basic tenants of their religion. I’ve seen a handful who were moral but not religious – but they still lived by a basic code of conduct. There are evil humans in any group – our job is to live life as best we can – being the best person we can be, raise the next generation to be the best they can be, and not harm anyone in the process. We also need to stand against evil when necessary.

* – Yes, I realize all religions are not equal. We should be able to agree that there are some basic concepts that need to be included in order to fit & sustain our Constitutional order.

They demand the freedom of beasts, without understanding that in the world of beasts there is but one law. The law of the jungle.

Huh. Didn’t realize Edmund Burke had said what I’ve been saying for years now. Govern yourself, or others will govern you. Because you will be governed.

OK – DOJ gender up. Form a task force. Identify, arrest, and prosecute everyone sending death threats as DOMESTIC TERRORIST. Get on it now!

Time to crowd-source the solution.

People subjected to death threats over the phone/internet/mail etc should forward all threats to a group that would track down the perpetrators. There are all sorts of legal tools available to do just that.

When appropriate, send all data to the proper police jurisdiction.

Just as important, build a database of the perpetrators. I’m going to bet that you find that it’s a relatively small number of people doing the large majority of these terrible acts.

With that database, go public. Shame them. Go Alinsky on them.

That’s how you’ll stop the problem.

Put the folks who tracked down the bike lock wielding professor on it?

This will result in canceling the canceler. Most employers will shy off of someone associated with such activity.

Make sure that people understand libel defamation. Frame allegations as questions or opinions. Do not make the really stupid mistakes Oberlin College made.

I think it was Pew that found that more than 70% of political tweets came from only 6% of accounts. So, yes, I am betting you would find the same jackasses behind a lot of these threats (and bots that follow them).

When will this anti-police idiocy end? That’s easy enough to predict. It will start to end when these idiots get their way and their intense pressure results in huge numbers of police officers quitting. The real end will occur when the rich and loud mouthed Left is sitting at home when someone breaks into their homes to steal from them, hurt them, or whatever, and these loud mouthed Leftists call the police only to discover that there is no one there to respond. At this point we will hear about the terrible injustice of not having a police force…….

These people are garbage–anyone who would attack her over what is clearly a good program should just burn in hell, along with all of the rest of the criminals and losers.