RNC to Move Convention from Charlotte to Jacksonville

RNC to Move Convention from Charlotte to Jacksonville 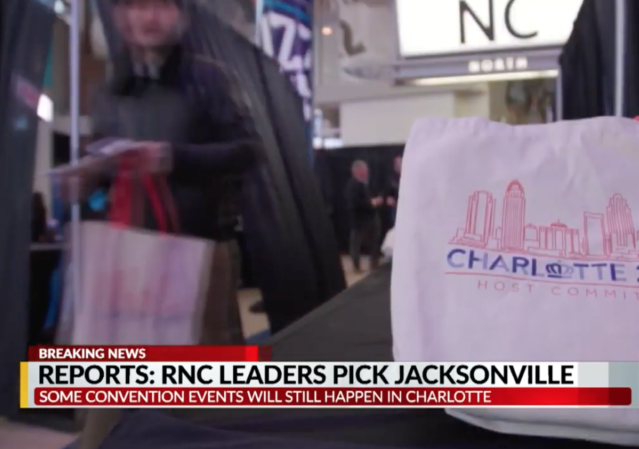 The Republican National Convention announced Thursday that it will be moving its convention from Charlotte to Jacksonville.

Before the pandemic, Charlotte was to host the RNC. But post-pandemic crowd plans posed planning problems for Trump and RNC officials. Unable to come to an agreement, the RNC is moving the convention to Jacksonville, which is reportedly more accommodating. Some RNC business will still take place in Charlotte in order to fulfill contractual obligations.

The WSJ has the full story:

The Republican National Convention will move its marquee events to Jacksonville, Fla., organizers said, ending weeks of uncertainty after President Trump battled with the governor of North Carolina over social distancing precautions that could have limited crowd size.

The task of nominating the party’s candidates for president and vice president will be done in Charlotte, N.C., with a limited number of delegates, but the big convention events—chiefly Mr. Trump’s acceptance speech—will shift to Jacksonville, which raced to put together a proposal and overcame concerns about hotel and arena capacity.

The convention will be held Aug. 24-27, according to people familiar with the planning. It places Mr. Trump in the most prized swing state, which has 29 electoral votes and which he narrowly won in 2016.

Charlotte was selected as host in July 2018, besting Las Vegas, and preparation for a 50,000-person event was well under way. Then the coronavirus pandemic hit. RNC officials and Democratic Gov. Roy Cooper recently exchanged letters over measures that would be taken to protect convention attendees. But they didn’t reach a resolution, as Mr. Trump insisted on a full-capacity audience. The RNC will conduct some limited business in Charlotte as it has a signed contract with the city.

Might as well get everybody exposed to this rhinovirus so it’ll die out.

Everyone that can get it will. Sooner or later. Until there aren’t enough left to keep the virus going. Herd immunity.

Not for long….everything named after any Jackson will soon be cancelled.

Naaah. They will remove “Andrew” and substitute “Je$$e”.

Jacksonville FL has a lot of leftists. I expect trouble.

Those south Georgians won’t let that happen, also plenty of retired military in that area.

I hope they get curb stomped

Not really. The blue parts of Florida are in the south and the I-4 corridor. Jacksonville is more Georgia than Florida.

Jacksonville also has a lot of Conservatives. I know, that’s Home. But yes, denizens bracing for Leftist violence, most of it imported.

Jacksonville is a better choice than Charlotte IMO

See? How hard was that?

They’ll be plenty of riots, but we’ll be prepared.

We are in a civil war, folks. The ‘cease fire’ is temporary.

My great fear is a coming military coup: like clockwork, these former swamp generals are mysterously popping out of the woodwork with something bad to say.

If there is a military coup, it’ll be balls-out civil war: no one will control the nation – it’ll be total chaos.

Look, many of us predicted this was coming. We are the same poeple who called obama the “Manchurian Candidate”.

there is no way the US military will obey some crackpot general ordering a coup. Our bird colonels run the military not the generals and the colonels are true blue to the Constitution.

Obama purged the officer corps during his tenure. Things might not be as solid as you think.

I would not mind seeing Obama purged, not because of the color of his skin, rather because of his nature. Obama is a smooth talking suit full of crap.

I’m with you TFR. Take away his teleprompter and he is all stutter.

He’s not smooth-talking without his Teleprompter. ?

Obama’s Purge of the Military:

This military coup threat is a very real one.

My brother is a retired bird colonel who is as lib as it comes. How that happened I have no idea. But I also have no doubt that he would have followed any order given

I just hope all the nice folks in NC remember that the GOP tried to get it there but the governor crapped on the people and the GOP just for politics. I understand that’ll cost them $200 million in lost “free” money from the convention.

The GOP would do well to remind the public about it.

My parents are nice folks (Trump supporters) in Charlotte and are happy to see it leave, especially this year. Who needs the usual convention traffic mess and crowded dining spot, topped off with fires, looting, and Molotov cocktails?

It places Mr. Trump in the most prized swing state, which has 29 electoral votes and which he narrowly won in 2016

Yes, even though hindered by obvious vote fraud happening in Palm Beach and Broward counties. We can expect those counties to double down on their fraud this time around.

Is there a correlation between the decadence of a state and the number of colleges within that state?

It sounds like there is still a lot going on in Charlotte due to contractual obligations. Is there no force majeure termination?

I was wondering this myself. The governor says the convention can’t happen — isn’t that sufficient to cancel all contracts and avoid any penalty?

Freedom Plaza in Jacksonville will soon be renamed “BLM Plaza” before the Convention. It will still be trashed, but rioters don’t care – it’s all for the CAUSE.

I got your contract hanging Governor! Please stop by and get you some. Where I come from we call this dumber than dirt.

The higher up you go in the military, the more politically correct it gets, and the more ‘woke’ you have to be to get promoted.

Eight years of that treasonous slimebag obama wreaked unimagineable damage to every institution in our country, including the military.

Remember: the scumbag purged the military.