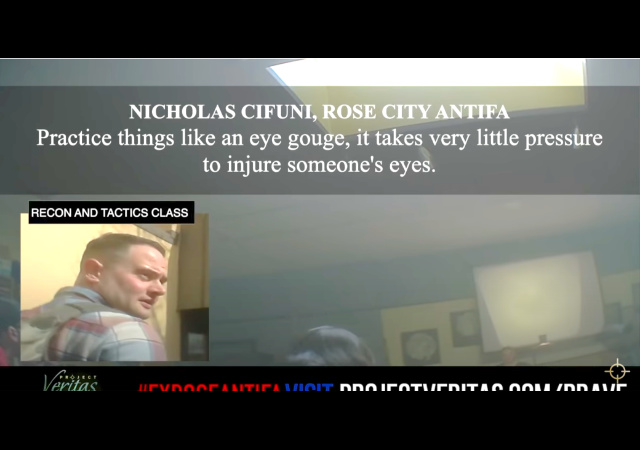 James O’Keefe’s Project Veritas dropped a video an undercover journalist made when they infiltrated Rose City Antifa (RCA) in Oregon.

(I’d say it’s funny, but considering what these people do, I won’t. But someone should inform them if they are truly anti-fascist, they wouldn’t carry a USSR or China flag with them.)

Caroline Victorin founded the Rose City Antifa along with her Swedish husband, who is a dual citizen. The journalist said there is a lot of communication between the European and American Antifa groups.

He described RCA as “structured, almost like a company or like a business.” This is why he feels “like there is some type of outside funding influence or resources being used.”

The journalist described the process to become a member. Antifa contacted him through Proton Mail. After a few emails they set him up with an interview in Portland, OR. He had to wear certain clothes and have a specific water bottle in a Starbucks. Someone came to identify him and took him to another place to meet with other members.

Antifa has its meetings in places like bookstores before they open. Everyone has to put their phones in the bathroom as a security precaution.

The bathroom is far from the main room, “but also has a fan that muffled any sound from the room” where the members meet.

The journalist brought up Black Bloc, which may not be a term many people have heard.

Black Bloc is what he is doing in the video. It is “a tactic in which individuals conceal their identity” so no one can identify them. It’s almost like a uniform.

The undercover journalist caught members encouraging others to practice eye-gouging since “it takes very little pressure to injure someone’s eyes.”

Other remarks from members:

Founder James O’Keefe said his organization “does not condone any violence whatsoever.” He also finds it sad that Antifa has hijacked “#blacklivesmatter protests in cities across the country, attacking the police and engaging in violence.”

The leftist pscyhos running the city just surrendered it to looters. Literally.

And Hollywood is a neighborhood in Los Angeles.

The left sandbags their own brownshirts by insisting they are “white supremacists.”
“Peaceful” rioters attack the Party’s own “Fake News” factory.
Burning cities dissolve their own police departments.
The Propaganda Rag of Record is held hostage by its own “woke” interns.

This is like the unwritten sequel to Atlas Shrugged.

I appreciate his bravery, but it’s another big nothingburger from PV. Yes, Antifa is evil and dedicated to mayhem, and they’re organized, and they’re very dangerous. Thanks for proving what I’ve already known for quite some time now.

“This is why he feels “like there is some type of outside funding influence or resources being used.”

WHO? WHO? THAT is the useful information we need! THAT is the question I keep asking – WHO is behind this, specifically???

You’re not the target market for these revelations.

I suppose not. But when we find out who’s been financing and building Antifa, then we’ll know who is REALLY trying to destroy this country. We all know someone or something is, and they have a lot of resources.

One hopes that the FBI/DHS/NSA have penetrated the nazifa network and can roll it up on command. Then again, nazifa isn’t Republican or Trump supporters But anarcho communists so they may well have CIA support.

notamemberofanyorganizedpolicital in reply to iconotastic. | June 4, 2020 at 3:54 pm

The interesting thing is, declaring them a terrorist organization, while it may not open up any special ability to investigate the local ones, should allow the NSA to crack open the international communications, and if a foreign nationals are conspiring with US citizens to harm or overthrow the United States, that does open them up to a lot of surveillance…

The resemblance to the Mafia is uncanny.

notamemberofanyorganizedpolicital in reply to McGehee. | June 4, 2020 at 3:35 pm

And to the Democrat Party…..but I repeat myself…..

ANTIFA AND THE DEMS

ARE ONE AND THE SAME.

Barry Soetoro in reply to notamemberofanyorganizedpolicital. | June 4, 2020 at 4:37 pm

Antifa is the Democrat Party’s reincarnation of the KKK. Thiz time their hoods are black instead of white.

The Mafia is a fascist organiation.

All fascist organizations are the same.

Have there been many eye gouges at any of these riots? I haven’t heard of any, which might suggest that this is more talk than deeds.

These twits weren’t star athletes , nor do they come from a military background (although they have allies in police forces). So, instead of gouging eyes they tend to swing a bike lock.

Antifa didn’t “hijack” BLM. They are both cut from the same cloth. Just like the common refrain that the ACLU has “lost its way” from the good old days. They didn’t “lose” anything. They’ve always been a communist, America-hating virus. #HailHydra

The betting window is now open:

The odds are 2 to 1 that some Oregon prosecutor will indict the Project Veritas journalist for offenses unrelated to his actual “crime” of exposing the terrorists.

Michael Brendan Dougherty
@michaelbd
So it starts with police turning their back, and ends with protestors doing the same. Heckuva job
Quote Tweet

No. Antifa – Black Bloc leadership and their captains are neo-maoist-leninst revolutionaries. Rank and file may be in it for a million different reasons but they’re fodder.

Don’t think they are all feckless punks with no experience or hand to hand skills. Some of the people I train with (mid level fighters- can easily take down and kill someone who doesn’t train) are likely among them. I doubt it’s unique to my gym.

In case anybody thought this wasn’t a contest of main force, n misdirection…

I do wonder what they think is going to happen when their people these tecniques were news to try that on people it’s not?

The other tactic they clearly teach — I wonder if teaching this is gonna pop up in some later Veritas release — is the taunting swarm. Watch the video of Andy Ngo getting brained for recording what Antifa was actually doing in Portland, without adhering to their messaging protocols. (It’s an organic, grass roots uprising. Complete with pre-printed press “guidance” n messaging. Riiiiight.)

It’s all misdirection as folks uniformed so you can’t distinguish one from another, loose clothing n carriers so you can’t tell what they’ve got, surround the victim at broken distance, poke, feignt, n misdirect. Eventually one gets enough opening to come the whole way in and connect. Then they swarm for the beat down.

Ever watch a Natl Geographic video of Jackals or Hyenias worrying at a cornered, usually injured prey animal? Like that.

It’s way, way, way too consistent across videos of Antifa attacks to be accident or one-off. If they’re folks likely can’t describe the tactic even if pressed only means the teaching is more formidable. People learn by example n mimicry. They converge on what works without being able to saywhat they are converging on. It’s called “sensory learning.”

Set up exercises with this tactic included and trainees will adopt it without knowing. (For extra impact, only “graduate” people who’ve internalized the tactic — game any promotion, standard or grading, so they don’t see this criteria.)

Bonus question: What are the counters to this tactic?

Hint: Look at what the antifa n their witting or unwitting shills are objecting too in others.