“Wilson’s racism was significant and consequential even by the standards of his own time.” 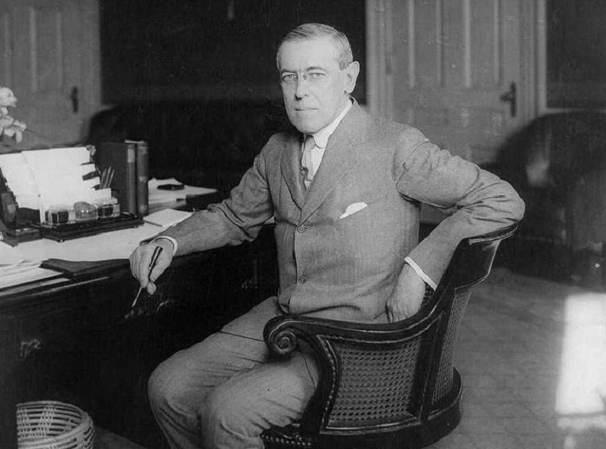 As cancel anything pre-Marxist Black Lives Matters moves from Confederate cancellation to all of American history, Princeton University has caved to the radical left’s demands that it remove Woodrow Wilson’s name from its public policy school.

Don’t get me wrong, progressive President Wilson was a loathsome and vile man, a proud racist who segregated both government and our military among other distinctly disgusting policies reflective of the progressive ideals of a perfect society and humanity in which the elite rule over the ignorant unwashed masses.  In other words, the perfect exemplar of today’s progressives on both the left and the right.

Therefore, I was a bit surprised that Princeton caved, particularly since they’ve been under pressure to do since at least 2015.

When Wilson the racist was president of Princeton, he established a policy that explicitly denied black people admission.  Indeed, Princeton didn’t grant a degree to a black person until 1947, “decades after every other Ivy League school.”

Here is the letter Princeton president Christopher Eisgruber wrote about the decision:

To the Princeton community:

When I wrote to you on Monday morning, I noted that the Princeton University Board of Trustees was discussing how the University could oppose racism and would soon convene a special meeting on that topic. The meeting took place yesterday. On my recommendation, the board voted to change the names of both the School of Public and International Affairs and Wilson College. As you will see from the board’s statement, the trustees concluded that Woodrow Wilson’s racist thinking and policies make him an inappropriate namesake for a school or college whose scholars, students, and alumni must stand firmly against racism in all its forms.As most of you know, the board previously considered whether to remove Wilson’s name after a group of student activists occupied my office in November 2015. The Wilson Legacy Review Committee conducted a thorough, deliberative process. In April 2016, it recommended a number of reforms to make this University more inclusive and more honest about its history. The committee and the board, however, left Wilson’s name on the School and the College.

The board reconsidered these conclusions this month as the tragic killings of George Floyd, Breonna Taylor, Ahmaud Arbery, and Rayshard Brooks drew renewed attention to the long and damaging history of racism in America. Board Chair Weezie Sams ’79 and I spoke individually to members of the board, and it then met on June 26.The board continues to respect, as do I, the Wilson Legacy Review Committee’s process and report, including its description of Wilson’s historical record and its “presumption that names adopted by the trustees after full and thoughtful deliberation … will remain in place, especially when the original reasons for adopting the names remain valid.” The board nevertheless concluded that the presumption should yield in this case because of considerations specific to Wilson’s racist policies and to how his name shapes the identities of the School and the College.Wilson’s racism was significant and consequential even by the standards of his own time. He segregated the federal civil service after it had been racially integrated for decades, thereby taking America backward in its pursuit of justice. He not only acquiesced in but added to the persistent practice of racism in this country, a practice that continues to do harm today.Wilson’s segregationist policies make him an especially inappropriate namesake for a public policy school. When a university names a school of public policy for a political leader, it inevitably suggests that the honoree is a model for students who study at the school. This searing moment in American history has made clear that Wilson’s racism disqualifies him from that role. In a nation that continues to struggle with racism, this University and its school of public and international affairs must stand clearly and firmly for equality and justice. The School will now be known as “The Princeton School of Public and International Affairs.”The University had already planned to close Wilson College and retire its name after opening two new residential colleges currently under construction. Rather than ask students in the College to identify with the name of a racist president for the next two years, the University will accelerate retirement of the name. The College will instead be known as “First College” in recognition of its status as the first of the residential colleges that now play an essential role in the residential life of all Princeton undergraduates.These conclusions may seem harsh to some. Wilson remade Princeton, converting it from a sleepy college into a great research university. Many of the virtues that distinguish Princeton today — including its research excellence and its preceptorial system — were in significant part the result of Wilson’s leadership. He went on to the American presidency and received a Nobel Prize. People will differ about how to weigh Wilson’s achievements and failures. Part of our responsibility as a University is to preserve Wilson’s record in all of its considerable complexity.Wilson is a different figure from, say, John C. Calhoun or Robert E. Lee, whose fame derives from their defenses of the Confederacy and slavery (Lee was often honored for the very purpose of expressing sympathy for segregation and opposition to racial equality). Princeton honored Wilson not because of, but without regard to or perhaps even in ignorance of, his racism.That, however, is ultimately the problem. Princeton is part of an America that has too often disregarded, ignored, or excused racism, allowing the persistence of systems that discriminate against Black people. When Derek Chauvin knelt for nearly nine minutes on George Floyd’s neck while bystanders recorded his cruelty, he might have assumed that the system would disregard, ignore, or excuse his conduct, as it had done in response to past complaints against him.The steps taken yesterday by the Board of Trustees are extraordinary measures. These are not the only steps our University is taking to combat the realities and legacy of racism, but they are important ones. I join the trustees in hoping that they will provide the University, the School of Public and International Affairs, and our entire community with a firm foundation to pursue the mission of teaching, research, and service that has defined our highest aspirations and generated our greatest achievements throughout our history and today.With best wishes,Christopher L. Eisgruber

Generally speaking, genocide does not necessarily mean the immediate destruction of a nation, except when accomplished by mass killings of all members of a nation. It is intended rather to signify a coordinated plan of different actions aimed at the destruction of essential foundations of the life of national groups, with the aim of annihilating the groups themselves. [Lemkin]
– etymonline.com

Mixed feelings here. Cancel culture has gone too far, and would like to see a reversal on it.

On the other hand, leftists deserve a taste of their own medicine.

Woodrow Wilson was despicable when it came to racism in my opinion.

And I detest a lot of what comes out of WW and similar Ivy League government programs.

And it would be kinda nice to hold it over their heads for a while longer.

notamemberofanyorganizedpolicital in reply to PrincetonAl. | June 28, 2020 at 1:55 pm

He was a Democrat AND a university president…..

Wilson is a different figure from, say, John C. Calhoun or Robert E. Lee, whose fame derives from their defenses of the Confederacy and slavery (Lee was often honored for the very purpose of expressing sympathy for segregation and opposition to racial equality). Princeton honored Wilson not because of, but without regard to or perhaps even in ignorance of, his racism.

He ignores the fact that Calhoun and Lee were 75 years earlier. They were the product of a different generation. Wilson wanted to overturn the lesson of the civil war and revert to antebellum status for blacks.

Wilson’s racism was clearly on display for all to see – no way they were ignorant of it.

Of course, if he’s honest about their racism, then they are no longer suited to lead the brave new world they are creating; no longer the Princes of Princeton.

And another Democrat bites the dust.

Roger Kimball on the subject is worth the read:

Politically speaking, 1913 was the worst year in the nation’s history,

March 3, 1913 – Democrat Wilson became president; Wilson the internationalist made the hard break from Americanism (government’s sole role being to protect natural rights), and set America on the pattern of endless world wars with America as the world’s policeman

April 8, 1913 – the 17th Am (direct election of federal senators) became part of the Constitution

Republicans should march in a Princeton parade tomorrow in celebration of this remarkable event.

Well, aside from that overt racism stuff, his megalomania and his control-freak-ism would make him a perfect godfather for modern leftism. At least if that position wasn’t already filled by Marx. And Pol Pot.

And that is a fact

This is the first of the current spate of un-naming that I can actually support. Wilson was a terrible person even using the standards of his day.

And that is a fact

And now, in all seriousness, do Robert C. Byrd.

If he was so bad, should we rescind the women’s vote also?

No. That happened in his time but it wasn’t his doing. And if it had been, it would just mean he got one thing right.

Good. They’ve finally found a target who actually deserves it. I don’t know whether Wilson was the worst president ever, but I do know he was worse than Barack 0bama, and that’s saying something. He does not deserve any honor. And no, erasing his name from positions of honor is not erasing history. He remains in the history books where he belongs. We don’t honor Hitler or Charles Manson or even George III, even though they’re all part of our history. So why should we honor Wilson.

I’m against cancelation by mob intimidation on principal, even if they occasionally get one right.

We should do this the right way, through petition and debate

“Indeed, Princeton didn’t grant a degree to a black person until 1947, “decades after every other Ivy League school.” ”

So the next logical step would be to expunge the names of EVERY Princeton president, chancellor or anyone in leadership from buildings before 1947. Tear down any statue. They were all racists.

Yes, and revoke the degree of anyone who graduated before 47 as they were part of it too. And the endowment should return the $ it received (with interest) from anyone before 47. Also any profits from any stock on the BDS list.

Princeton should lead by example; do it right.