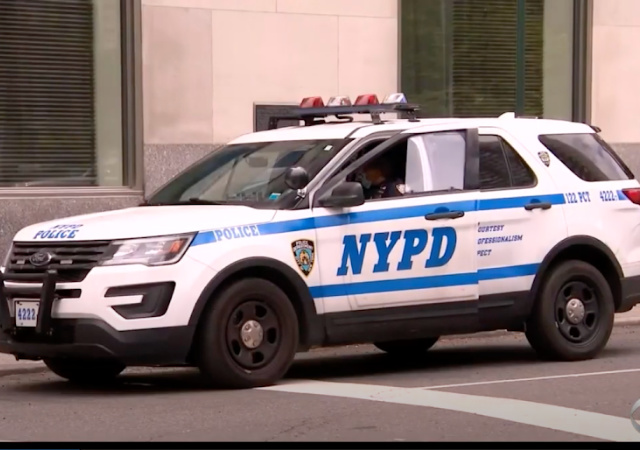 Some people in the NYPD are apparently sick of all the anti-police sentiment out there today. A couple of flyers being passed around by officers suggest that members of the force call in sick on July 4th to give the city the independence from police it apparently craves.

There are so many ways such a thing could go.

A labor strike is brewing in the NYPD.

A pair of flyers making the rounds among NYPD officers are encouraging them to call out sick July 4 — as retribution for police reform and a perceived anti-cop climate following the outrage over high-profile police killings of unarmed black men across the country, multiple cops told The Post.

One message calls for the strike to kick off at 3 p.m. July 4.

“NYPD cops will strike on July 4th to let the city have their independence without cops,” the message, which is being passed among cops via text, according to sources.

According to Stephanie Pagones of FOX News, a spokesman for the NYPD says this isn’t going to happen:

The flier states that the alleged “strike” will begin at “1500 hours,” or 3 p.m. The New York Post was first to report the news. Fox News has confirmed the report and obtained images of both messages. It wasn’t immediately clear who started the chain.

The message goes on to state that police are told they cannot strike because of New York State’s Taylor Law, formally known as the “Public Employees’ Fair Employment Act,” that bars public employees from doing so.

“The people and this city doesnt honor us why honor them,” the flier further states. “So its easy to loot and riot without repercussions but its not easy to do our job because the city will hang us.”

An NYPD spokesperson told Fox News any suggestion that the NYPD would not be available to do its job “is false.”

“New York City Police Officers will be here today, tomorrow, and on the 4th of July to protect all New Yorkers,” NYPD spokesperson Sgt. Mary Frances O’Donnell said in an emailed statement.

Whether this happens or not, it’s very easy to understand the thinking behind it. Police are being vilified as a result of the mania that has overtaken the minds of many Americans.

Part of me recoils at the thought, but (I have to say) a larger part of me says, “Go for it!”. Mayor deBozo and his family can’t stand the NYPD, dreaming of the Nirvana-like feel of a society without them, so let them experience it first hand……

All I know is that there is no way that I would ever be a cop in this atmosphere…..

notamemberofanyorganizedpolicital in reply to persecutor. | June 20, 2020 at 1:58 pm

So when’s the big D mayor going to rename NYC since it was named after a slave trader?

De Blasio will have his own private security force while everyone else is in the purge. But someone will punch him in the mouth and he will suddenly be furious.

Look what happened to Inslee of Washington…she shifted from “summer of love” to “domestic terrorism” when her house was vandalized.

Such a strike is needed to keep this country. The Democrats fear such police action. The police are to just surrender per the Dems.

We are in a civil war. Better to fight like this now than to fight later when the situation gets hotter.

We’ve been in a cold civil war for a while; now that they’ve been emboldened by CHAZ or whatever appellation the dipshits in Seattle are using today, I think that it’s about to get a bit hotter.
Glad that we’re better armed than they are.
Won’t they be surprised when they see that not everyone rolls over and plays dead for them.

The law says they can’t strike. But they can get sick.

“Sarge, I feel like crap. I have a fever, a cough, and I’m short of breath. I can’t smell or taste anything. But should I come on in anyway?”

In law enforcement, the best way to do what you want is to get your superior to order you to do it.

Won’t be the first time the NYPD got the Blue Flu…..
(I hope the superior officers remember how to be cops)

Good luck with that. Most “superior officers” are too busy sucking the dicks of the union reps for benefits to actually remember how to go out and be patrolmen any longer. If the Blu Flu (Wu Flu?) hits it’s gonna be fun watching NYC burn.

.
@Lucifer, no argument with the union stuff, but FUN to watch it burn? Come on.

How about some heavy-duty fireworks near the mayor’s house? YEAH!

Cities are hanging police out to dry, it is fair for police to give those cities a very strong dose of their own medicine. Allowing the most rabid criminal groups to pull this crap is bull.

I would rather see deblazio’s entire security detail call in sick for the 4th of July weekend. No augmentation from the regular force “Sorry I’m not trained for that.”

“The people and this city doesnt honor us why honor them”

It’s about more than pay. The job is inherently dangerous. Now the cops have to watch their backs. That could cause a cop to hesitate for 0.5 seconds which could be the difference between life and death for a cop. Shooting situations often last only 2-3 seconds from start to finish. The politicians have added a very dangerous and unnecessary risk to policing. The cops deserve respect (I think that is what is meant by “honor” in this context). They need to know they can do their job as well as it can be done.

Sure, but the right thing is to resign if the pay doesn’t cover the job. Jobs are for mutual advantage, work for money where both sides come out ahead. When that fails, don’t do the trade.

Mr. Hardin, sign up for an NYPD ride-along….unarmed, at the mercy of your political “superiors,” at the mercy of the mob, risking your LIFE if you take (or don’t take) any action. Let us all know how it works out for you.

I managed to reach retirement just as I was being threatened by killers, while my bosses were chuckling, “Now we’ve got him!” all because I refused to “take a knee.” These riots, the political response to them, and the price all LEO’s, businesses and many individuals are paying sends chills of outrage through me. I thank God every day for allowing me to escape the nightmare.

Many have lost the sanguine retreat of your specious pseudo-philosophical proposal.

There’s no dishonor in quitting. There is in a job action in spite of pay.

Your action leads down a long, dark road.

Who takes the job then? The criminals and the ones who are politically protected by the woke mafia.

Quitting gives the mob what they want…a form of defunding to make things in their own image.

If nobody wants the job under the new conditions, presumably they’ll change the conditions. But they’re not obligated to hire the people who quit.

Part of public unions being a really bad idea. X and Y shouldn’t gain more rights against Z by combining forces than they originally had individually. In particular they can’t force Z to negotiate with them.

The city can negotiate with anybody who wants the job.

The city doesn’t have the right to change the conditions post facto.

When cops do their jobs and the criminal has a heart attack like Floyd did they are charge with murder because it’s election season and Dems need blacks angry.

When they do their job and a thug fires a deadly weapon at them and they kill the thug their charged with murder because Dems need black full of hate.

Time for cops to leave the force and find work in a Republican city.

That is correct. The city is paying the police wages and benefits for the work that they do.

One of these benefits involves sick days.

If you’re actually sick. Honor system, if there’s any market for honor anymore.

When your leadership is dishonorable, this form of protest can be honorable. Dying on a hill for cowardly panderers that will throw you under the bus without hesitation is not honorable. Standing up for what’s right in the only peaceful manner at your disposal (if you are fortunate to have peaceful means left available)…that’s honorable.

I’m glad New York city’s subjects are disarmed. Someone might get hurt.

I was forwarded this:
Enough is enough!!!!

The city is no longer safe!!!

Citizens must take peaceful action to speak up and demand an end to the lawlessness that’s going on in Brooklyn on a nightly basis with fireworks all through the night.

This Monday night at Gracie Mansion we will all park our cars at exactly midnight and leave our cars on the street and walk to the corner and all together at the same time we will set off our car alarms and let the horns beep for 20 min and we will yell De Blasio must go!!!!

This will bring bad attention to the Mayor’s inability to run our city and at the same time remain civil.

All that can attend must do so!!!!