“On Saturday afternoon, vandals attached a sheet painted with anti-Semitic and white supremacy messages and it was immediately removed.” 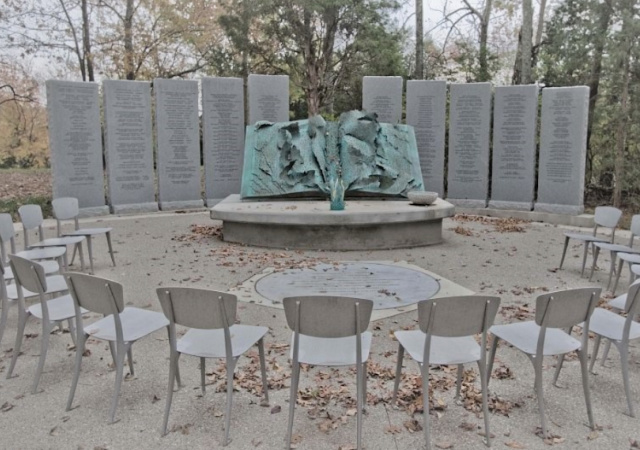 Samantha wrote about the spike in anti-Jewish violence in the wake of George Floyd’s death. It has not stopped.

Someone sprayed anti-Semitic messages on a bedsheet and spread it over the Nashville Holocaust Memorial at the Gordon Jewish Community Center on Saturday during the Jewish Sabbath.

StopAntiSemitism.org reported that someone wrote, “K*kes Lie, Whites Die” along with the numbers 14 and 88:

On June 13, vandals attached a sheet containing antisemitic and white supremacist messages on the Memorial Walls at the Holocaust memorial in Nashville. The sheet, which was taped to the granite memorials at some point during the afternoon, read “Kikes Lie, Whites Die,” and referenced numbers 14 and 88. The number 14 represents the 14 words in a white supremacist motto, and 88 refers to the eighth letter of the alphabet, making it shorthand for “Heil Hitler.”

The organization condemned the vandalism:

Our Gordon JCC community is deeply shocked and saddened by an attack on the Nashville Holocaust Memorial located on our campus. On Saturday afternoon, vandals attached a sheet painted with anti-Semitic and white supremacy messages and it was immediately removed. We condemn such bigotry and violence, which has no place in Nashville or anywhere in America. We are working with local authorities in their investigation, and the Jewish community security network was immediately informed of this incident. We are fortunate to have an excellent security team in place to protect us. They work hand in hand with local and national authorities to keep us and our campus safe. At a time when our nation is confronting racism and anti-Semitic attacks are rising, our JCC community continues to stand united with those who condemn discrimination in all its forms.

I could not find any pictures of the memorial with the bedsheet.

We are so saddened to see this – the #Holocaust Memorial in Nashville, TN has been vandalized with horrific #antisemitic messages “K*KES LIE”, “Heil

The memorial opened in October 2006 after Holocaust survivor Esther Loeb “was saddened that Nashville did not publicly recognize or remember the Shoah.”

The Gordon Jewish Community Center donated land and they raised $500,000 to establish the memorial.

Unfortunately, this is not the first time people vandalized the memorial:

In 2017, the Nashville community center, which offers recreational programming for people of all religious backgrounds, received three terrorizing calls, including bomb threats. Though the calls were a hoax, fear and frustration lingered.

add to that tomb of unknown soldier and many other atrocities
https://www.washingtonexaminer.com/news/philadelphias-tomb-of-the-unknown-soldier-vandalized-with-graffiti-saying-committed-genocide

The media will characterize this as right wing, white supremacists. If the police identify the culprits, they will almost certainly turn out to be BLM/Antifa types pushing a far left agenda.

That was my immediate thought, since the actual memorial wasn’t defaced it’s a false flag operation.

The average person will see “Nashville” and say, “figures!”.

I have no idea if white supremacists were responsible or not. Let’s see if the perps are caught.

But I can’t help but notice that Black Lives Matter is helping to create a “safe space” for white supremacists. No matter how much hypocritical BS lefty academics may try to shove down our throats, anyone with a functioning intelligence cannot help but notice that BLM and the KKK have eerie similarities. Both groups are racist and anti-Semitic. Both groups are profoundly violent and use terrorism for political purposes. Both groups use grievances (real and imagined) to justify their genocidal impulses.

How ironic it would be if BLM and its fanbois in academia and the media managed to mainstream the KKK!

And both groups are populated with cowards that talk tough but could not fight their way out of a wet paper bag with a sharp knife! Yellow cowards!

Our CHAZ/CHOP “Utopians” have just established a “no whites allowed’ garden.
What would you call that — a “Jim Crane” law?

Since we can’t publicly recognize God, it is no wonder that we can’t recognized God’s chosen people. Take down all the crosses!

Is there even one Holodomor or Armenian Genocide memorial in the USA?

Assuming it isn’t a hoax (a bed sheet? They didn’t spray paint the granite?), I guess ONLY BLM. And Jews are whiter than white to them, even with 70% voting for Democrats.

There is a Holodomor Memorial in Washington DC, about a block from Union Station. It’s part of the National Park Service, but to your point it’s not well known.

Also funny how the statue demolition crowd never gets around to the Lenin statue in Seattle. Well, except for selfies.

Who’s been instrumental in destroying black neighborhoods and black-owned businesses over the last few weeks?

Some tried briefly to blame it on right-wingers and white supremacists, but that didn’t last. And we’ve seen “hate” hoaxes before.

Well, the antifa types were white, but the burning and looting was done by the local blacks.

Antifa was the lit match.

Trading genuine religious faith for leftist ideology has its downside:

Smells like a hoax. Wouldn’t surprise me if it were yet another pathetic attempt to smear “right wingers” (i.e. conservatives).

Whoever is responsible for this, nothing changes the fact that 99.99% of contemporary Jew hatred is emanating from the Dhimmi-crats on the Left, and, their motley band of fellow Jew-haters in the black, black Muslim, white dhimmi useful-idiot SJW’s and Muslim jihadist communities.

There is definitely something fishy about this.

What kind of vandals care enough about the property to attach their graffiti to a sheet that can be easily removed???

I dunno about you, but if I were the detective on this case, my first suspect would be the guy whose job it would have been to clean off the graffiti.

Funny thing is that BLM, ANTIFA, White Supremacist are but a stone throw apart in their ideologies. They all dislike, hate, blame others based upon ethnicity or religion.

I don’t see any vandalism.

While I find this and the other vandalism abhorrent, I generally don’t believe in monuments and memorials.

The attempts to put memorials virtually everywhere can best be considered by the idea of placing an obelisk at the “exact site” of every senseless death. In the middle of street and highways, suspended somewhere between the tops and streets of tall buildings, on the bottom of the oceans, etc.

I take it you’ve never lived or traveled extensively in a predominantly Hispanic area… the streets and highways are a never-ended display of funeral sprays and family monuments. I’ve even seen a life-size steel bicycle where a cyclist got killed on the highway, it’s been there over 20 years and is maintained better than the local parks.

I don’t believe that it was White supremacists, at all, in fact, I don’t believe the thugs were White at all ! The BLM movement is a Racist movement, that is associated with the Democrat Party, and makes “Believe”, that it cares about people of Color. All that it wants to do is promote it’s Socialist, anti-semitic views. It was either BLM, or Antifa, which is ALSO associated with the Democrat Party. How ANY JEWISH person could possibly vote Democrat, with the Racist, prejudiced Democrat Party of today, is something I CAN’T understand !