Man Injured After Confederate Statue Falls on Head: ‘His Skull was Actually Showing’

Man Injured After Confederate Statue Falls on Head: ‘His Skull was Actually Showing’

“It came and fully hit him in the head, and his skull was actually showing … there was a great amount of blood. We are just asking everyone to pray for that man right now,” 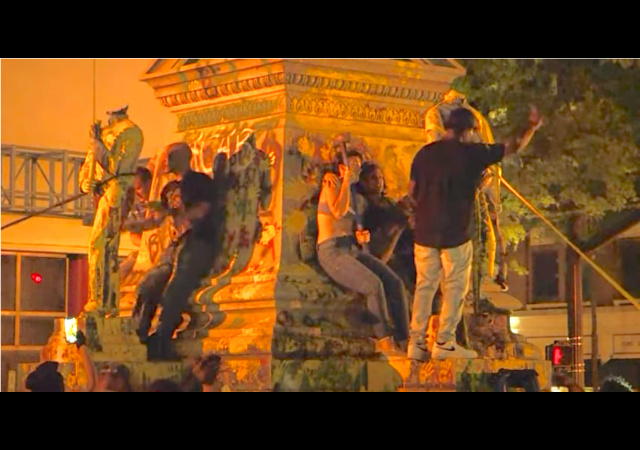 I am shocked this hasn’t happened more. The Black Lives Matter chapter of Portsmouth, VA, vandalized and toppled a Confederate statue.

President of @BLM757 describes what he saw of the incident. He says afterwords you could see part of the mans skull. He is Asking everyone to pray for the man who believes was in his 30s @WAVY_News pic.twitter.com/Lh5vQSVtOX

“It came and fully hit him in the head, and his skull was actually showing … there was a great amount of blood. We are just asking everyone to pray for that man right now,” said Aubrey ‘Japharii’ Jones, the president of the local BLM group.

The Black Lives Matter group organized a protest around the statue at 7:57 p.m. on Wednesday.

The City Council held an emergency meeting after these people threw paint on the monument and officers charged two NAACP leaders with trespassing:

While protesters were still gathered around the 54-foot-tall statue, council scheduled a public hearing on the relocation of the monument for July 28.

Under a state law that goes into effect on July 1, altering or relocating public monuments in the state of Virginia can occur. Following a public hearing—which the City Attorney couldn’t be for at least 30 days to account for public notice — the city has to wait another 30 days to offer the monument up to a museum or other group before moving it themselves. Under this timeline, Portsmouth’s monument may not move until at least September.

NAACP Portsmouth chapter leaders along with activists from Black Lives Matter 757 listened to the discussion as it happened.

“If there is something morally courageous to do, you don’t wait 30 days, you do it now,” said James Boyd, President of the local NAACP chapter. “If you get a legal challenge in court then you allow the city attorney and whole team of attorneys that can argue in the court like they did in 2017. So this was just more delay and disappointment.”

But now people want to know why officers didn’t step in.

Portsmouth PD Chief Angela Greene told the media she never ordered the police “to ignore the destruction of property.” She also said that “an elected official directed them to let vandalism of the Confederate monument to occur.”

NEW: @PortsmouthPD Chief Angela Greene says no order from her was ever given for officers to ignore the destruction of property. Rather…an elected official directed them to let vandalism of the Confederate monument to occur @WAVY_News pic.twitter.com/Vc4e5RZ9tA

“‘there was a great amount of blood. We are just asking everyone to pray for that man right now,’ said Aubrey ‘Japharii’ Jones, the president of the local BLM group.”

Just out of curiosity, Japharii, but where or to whom are your requested prayers being directed?

I’m praying for his soul. But NOT his physical health.
He deserved worse, as did all of them.

Just did. And a better tactical scope for the backup carbine.

Praying he goes quickly to the darkness. Probably doesn’t have health care and I don’t want my tax dollars to go to pay for his care.
Stupid is as stupid does, and he’s the poster idiot for stupid does.

As One Is Torn Down

Pelosi has even more blood on her hands now

Get with the program, Japharii: leftists don’t pray, unless it’s to Mao or Moloch…

They bray to their mortal gods and goddesses that offer them religion, secular incentives, rationalize their audacity, and normalize their human sacrifices not limited to reproductive rites.

Remember this is from someone of the same crowd that scoffs at and belittles conservatives who offer “thoughts and prayers” for people who are victims of disaster or tragedy.

OSHA? I believe a stiff fine is in order for someone related to this!

Too bad an American Patriot with an AR-15 and 30 round magazines was not nearby to put this poor Useful Idiot out of his misery.

If that protestor dies, those people should all be be charged with some kind of homicide. The video is very clear.

BLM757….what, there are local chapters now??

A Franchise? There’s probably lots of them. This one already has a domain registered…

It’s obviously the telephone area code. Grab ’em while you can and head ’em off at the pass.

You gotta have a number, so you can tag with it.

Obviously, these people did not study engineering or physics in school nor did they ever do any kind of serious labor where one works with heavy stuff. Add to that the lack of moral character (self-righteousness is a moral failing).

These were the kids in your High School classes who whined “why do I have to know this stuff? I’ll never use it.”

If that guy survives as a blithering vegetable, Biden has found his running mate.

The Black Lives Matter chapter of Portsmouth, VA, vandalized and toppled a Confederate statue.
If I find out who any of them are, I might make a personal visit.

that’s a big “oops!”
talk about reaching out from the grave

I have absolutely no sympathy whatsoever for this person. A lot of schadenfreude, but not one iota of sympathy.

I feel sorry for the Statue.

What is the monument of? Who or what?

It’s a basic monument to all those who died in the Civil War who were from Portsmouth. It has some Confederate memorabilia inside (a time capsule, basically), and statues of different sorts of soldiers/sailors. (It’s not too awful far from where the Monitor vs Merrimack Virginia battle took place.) And it has a list of names of the 1,000 men who died.

What is the monument of? Who or what?

confederate statue putting a black man (I assume) back in chains….ok… ROTFLMAO

Is that injury covered under Obamacare?

Of course. Prescription for aspirin that will take 10 weeks to get filled. It will only be $200 and that will apply to your $250,000 deductible.

Stupidity is a pre-existing condition, so yes.

“If there is something morally courageous to do, you don’t wait 30 days, you do it now,” said James Boyd,

Toppling a statue is morally courageous?
What a freaking low bar they have set for themselves

Actually, totally different qualifications.
To be a line supervisor at McDonalds you need to know the line operations, and have some level of intelligence.
To be the head of a BLM franchise, you only need a bullhorn. Brains are definitely a drawback.

I know, I know, this is a terrible thought, but he is the last of the Civil War casualties, just happens to be about 150 years later.

No, just another Dem Barrack Sucka.

So….Would that make him the last casualty of the Civil War?

Stupid is as stupid does. Get some common sense people.

Too bad it was only one of them!

I have no words to describe how little I care about the health and future well being of this individual. Stupidity has a price.

And the winner of the 2020 Darwin Award goes to…

and lady antebellum now changing their name to lady a.
soon will just be called “a” cause trans people will be pissed at the word lady.

So the left now believe in hopes and prayers. Astounding!

I felt a disturbance in the force that foretold of this ..

House Speaker Nancy Pelosi (D-CA), who on Wednesday demanded the removal of Confederate statues occupying the U.S. Capitol, has remained silent on her father’s role in overseeing the dedication of the Stonewall Jackson and Robert E. Lee Monument while serving as Baltimore’s mayor in 1948.

Too bad the statue didn’t fall on all of these ISIS inspired communist bastards.

Yes, I will pray for this poor soul, and that the Holy Spirit will bring comfort to him and to his family. We are all victims of our folly; his was merely more sudden and dramatic.

I will also pray that those surrounding him, those who were aiding him, that they too may realize the follies of passion: that anger and lusts and violence of of the body which is here today, and worms tomorrow; while love and patience and tolerance of of the Spirit and will endure.

And now I request that they pray for me, too.

It’s all fun and games until somebody loses a Civil War.

You gotta have a number, so you can tag with it.

If this fool was part of the riot intent upon taking down the statue, we pray that one less Useful Idiot will soon pollute the United States of America when he “checks out” permanently.