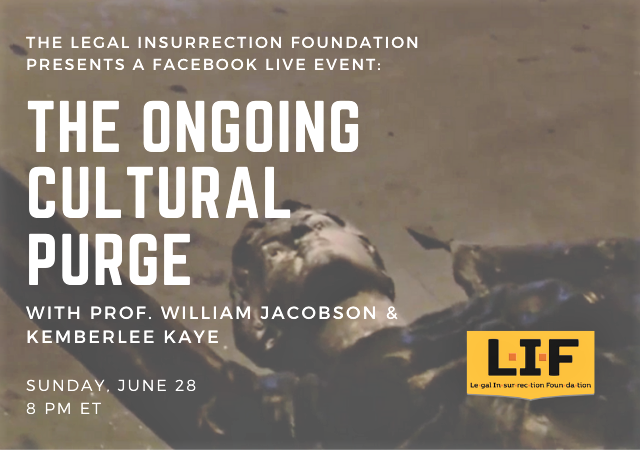 Join us live as Professor Jacobson and I discuss the ongoing cultural purge.

You can watch here live or tune into our Facebook page, where we will be broadcasting and answering questions live. It takes a few minutes after we’ve started broadcasting to get the feed embedded into this post, so please give us a few minutes to do so. If you do no want to participate live, we will upload the video to YouTube and then embed in this post following the discussion.

We look forward to taking your questions!

All set here. I avoid Facebook as much as possible.
By the way, potential new Twitter competitor is Parler.com.

Facebook will allow a following to build up, the censor LI, leaving followers in the dark.

Go on a platform where that won’t happen.

Why leave? Make them censor LI.

My only question for the Professor is “What are you going to do about it?” I realize that you may not want to reveal that publicly.

OK–It looks like I have to let Facebook invade my computer to listen. Sorry to miss this.

.
Thanks for the fine session, Kemberlee and Professor!

I have a question for both of you.
Some years ago… actually decades…Dinesh D’Sousa wrote a book called Illiberal Education. One point he made was that radicals from the 1960’s had moved into university faculties and radicalized education. That was then… obviously he nailed it. But even if he was 100% right, he was only 50% right because all the radicals didn’t go into education. Some became “Journalists” and now, as their counterparts are University administrators and deans many are now producers and editors. It has been said that the most corrupt power of the media is the power to suppress and we see that as well (you posted Larry Elders Ferguson talk this week and it’s a perfect example). So fine…we fight the universities…but we also have to face the media and its narratives. How?

Remember: the left has BILLIONS behind it, thanks to soros, bezos, gates and the like – not to mention NPR, PBS and the money obama, biden, pelosi, clinton, kerry and their families have looted from the US treasury and distributed.

Sorry I was late with my question… I was struggling with my internet.

You mentioned George Floyd in your program.

Pelosi is who called the guy by the wrong name.

So did Schumer, I wrote about it yesterday.

Suggestion: to help in the pacing, have a co-host.

As Blaise MacLean writes, this is building upon what happened in the universities during the 1960’s.

Thank you Professor and Leslie – I really enjoyed the Professor’s remarks. Do you have any idea on how many listened in?

Professor – you mentioned how the revolutionary actions we see today are following a pattern seen on other revolutions in the past, based on your study of history. You also mentioned perhaps offering some type of education. I think a class or a brief overview of past revolutions would help give historical context to what we are experiencing now.

A personal anecdote: I went to school in the 60’s and majored in German. All of my seven teachers were born in Europe and lived through WWII as teenagers. What you said about not tolerating any dissent – I remember my classmates giving Herr Gresak from Poland a hard time for being in the Hitler Youth. He sadly shook his head and quietly, yet emphatically, said,”You don’t understand. We HAD NO CHOICE.”

Great video- I couldn’t make it live, but listened after the fact.
So on the academia point:

This is a dynamic like “there’s no women on computer science.” I don’t think it’s as purgey as you might think. The fact is, most conservatives don’t try to get INTO academia, except in useful areas like medicine or the sciences. I’ve found the teachers in the soft areas to be losers at life in general; that’s not the path for a conservative. The purgey politics is a result, not the cause.

That said- conservatives need to stop surrendering. I’m sick of parents pulling their kids out of schools to home school because they don’t like the liberal content. BS – stand and fight. Suck oxygen out of the room when that happens. When you leave, you abandon the few teachers who are sane- only to let them get eaten by the mob.

The reason whey Seattle and Portland will get worse before they get better (if ever) is sane people are going to leave these hell holes. Real estate in the surrounding areas like Pierce, Snohomish and even Thurston have been going up this past year while King (Seattle) has gone down. People are leaving. Landlords are selling. They’re done. The lunatics will run the asylum when this happens. Who is left to vote there except the nuts?