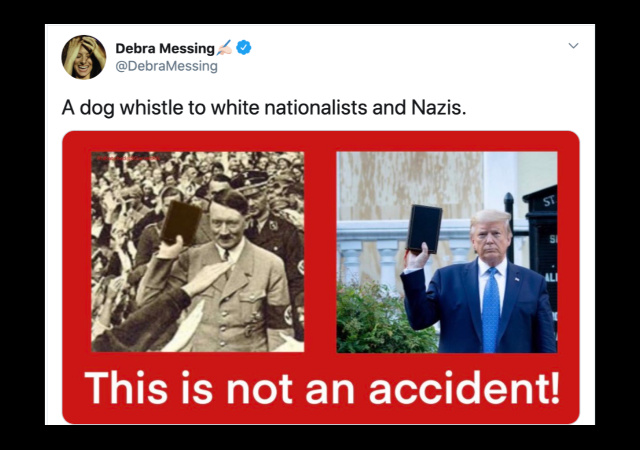 I already covered one fake photo today. Now the left claim President Donald Trump held a Bible yesterday as Hitler did during his reign of terror.

It was photoshopped. Why would people fall for this? Hitler hated religion.

A dog whistle to white nationalists and Nazis. pic.twitter.com/FXnOGlkwjc

Craig Silverman at BuzzFeed made sure to correct Messing and everyone else.

A lot of people are sharing an image that appears to show Trump and Hitler holding a bible in the same way. The Trump pic is from June 1, but the Hitler pic was photoshopped to add the bible. pic.twitter.com/hmaxYfXCxt

It’s too perfect not to share extensively, especially against a president who has used so many lies and manipulated facts against us. And the sentiment is undoubtedly true.

But it’s so apt. Trump’s appearance every day is phony too.

Fake or not, trumps similarities to him are still there. He’s a modern day Hitler and he’s only going to get more and more disturbing the closer to election you get

Oh but it so fits.

The Bible holding is fake. But they are the same people. And their followers are the same too. pic.twitter.com/UlnSqf3Thc

Hun, I can make a mean showing you holing something too. Something I suspect wouldn’t make your father happy.

This is a trope known as ‘Hitler ate sugar’.

Where they find something benign that Hitler did, and breathlessly announce how their current target is doing it too.

Just because Hitler did it doesn’t mean that nobody is allow to do it again, ever.

In this case they can’t even find an actual picture so they have to fake one.

Well, Hitler was a vegetarian, sooo ….

He actually wasn’t. He ate less meat than many people did at the time, and called on people to reduce their meat intake, but he definitely did eat a fair amount of it.

notamemberofanyorganizedpolicital in reply to Olinser. | June 2, 2020 at 5:52 pm

hitler shit. so anyone that also shits is a little shitler.
guess we are all shitlers.

the proper past tense of that word is “shat”

Everything that Hollywood posts about Trump/Hitler should have a header that says REE.

It has always been interesting to watch leftists’ reactions when explaining to them that Adolf despised Christianity – and had considerable praise for Islam.

The closer we get to the election,the more rabid these people will become. Buckle up everybody. It’s gonna be one hell of a ride.

The leftilibrals are demanding to be lied to. And in their usual fashion they project their addiction to disinformation onto the other side.

Hitler was a man of science so that was probably a book explaining the science that linked Jews to a sub-species of apes.

This may seem like an inconsequential point, but it irritates me to see the word “Bible” with a lower case B. I don’t have the time to research, but I’d love to know if other religions’ holy books are treated the same.

I refuse to cede any ground to those trying to control thought by controlling language.

It says it right on the image in the original tweet. This is not an accident. This is a purposeful lie sent out to be reposted by useful idiots, of which Debra Messing is a prime example.

We’re dealing with people who style themselves “anti-fascist” and “anti-Nazi,” who don’t even know who the fascists and Nazis were nor what they did, nor how they gained power. Is should be little wonder they are incapable of recognizing how fascist and Nazi-like they are, when they don’t know the meaning of the terms.

Here I sit in Silicon Valley, with well educated friends from my church who swallow this stuff hook, line and sinker. There is no talking to them. None so blind as they who will not see.

We are living in the Weimar Replublic (thanks, bush I and II). +

The only problem for the swamp/left/lslamic fascists is that PDJT is not Kaiser Wilhelm.

Trump’s visit was also a message to John Roberts and the rest of the court who decided that churches weren’t allowed to open.
To bad nobody in the media wants to speak about that as well.

The irony of the Dhimmi-crats’ ceaseless comparisons of Trump to Hitler and the Nazis is that these same contemporary Dhimmi-crats don’t gave a damn about Jews in the U.S., or, anywhere else, for that matter. That’s been demonstrated rather thoroughly, with the Dhimmis’ wholesale whitewashing/rationalizing/excusing of Islam’s pathologies, its adoption of jihadist anti-Israel venom and propaganda, and, the Party’s inability to unequivocally condemn Jew hatred within its own ranks.

The Dhimmis’ fallacious and flippant invoking of Hitler is offensive to every person who actually suffered under his regime.

“Fake or not, trumps similarities to him are still there. He’s a modern day Hitler and he’s only going to get more and more disturbing the closer to election you get”

So, in spite of every single one of their DJT/Hitler analogies being false, DJT is still similar to Hitler.

I guess it’s a case of most of their similarities being different.

For Leftists to compare Trump to Hitler is silly. Hitler despised Christianity except for when it was useful, as does the Left, and liked Islam, as does the Left. Frankly national Socialism has more in common with the Left than with Trump. Then again both the Left and the Nazis preferred propagandalies so …

If you hear dog whistles then you’re the dog.

God, I loathe the left.

I could care less about the Hitler stuff … but that little Bible stunt pulled by Trump is about as pandering and disingenuous as you can get.

What “little Bible stunt” are you referencing?

Holding up a Bible at a church bothering you?

Seek help for your TDS.

Evangelicals helped elect Trump. They agreed to support him, and he agreed to look out for their interests. It’s not pandering. It’s keeping up his end of the bargain. He still needs them to get reelected. A deal is a deal.

Only idiots say “I could care less” when they mean “I could not care less.” C’mon man, it’s the exact opposite.

I could care less about what you said, but I won’t.

The point stands??? Two of these in a row now.

Post a picture (that happens to be fake) and the point is some fake and weak symbolic comparison using the picture. If the picture is the point, how can a point stand when the picture is debunked? Fake news is becoming a more obvious crowd sourcing effort in the TDS sanitarium.

How is it that Deborah Messing became so knowledgeable about the dog whistles and inner thoughts of the neo-Nazi ideology that she considers herself able to exert expert opinion?

This is ludicrous. Tomorrow there will be a dozen or more photos unearthed showing civil rights leaders, d politicians etc holding a bible in the same manner. Will MS Messing then append their photos juxtaposed with Hitler and declare them guilty of neo-Nazi ideology dog whistles as well?

She may have answered a whistle or two in her time.