According to the BBC, ‘Largely Peaceful’ Protests Left 27 Officers Injured

According to the BBC, ‘Largely Peaceful’ Protests Left 27 Officers Injured

One officer on a horse has horrible injuries after she hit a traffic light because the horse got spooked since someone hit it with a brick. 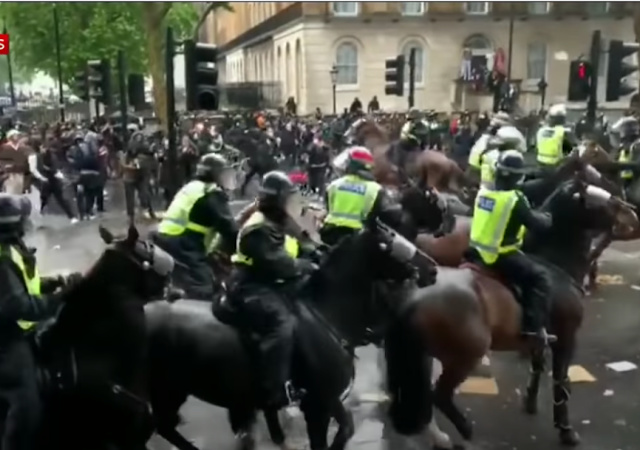 We all know the MSM is trying so hard to downplay the riots, insisting everything is a peaceful protest.

Even with the evidence, the BBC tried to downplay riots leaving 27 police officers injured.

Just in case they delete it: 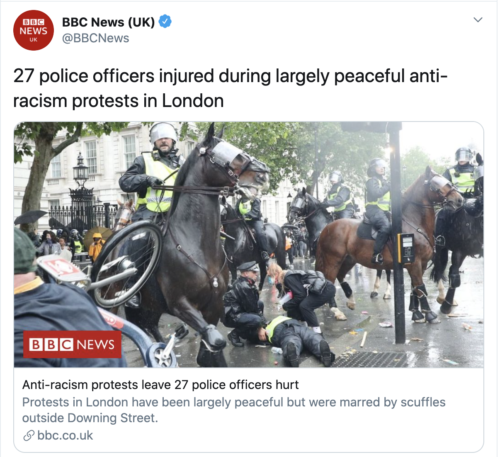 Hey, everyone! Everything is peaceful around here! Only 27 officers were injured!

How about this? “Peaceful protestors” attacking a police horse.

What kind of person do you have to be to think the way to end police violence in the USA is to throw a bike at a police horse in London?pic.twitter.com/iQLGF1aXzb

Another officer got injured after her horse went wild because “peaceful protestors” threw bricks at the animal.

A female police officer has been seriously injured in London after rioters threw bricks at her horse, spooking it and sending her head-first into a traffic pole. pic.twitter.com/fYIA3BIOhm

In yesterday’s London riots a policewoman’s horse was hit by a brick thrown by a ‘protestor’. The horse bolted and the policewoman was thrown. She has a shattered shoulder, cracked ribs and punctured lung. 13 other policemen were injured. Obviously NO lives matter to some people. pic.twitter.com/Yota6GA7go

A police horse bolted when an officer was thrown off as anti-racism protests in London briefly turned violent.

Tens of thousands of people have gathered for #BlackLivesMatter protests across the UK sparked by the death of #GeorgeFloyd.

Those protests don’t look all that peaceful.

Neither did the burning cities and rioting and looting.

How can you have 27 officers injured in a peaceful protest? I doubt it came from shaving or stubbing their toes.

BBC is a Terrorist organization.

Race and crime in the United Kingdom:
% of population 2.7
% of prison population 13.7

In other words, UK black crime rate is sky high, just like it is in America.

“The black population of London in 2010 was just over 12%, yet black males were responsible for 54% of street crimes and 59% of gun crimes.”

The presence of independent media and the Internet have forced the MSM/DNC axis to deploy the “mostly peaceful” Orwellian canard when violence inevitable erupts. For anyone with two brain cells to rub together it flops badly.

Contrast the Brownshirt violence of Antifa and BLM with the recent 100% peaceful protest by gun owners in Virginia. The MSM/DNC axis uniformly portrayed that event as an blood-soaked AmeriKKKan Kristallnacht.

How are these riots different than a war zone or battlefield? Other than MSM labels I mean?

Is the horse ok?
I care more about the animal.
Who is their right mind would ride a horse into a crowd throwing bricks?

notamemberofanyorganizedpolicital in reply to Hotep.Maqqebet. | June 8, 2020 at 12:21 pm

Who in their right mind would be throwing bricks?

alaskabob in reply to notamemberofanyorganizedpolicital. | June 9, 2020 at 2:44 am

Too bad the police aren’t allowed sabers. Crowd clearing would be far more efficient and would cut(!) down on repeat offenders.

Break out the Lipizzaners.

Time for the ‘targeting’ to turn the other way.

What are they going to do when they start getting hammered back – riot?

notamemberofanyorganizedpolicital in reply to 2smartforlibs. | June 8, 2020 at 3:35 pm

Except it yellows overnight and in the sun.

“Except for that most unfortunate assassination of the President, Ford Theater’s production of ‘Our American Cousin’ opened to highly acclaimed reviews.”

“Other than the assassination, Mrs Lincoln, how was the play?”

Today’s BBC ain’t your daddy or grandaddy’s BBC. It’s been progressive left of center for years.

If you watched any of their kid’s shows you’d think the UK was 90% black or Mooslime.

Break out the Lipizzaner stallions.

Excellent video about the riots (I refuse to call this a protest) over in the U.K.

I should add: somewhat NSFW due to some swearing. I can understand why he is, he loves his country and is understandably upset by what has happened.