DOJ: “the executive orders appear to reach far beyond the scope of the 30-day emergency authority granted to the Governor under Illinois law,” and should be decided in state court, after Governor Pritzker removed the case to federal court at the last minute to avoid a state court ruling. 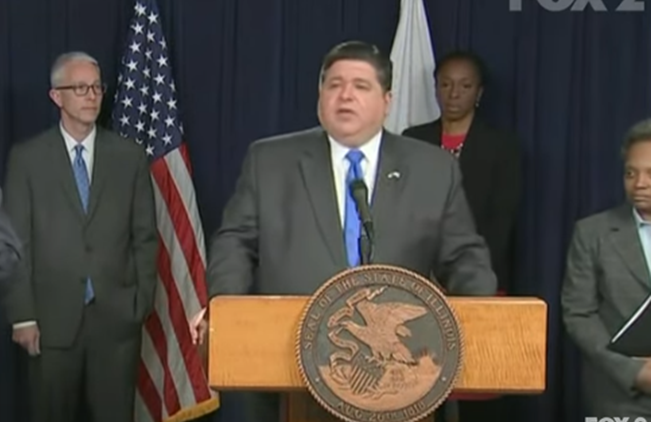 There is mounting litigation against state lockdown orders, in some cases based on constitutional violations, in other situations based on claims the state officials lacked or exceeded statutory or regulatory authority.

In a religious liberty case in Mississippi, the U.S. Department of Justice filed a Statement of Interest in support of a lawsuit challenging restrictions on drive-in religious services that were not applied to secular gatherings at liquor stores and fast food restaurants. The case settled with the City of Greenville treating religious gathering the same as other gatherings. A similar case in Kentucky ended up with an injunction granted the church.

Now DOJ has filed a Statement of Interest in an Illinois case challenging more general restrictions imposed by Governor J.B. Pritzker. The DOJ position is that the Governor’s last minute removal of the case from state to federal court, on the eve of a decision in state court, was improper. You can read the state court pleadings and motion papers here.

From the DOJ press release:

In response to the COVID-19 pandemic, the Governor of Illinois has, over the past two months, sought to rely on authority under the Illinois Emergency Management Agency Act to impose sweeping limitations on nearly all aspects of life for citizens of Illinois, significantly impairing in some instances their ability to maintain their economic livelihoods.  According to the lawsuit, the Governor’s actions are not authorized by state law, as they extend beyond the 30-day time period imposed by the Illinois legislature for the Governor’s exercise of emergency powers granted under the Act.

“However well-intentioned they may be, the executive orders appear to reach far beyond the scope of the 30-day emergency authority granted to the Governor under Illinois law,” said Steven D. Weinhoeft, the U.S. Attorney for the Southern District of Illinois.  “Even during times of crisis, executive actions undertaken in the name of public safety must be lawful.  And while the people of Illinois must be physically protected from the effects of this public health crisis, including by complying with CDC guidelines their constitutionally guaranteed rights and liberties must be safeguarded as well.”

In its statement of interest, the United States explains that this dispute belongs in Illinois state court, and that Representative Bailey has raised substantial questions as to whether the Governor’s current response to COVID-19 is lawful.  Although the complaint does not raise any federal constitutional claims, the statement explains, “It is up to the Illinois courts to rule on Plaintiff’s claims, which, because of the sweeping nature of the Orders, may affect millions of lives and raise significant constitutional concerns in other litigation.”

DOJ’s involvement is helpful, but the more important aspect of the case is how the Governor feared a negative state court decision so he pulled the case, likely improperly, up to federal court at the last minute.

An Emergency Motion to Remand the case back to state court has been filed. But it will be at least until next week, maybe longer, before there is a decision. Even if the case gets sent back down to state court, Pritzker bought himself some more time to lockdown the state — possibly illegally — through this procedural maneuvering.

If the goal is to ruin the state’s economy in an attempt to make PDJT look bad, any delay serves the same purpose. The leisurely time constant customary in legal proceedings is, in this case, death. So a bit of hurry-up would definitely be in order.

I think he’s extending the economic pain so he can justify mooching as much as possible from the feds when the time comes for states to receive compensation.

The entire DEMpanic has been a fraud, from the get-go!

I hope Senate Republicans remember the vile lies that our beloved IL Democrats have been spewing against PDJT when they decide on compensation levels due the states. I live here and will be completely disappointed if they give in and pay anything toward our obscene state pension shortfalls. Make the Dems fix their own mess, there’s no point in trying to curry favor or work with them because they are rabid partisan dogs and will bite when the treats are gone. So don’t even start with treats. Bow-wow.

Have you seen this then?

They were inseparable, married for 70 years but the nursing home lockdown kept them apart.

They held hands, cried, hugged and kissed.
“Oh honey I’m so happy to see you!” Jean said to Walter.

Who Believes the Lockdowns Were About Science?
Genuine epidemiologists questioned the economic interruptions from the beginning.

stpaulchuck in reply to notamemberofanyorganizedpolicital. | May 23, 2020 at 3:28 am

science (and medicine) require you to protect the patently vulnerable. In this case sequestering them (voluntarily) in protected places. All the while leaving the rest of us to carry on.

Oh yeah, and when did flattening the curve turn into ‘no one moves until we have a 100% effective vaccine and 100% have taken it’?

Not a dime to this prick.

You hit the nail on the head, as much damage as possible for a bailout. Pritzker and Larry Lightfoot’s plan from the beginning. “Never let a crisis go to waste” Deadfish Rahm 🙂

Maybe, but I am starting to have doubts. This is shaping up to be a media battle between Trump (who wants to restart the economy) and Democrats (who want to keep it shuttered). I don’t think “Keep It Closed” is the economic/political hill Democrats wanted to be seen passionately defending in an election year with tens of millions unemployed and faith in “experts” decreasing daily, but here we are.

The problem for Democrats is that Trump is not reacting the same way a Bush, Dole, McCain or Romneycare would have reacted – with bowing and scraping before the Holy God of Bipartisanship while going fetal in the glare of media ridicule. This has made Democrats double down (again and again) on deliberately causing economic calamity. I am beginning to doubt that the billions of dollars of campaign donations Democrats get for free every election will buy enough voter amnesia between now and November. But time will tell.

It’s OUR job to keep this in front of the short attention span types at election time.

Great news. Gaulieter Pritzker has been too comfortable playing dictator. He think because Illinois is now virtually a one party state and the state courts are packed with lefties he can get away with anything. Pritzker inherited billions. He is totally out of touch with what ordinary people who have lost jobs and their businesses are going through.

Fun fact — Illinois has about the same deaths per million stat as Sweden. That would be the Sweden that has not had a lockdown. Instead the Swedish government laid out the risks, made some recommendations, and treated the population like adults.

Maybe the Swedes voted like adults and didn’t elect a pritzker?

On what legal basis did Pritzker remove the case to federal court? Aren’t these state law issues over which a federal judge would have no jurisdiction?

I’m surprised I would have thought the dems would have a better lock on the state courts, you mean there might be an honest judge at the state level.

He’s doing the Urkel move, “Oh gee, did I do that?” When he gets chastised he’ll be all apologetic and keep kicking the can down the road as long as he can.

The negative consequences of large-scale quarantine are so extreme (forced confinement of sick people with the well; complete restriction of movement of large populations; difficulty in getting critical supplies, medicines, and food to people inside the quarantine zone) that this mitigation measure should be eliminated from serious consideration.” ~Johns Hopkins Center for Health Security, Nov. 4, 2006

Total fascism. They’re not even hiding it anymore.

New York voters: you deserve all the misery you’re getting for electing this maniac.

P.S.- Don’t come looking to the rest of us for money.

Michigan voters: you deserve all the misery you’re getting for electing this maniac.

Keeping America Skeered
That’s what the Democrats want, from now until Election Day.

Democrats and their media appendage are fully invested in keeping America in a state of fear and hopelessness.

They have done an excellent job of scaring and stampeding the nation into submission. It is that fear that has made Americans willing to imprison themselves and meekly accept the wanton and needless destruction of their jobs, lives, and livelihoods. As long as they can be kept cowed and believing that their only salvation lies in locking down the economy, the destruction can continue unabated. The progressive narrative is that America’s only realistic and responsible public health option is to shelter in place even as joblessness mounts and the economy draws nearer to total collapse. Any ray of hope or notion that there is a safe, effective alternative to this utter economic destruction has been and will continue to be hidden, obfuscated, and distorted.

It is imperative that the public be kept scared and in submission for as long as possible so that the wrecked economy will still be an issue come November, when an orchestrated attempt will be made to blame President Trump for it.

In pursuing this strategy, the Democrats and the media are following to the letter the guidance of that great slave-trading Democrat of yesteryear and founder of the Ku Klux Klan, Confederate General Nathan Bedford Forrest, to get Americans “skeered and keep the skeer on ’em” all the way to election day.

There are now two choices for Planned Pathogen (PP): the HCQ+AZ cocktail and the day after Ivermectin pill. They just need to trace the immigration, migration, sanitation, business or pleasure transmission vector of SARS-CoV-2 to nursing homes, churches, hospitals, and communities.

Planned Pathogen (PP) not to be confused with Planned Parenthood (PP), an “essential service”, where the latter is responsible for nearly a million excess deaths (i.e. reproductive rites) and clinical cannibalism, including: parts for profit (PP) annually in America alone.

The left has a short memory. It wasn’t that long ago Wingamn attacked AZ for mirroring US immigration law and it was a sore spot the rest of Jan Brewer time in office

Yeah, unfortunately for Pritzker and some other Governors, they could very well find themselves back in Federal court where they will need to defend themselves against violations of curtailing religious exercise under color of law by refusing to tailor their orders narrowly and in the least restrictive manner.

Consent decrees forthcoming with Federal oversight? Not terribly likely but not impossible.