“I’m just saying, we fly over those states that voted for a racist tangerine for a reason.” 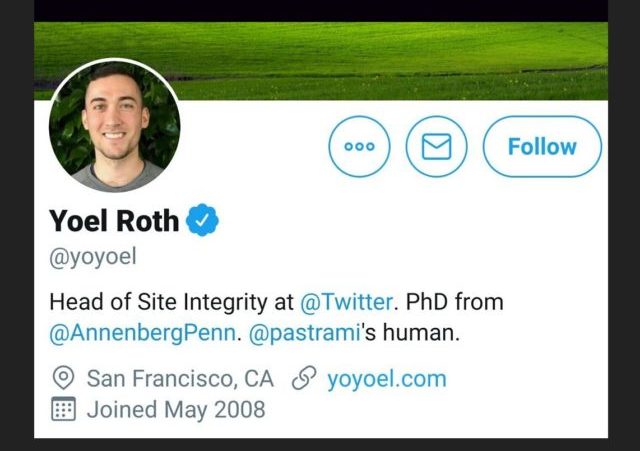 Twitter’s Head of Site Integrity Yoel Roth is in charge of “developing and enforcing rules,” which means he likely had a say in fact-checking President Donald Trump’s tweets about mail-in ballots.

But can we truth Roth to enforce these rules across the board? He has a long history of attacking Trump and other Republicans.

Look, I love free speech. Roth can say whatever he wants, but until I see Twitter actually go after the left like it does the right, I don’t trust him or anyone else there.

I mean, Roth doesn’t hold back.

This person is the “head of site integrity” at Twitter pic.twitter.com/hyZcl5VIe0

Yes, that person in the pink hat is clearly a bigger threat to your brand of feminism than ACTUAL NAZIS IN THE WHITE HOUSE.

I’m just saying, we fly over those states that voted for a racist tangerine for a reason.

I’ve never donated to a presidential campaign before, but I just gave $100 to Hillary for America. We can’t fuck around anymore.

I’m almost ready to stop dwelling on how my friends are complicit in the election of Donald Trump. Almost. https://t.co/06x7brT6Vn

However, some experts have said that mail-in ballots is “an invitation to widespread fraud.”

One such study came in 2005 from the Commission on Federal Election Reform. Here’s a surprise! President Jimmy carter chaired that commission.

Yes. Hold that thought. Don’t do business with Twitter. If you go to a whorehouse would you be shocked and surprised to find it full of whores?

“Twitter’s Head of Site Integrity Yoel Roth is in charge of “developing and enforcing rules,” which means he likely had a say…”

are you sure you’re using the correct personal pronoun here? The Twitter Diversity Police want to know.

Labeling this snot nosed punk an executive is a travesty.

Wonder what he does with that ‘human pastrami’ . . .

Propaganda even Paul Joseph Gobbles would be proud of. However, that is an in-kind contribution to the DNC and needs to be reported to the FEC.

I was permanently removed from Twitter because I Tweeted to my congressman that the exemption social media has to the communication act allowing them to be a network like your telephone company. social media said, oh, we won’t censor comments. A lie. Blocking threats and foul language should be censored, even the phone company can do that, but kicking me out of Twitter with no appeal is, IMO, illegal.

I don’t get why you were blocked for that, but you’re wrong about the law. The phone company can’t block threats or foul language or anything else. Congress created the category of Interactive Computer Service specifically to allow them to block anything they find offensive, without becoming liable for everything they don’t block.

The correct analogy is to a book store, which is free to refuse to carry certain books, and can do so on a completely partisan basis, but is still not responsible for what’s in the books it didn’t reject. If that weren’t so, book store owners would have to read each book before carrying it, and the shelves would be a lot emptier.

Twitter blocked my account within five minutes of opening it, but I think it was for not having a cell phone number.

An effect of robots in charge.

His name sounds jew. He should know better than calling Trump a nazi.

I doubt he has taken a real history class in his entire life.

Even for Twitter, employing a man with his head so screwed up is surprising. Seems that the pro BDS anti-Israeli Nazis will have an ally on Twitter with Mr. Roth.

Not to mention that people have been prosecuted, here in Texas, in the recent past for vote fraud involving absentee ballots. Years ago it used to be a fun Socialist-Democrat pass time to go to Nursing Homes and apply for, complete, collect (actually that was collect and complete) and turn in absentee ballots from the patients. It was more widespread, and lucrative in votes cast, than Johnson’s graveyard voting scheme.

The problem with vote fraud prosecutions is the prosecutors treat the offender as a lone wolf. They never seem to search for more such offenders, of which I am sure there are many, probably related to the one they’re prosecuting, and no election that I know of has ever been reversed or redone as a result of such a prosecution. Therefore there is little reason not to engage in vote fraud since the final result is never overturned even if a few take one for the team.

As with many crimes that obviously involve a group and conspiracy, prosecutors prefer to only go for the easiest participant. Otherwise they risk getting in over their heads or expending too much money. Not to mention that it risks rolling up “important” people.

Note that I refrain from mentioning the possibility that some might find themselves calling in fire on their own position. Prosecutors are elected, after all.

On the contrary, the biggest problem is genuine lone wolves. Those are the hardest to catch. And each one can only have a small impact, but when hundreds of them operate independently the cumulative effect can be significant.

But yes, when they do catch someone they should at least inquire into the possibility that he had accomplices. I don’t know whether they do so.

The paucity of multiple-offender prosecutions for vote fraud leads me to believe that prosecutors don’t in fact look into possible accomplices. And by “accomplice”, I don’t mean that in a formal legal sense. I consider a group of people, working for a common cause, accomplices even if they don’t know each other and aren’t under common direction. I consider the latter vanishingly unlikely in modern vote fraud schemes. Heck, it’s best if they don’t know each other if they do have common direction, from the point of view of the director.

When your “Tegridy Czar” has none, that’s all we need to know.

Kill the H1-B visa. Make all the staff American.

Then this fellow would be an outlier, and jack dorsey would have his hands so full with dealing with American employees, he wouldn’t have time for this horse crap. Better yet, he’d make less money.

On the contrary, foreigners tend not to care about our elections. Citizens do, and are thus more likely to manipulate them.

That’s absurd. Elections very much matter to foreigners. How many illegals from Mexico and parts south would be flooding California if, instead of Newsom promising handouts, an immigration hardliner was governor of that state?

This policy of ‘fact checking’ isn’t going to play out the way some hope.

1. Big MSM hoopla as PDJT gets fact check naughty from Twitter
2. So, the next PDJT tweet that doesn’t receive naughty is then an endorsement by Twitter as to the truthfulness?

3. The head fact guy is already revealed as a partisan progressive, any takers for bet that his staff are as well?

Twitter would be smarter to try and police the low hanging fruit: perhaps anything in the realm of ‘fighting words’; they could easily list objectionable words and hammer folks for it

Policy differences are a bit too much to tackle. Demonstrated by the failure to accurately represent the flaws in mail out,mail in voting. This is distinctly different from traditional absentee voting.

The same thing happened last week on the Gaming App TWITCH. A Transgender Deer Furry, FerociouslySteph, said almost the same things and warned “I have to power now to ban you white supremacists.” Amazing, fascist have to fascist.

This pajama boy would melt in the face of actual Nazis. Go back to your mother’s basement.

It’s beyond sad how brainwashed this guy is: it’s downright dangerous.

There is an army of these lunatics trying to destroy the nation.

Until we take back our educational system, forget all hope.

Take a lok at Roth’s CV:

Until we take back our educational system, forget about our future.