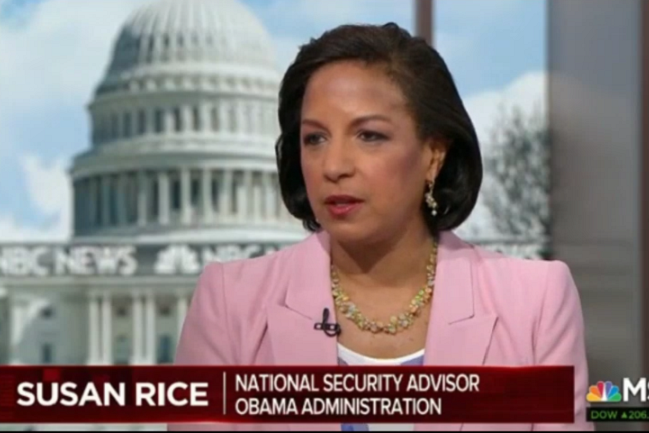 Susan Rice, who served as National Security Adviser for the Obama administration is apparently on the list of potential running mates for Joe Biden. When asked if she would take the job, she said yes.

Former national security advisor Susan Rice Thursday said she “certainly would say yes” if former Vice President Joe Biden asked her to be his running mate in the presidential election.

“I’m humbled and honored to be among the extremely accomplished women who are reportedly being considered in that regard,” Rice told PBS.

Biden is listed on a memo declassified this week by acting Director of National Intelligence Richard Grenell of former Obama administration officials who may have seen documents related to the “unmasking” of former Trump national security adviser Michael Flynn.

While Rice isn’t on the list, she has admitted to making unmasking requests during her time as national security adviser.

.@AmbassadorRice is “humbled and honored” she’s reportedly a Biden VP contender.@MargaretHoover: Would you say yes if he asked you?
Rice: I certainly would say yes.

Rice: …if that were the role in which he felt I could best serve, then I’m not going to say no. pic.twitter.com/zSG15gL9Mx

Rice would check some of the right boxes for Biden. She is a woman of color and has foreign policy experience.

Like Biden however, she is part of the unmasking scandal currently unfolding.

Rice is also on the list of former Obama administration officials released by acting Director of National Intelligence Richard Grenell who Grenell says asked for documents that led to the “unmasking” of former national security adviser Michael Flynn, revealing his identity in intelligence reports between the 2016 election and President Trump’s inauguration.

Of course, the biggest strike against Rice is the central role she played in blaming the 2012 terror attack in Benghazi on a YouTube video.

This was a lie, and everyone knows it.

now, apparently, they try to exceed it.

Isn’t this the lying whore that repeatedly went on national television to gaslight the world about Obama and Clinton’s Benghazi debacle? If this scumbag had an ounce of shame she’d be hiding under a rock somewhere for the rest of her life.

If she had an ounce of shame…
If she had an ounce of shame she wouldn’t, couldn’t be a Democrat.
People who believe know one day there will be an accounting for everything they have said or not said, done and didn’t do. My hope is when my turn comes I hope I’ll get a “Well done, good and faithful servant.”
These Democrats seem to be believe the only sin that counts is getting caught.

One of the lying whores who … etc.

I would put her at the top of the list.
.
First, the media controls the narrative and they didn’t care about Benghazi in 2012 and they don’t now. They’ve already written of the unmaskings and in her role she has every right to unmask (Samantha Powers and Biden, not so much). She’s not a politician so she has no other record of voting to attack.
.
Second, she won’t show up Biden because she’s soft spoken like Pence is to Trump.
.
Third, she’s got the minority and woman vote which Biden desperately needs.
.
Last, she was probably a demand by Obama that’s why she’s being floated out of left field. Either way, she comes with Obama’s money, Obama’s machine, Obama’s people and Obama’s mailing and email list.
.
I guess one more – All the other prospects are just plain bad choices. People hate politicians with a passion and Rice is not a politician.

How is Dirty Rice going to do that from inside a jail cell?

Pasadena Phil in reply to notamemberofanyorganizedpolicital. | May 16, 2020 at 2:10 pm

Wouldn’t she be immune from prosecution as a presidential candidate? Maybe they plan to run Joe with 50 co-VPs?

Another black female NSA named Rice who was touted as a VP candidate more than once, but in her case made it clear she wasn’t interested? Condi.

So have Susan Rice as the VP candidate and perhaps even the VP and you have outdone Condi too.

A plagiarist and a liar. Awesome combo. The sad thing is they are guaranteed to get at least 45% of the vote by default.

It appears that one can scrape even lower than the bottom of the barrel.

Remember when the obama administration (fbi) destroyed General David Petraeus? Then let hillary off the hook for far more serious violations? The lawless of obama and his fellow criminals is coming to light.

If there was a medication or some therapy that could improve Joes mind, they would have used it by now. I don’t believe that they intend for him to actually hold office.

well, to be fair, there isn’t much you can do to treat tertiary syphilis… 😎

She’s up to her eyeballs in the unmasking scandals. But I doubt she gets outed by the media for it.

So we get to hear its just a video every time you people screw up again? TRUMP 2020

So she thinks she’s an “extremely accomplished woman.”

If I were interviewing her, my next question would be:

“How are you more qualified than other extremely accomplished women, such as Stacy Abrams and Dr. Rachel Levine?”

If Creepy Joe is seriosly conmsidering Rice it’s because all of the other available black women have way too much baggage and too many skeletons in the closet. See Kamala ‘Kneepads’ Harris, for example.

Which tells you a lot considering how much baggage Rice has.

Put her in prison.

For a moment, let us pretend to be fair. Let’s consider the list of top Democratic women who could be the VP nominee.

Okay now, pretending for a moment that you’re a Democrat, who do YOU want out of that list? Who wouldn’t have baggage, who wouldn’t be indicted, who would have some name recognition, who would perhaps bring their state to the blue side in November?

Not so easy, huh.

The Democratic campaign for president is like a bad video…;)

But what the heck, there is the possibility that she might not be the best fit for Slow Joe. Joe is a liar–but not an extremely accomplished one, and the Veep should never show up the boss.

Sleazy Susan: she didn’t do “nuttin'”!

What a treasonous piece of sh*t.

Calling yourself “extremely accomplished” is oh so humble.

One week after Biden makes his VP pick, one of the losers will re-open her state from the Wuhan Shutdown. It’s the only reason why she is acting all totalitarian.

Not to be cynical, but …

Doesn’t making her the VP candidate let them do the racism / sexism dance to deflect the corruption, collusion, malfeasance n similar arguments? She’s got an immunity and innoculates him?

I have to disagree that “the biggest strike against Rice” was the Benghazi incident. Far worse was her advice, given while 1 MILLION Tutsis in Rawanda were being killed (1994), that we should not call it genocide,”because then people will say ‘why aren’t you doing anything about it?'”

Another example of a black “privileged” Demoncrat who thinks they are “entitled” to any job they want and who have absolutely no job qualifications.