“There’s no hypocrisy here. You respect women, you believe women. They have a right to tell their story.” 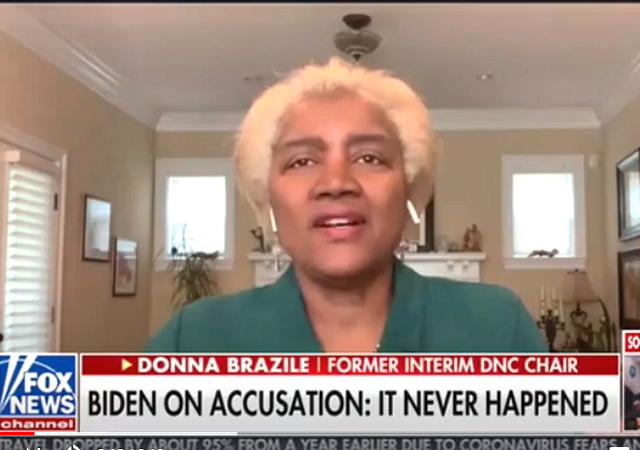 FOX News contributor and former interim chairwoman of the DNC, Donna Brazile, appeared on the The Daily Briefing with Dana Perino on Friday afternoon and was asked about the allegations against Joe Biden.

It was a struggle to reach her answer.

Dana Perino and her other guest, former White House Press Secretary Ari Fleischer, repeatedly asked Brazile if she believes Tara Reade before she finally said that she believes Joe Biden.

Brazile, a Fox News contributor who appeared Friday on the network’s Daily Briefing with Dana Perino, was pushed on her support for Biden amid the allegation that he assaulted former Senate staffer Reade in 1993 when he was a Delaware senator.

“We are talking about women who have come forward to tell their story,” Brazile said. “To make sure that they are heard and respected. That is [why] Joe Biden requested that it be investigated. That she be believed, and that she be heard. I have heard from Tara Reade. I did not hear from Joe Biden. That’s why I was grateful to hear from him today. She has already spoken.”

The actual transcript, provided below by Newsbusters, is painful to read:

DONNA BRAZILE: I have heard from Tara Reade. I have not heard from Joe Biden. That’s why I was grateful to hear from him today. She has already spoken. Maybe not on network TV or cable television, but I’m glad that she will get another opportunity to tell her story —

BRAZILE: What’s important during this, yes, we have heard, she’s been on Democracy TV. [Democracy Now]

FLEISCHER: — Do you believe Tara Reade?

BRAZILE: She’s given interviews, we’ve heard from her, but we respect women. That’s — the bottom line is respect women —

DANA PERINO: Donna, Ari is trying to ask you, Donna, do you believe Tara Reade?

BRAZILE: There’s no hypocrisy here. You respect women, you believe women. They have a right to tell their story.

PERINO: Do you believe Tara Reade?

BRAZILE: I’m sorry. [to dogs] I know you like Dana Perino, but you have to stop that, I’m on Fox.

PERINO: Donna, I don’t want to let you off the hook here.

BRAZILE: I believe that Joe Biden is telling the truth, I also believe that Tara reade who first said it was sexual harassment, and now says it’s sexual assault. I believe she has every opportunity to be respected and to tell her story.

It’s amazing how far Democrats will go, tying themselves in knots, trying to have it both ways on this.

So you have to wonder about all his defenders….

On Believing Biden But Not Kavanaugh:

Not Every Sexual Assault Claim Is ‘Equal’

Washington Examiner
✔
@dcexaminer
“Not every claim [of sexual assault] is equal.”@GovWhitmer says “there’s not a pattern…and I think for these reasons, I’m very comfortable that Joe Biden is who he says he is.”

I UNDERSTAND SHE IS ALSO AGRUING OVER THE MEANING OF THE WORD “IS.”

As always in their world, some are more equal than others

I thought it was Butterball Turkeys……..

slagothar in reply to notamemberofanyorganizedpolicital. | May 3, 2020 at 2:50 pm

“As God as my witness, I thought turkeys could fly”…

UserP in reply to notamemberofanyorganizedpolicital. | May 3, 2020 at 3:34 pm

notamemberofanyorganizedpolicital in reply to UserP. | May 3, 2020 at 8:50 pm

Thanks for the laughs.

IMHO she’s as believable as her hair is natural.

Less so would be a safe bet.

I’m not listening to a cultural appropriator.

Go back and listen to her claims about Kavanaugh.

” I believe that Joe Biden is telling the truth, I also believe …”

Perhaps the interviewer could ask her if she ever read Orwell’s novel “1984” and, if so, if she understands the meaning of “doublethink”?

Or at least ask her to explain why she believes Joe Biden. Is it just doubleplusgood “bellyfeel” (yes, more 1984)? Do you really want to admit to the world that the only “evidence” that matters is the subjective feel of your own gut?

In any case, she’d be on much stronger grounds if she’d said “I believe that Joe Biden is telling his truth, and …” Because y’know there’s his truth and her truth and our truth,s and sometimes it’s just so confusing! Can’t we all just have our own private truths and, umm, Move On Already?

The “Truth” to a Democrat is the narrative. Think Pravda.

Any hypocrisy is OUR problem, not hers.”By any means necessary.” say the Dems. Believe that as it is about the only truth you will ever hear from them.

As far as I can tell, donna brazile has been an incompetent buffoon in every position, job and role she has had since, well, since forever. It’s *almost* as if she checked some identity politics boxes for some influential democrats so they took her on despite her being as dumb as a braindead buffalo. I’m glad the democrats have such upstanding people as debate question donna, or double standard donna as standard bearers.

She is tolerated and kept around as a useful mouthpiece because of her singular skill at never telling the truth and doing so unabashedly in spite of the facts and contradictions flying right in her face.

“an incompetent buffoon in every position”

Affirmative action has a lot of adverse consequences. Even for blacks who never needed AA. Every black comes under the cloud of AA suspicion and all that that means, principally competence. Seriously, if given a choice, you’re gonna choose a black doctor, dentist, CPA, lawyer, and so forth?

What’s scary is is that there are tens of millions of voters who think just like Brazile. #BelieveAllWomen means automatically disbelieve women who make accusations against Democrats.

Just as it wasn’t “rape rape” with Roman Polanski. it’s not “grope grope” with Joe Biden.

Donna Brazile, the patron saint of credibility, has never had an honest moment in her entire career.

Think what you will of Ms Brazile, but please keep your creeping racism at home.

May every libtard be hoisted on their own petard.

We all remember just how honest Donna Brazile is from the 2016 Democratic Primaries. I can’t believe FNC picked her up. Brazile and Marie Harf are quite a pair.

OT but has disqus comments on newsbusters disappeared around 5-1-2020 for people?
tested on multiple browsers as well as pc’s in other physical locations on different isp, source code no longer even has no disqus code in it now.
tweet to NB about it no reply.

That woman is as authentic as her hair..

i guess donna didn’t get the meno. you were supposed to drink the bleach, not dump it on your head!

Aunt Jemima is on the air…

notamemberofanyorganizedpolicital in reply to MAJack. | May 3, 2020 at 8:54 pm

That is Step N Fetch it come back from the grave.

I think that question was asked five or six times. And Donna kept dancing around it.

brazile is simply sucking up to biden like abrams, warren, harris etal. Let’s reverse the situation, suppose a woman was the leading dem Presidential candidate – would a woman take biden as a VP choice with at least 4 sexual misconduct accusations and his dementia?

Did she also provide slow Joe with the answers to Big All’s questions on CNN?

Is Joe Biden faking his on-screen buffoonery to bolster his “I dont’ remember Tara Reade” narrative?

My son who is a “Bernie-Bro” loves the delicious irony of the lies that is the DemDNC establishment. “I told you so,” he repeats over and over. He will NEVER vote for Biden . . .

My wife, who is a pro-business, Democrat, _would_ have been a loyal Biden voter . . . but this is too much. The Gilbrand’s, the MeToo establishment, have lost all credibility with her. She may not vote for Biden now . . .

Well, actually she doesn’t. She KNEW Kavanaugh was telling the truth and she BELIEVES Biden only because he’s a DemocRat. See how this works?

Democrat women seem to love abuse. It is much like the women that proclaim their wife beating mate the love of their life.

I’m trying to slap a happy face on all this. Because the gub’mint says the surgeries I need are elective.

You want to know what is elective? Something that can be scheduled.

Hospital rooms are going empty and they are turning people like me away.