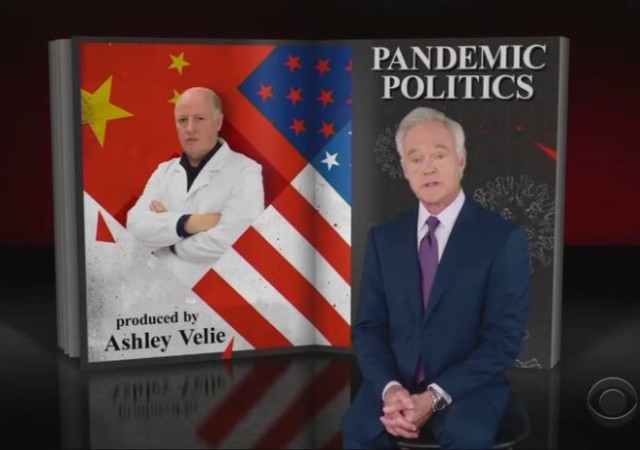 As it turns out, Meet the Press host Chuck Todd was not the only journalist who peddled fake news about high-ranking Trump administration officials on Sunday using a deceptively edited video.

CBS News’s 60 Minutes ran a feature during their Sunday night broadcast that they titled “Pandemic Politics.” It was an error-filled segment, as thoroughly documented by Daily Wire’s Ryan Saavedra. But we’ll focus on a couple of the more glaring issues with their claims, which they emphasized in a tweet on Sunday:

As the U.S. took the lead for illness and death from coronavirus, the White House moved the focus to the Chinese government. Last Sunday, Secretary of State Mike Pompeo attempted to resurrect a debunked theory that the virus was man-made in China. https://t.co/MZbfe4LeXi pic.twitter.com/bIjTRfboTg

Let’s start with the whole “U.S. took the lead for illness and death from coronavirus” claim. It’s misleading at best when you consider the fact that the United States has been far more upfront and honest about their Wuhan Coronavirus case numbers than China ever has been. This is especially true considering that China has revised its definition of what they consider a legitimate case of the virus at least eight different times.

Secretary of State Mike Pompeo came down hard on China in March for its numerous deceptions, which he and other administration officials including Trump have said hampered efforts here in the United States to combat the virus:

Speaking following a virtual meeting of the G7 March 25, U.S. Secretary of State Mike Pompeo slammed the “intentional disinformation campaign that China has been and continues to be engaged in” regarding COVID-19. Pompeo had earlier told CNBC that, “The information that we got at the front end of this thing wasn’t perfect and has led us now to a place where much of the challenge we face today has put us behind the curve.”

It was Pompeo’s remarks he made during an interview with ABC News’s Martha Raddatz earlier this month that 60 Minutes correspondent Scott Pelley used to claim he said the Wuhan Coronavirus was man-made:

PELLEY: As the U.S. led the world in illness and death, the White House moved the focus to the Chinese government.

PELLEY: Last Sunday, Secretary of State Mike Pompeo attempted to resurrect a debunked theory that the virus was manmade in China.

POMPEO: Look, the best experts so far seem to think it was manmade. I have no reason to disbelieve that at this point.

PELLEY: But he did have reason. Days before, the director of national intelligence said there was “wide scientific consensus the virus was not manmade.”

MARTHA RADDATZ [on ABC’s This Week, 05/03/20]: Your Office of the DNI says the consensus, the scientific consensus, was not manmade or genetically modified.

PELLEY: The same day Pompeo tried to have it both ways, President Trump repeated the theory of a Chinese lab accident.

The problem with the way 60 Minutes aired the clip of Pompeo’s interview with Raddatz is that it left out the context and the strong likelihood that Pompeo initially misspoke. Here’s the actual transcript, with follow-up comments by Professor Jacobson:

misspeaking and then immediately having it corrected — within seconds — is not a basis for @60Minutes to say he is claiming it was manmade. He was not claiming it.

If you go back a week, you can see that not even ABC News, which interviewed with Pompeo, claimed he said the virus was “man-made:”

CHINA COVERUP? Secretary of State Mike Pompeo said there's "enormous" signs the outbreak originated from a lab in Wuhan — but stopped short of saying it was man-made — as U.S. intel accuses China of hiding the extent of the epidemic. @DymburtNews reports. https://t.co/v5OEVFksm9 pic.twitter.com/NT7rjogf9B

.@CBSNews intentionally misled its viewers with a report Sunday evening that failed to accurately portray the clear intent of Secretary Pompeo's remarks to Martha Raddatz on ABC News regarding the origin of the virus in Wuhan, China.

60 Minutes on CBS is the second example in 24 hours of completely dishonest editing, this time of @SecPompeo.

CBS cut out the portion of Pompeo's remarks where he clearly acknowledges that he agrees with the intelligence community assessment.

Why it’s almost like 60 Minutes is doing China’s bidding or something:

.@60Minutes sets up a false straw man, that Pompeo and the admin are claiming the virus was manmade in a lab, then knocks down the straw man. But it's a false premise, and allows @CBSNews to distract from Chinese govt perfidy. The CCP thanks you for this. https://t.co/hMrpbUzG5s

This is a lie. I’m getting very tired of watching major news organizations spread claims. Pompeo referenced evidence that it originated at a lab, not that it was man-made. These news organizations have been dishonestly conflating the 2 for months. There is no more exuse for it. https://t.co/NXdeeXxexp

60 minutes and other outlets have basically resorted to spreading propaganda on behalf of China’s regime by framing it this way. A few months ago it was possible to conclude the reporters doing it are just ignorant, but now this is indefensible and deplorable.

This is not what Pompeo claimed. And the belief this walked out of a lab is not partisan, it’s about China’s lax protections. Describing that as conspiratorial is a concession to the CCP.

Sadly, the national media (and Democrats) have more often than not been peddling Chinese propaganda for months now on the Wuhan Coronavirus, so this shouldn’t be a surprise to anyone.

It’s still infuriating as hell, though. Regurgitating China’s talking points simply based on their Orange Man Bad premise is not a good look for the media. Not a good look at all.

In reality, the claim that the theory that it is man made has been “debunked” is simply false. I consider it unlikely but there is evidence on both sides.

The theory, that this virus was man-made, cannot be “debunked” until the Chinese government comes clean with the notes from the Wuhan lab, specifically all of the sequences and samples therein.

They had the head coronavirus researcher, the “bat lady,” say that she was relieved that others found that the disease-causing virus had not been made in her lab, but the Chinese government had already poisoned that well by having other people recant and lie to repress vital information about the epidemic.

notamemberofanyorganizedpolicital in reply to Valerie. | May 12, 2020 at 3:37 pm

Remember the Communist Chinese have destroyed all the lab notes, and disappeared the lab researchers and lab scientists. Presumably they have murdered them?

They have one-scientist. They were a “burden”, an inconvenience, an obstacle to social progress, and summarily Planned under the State-established “secular” Church. To be clear, a wicked solution, albeit to a hard problem. There are precedents.

Latest intelligence shows the Wuhan Institute of Virology was shut down in October. No vehicles were allowed in, and all cell phone usage on campus abruptly stopped.

So, it came from there. But it could have been a natural virus they were studying.

The MSM, as CBS does in its story, confuses the public (probably intentionally) concerning the nature and the source of the virus. “Not man-made” does not mean “not escaped or intentionally released from a lab.”

Yes. And people seem to ignore the fact that the wet market theory is not inconsistent with the lab theory. Supposing an infected bat or pangolin was sold at the wet market, how did it get there?

An animal at a wet market could have been harvested in the wild and brought there, shedding some of its viral inhabitants around other animals. Viruses mutate in little time, and some of those mutated viruses easily jump species. According to a wikipedia article I read a few days ago, some virologists think most of the rhinoviruses and coronaviruses we now deal with jumped to human hosts around 10-12,000 years ago.

Yes, it could have. But it could also have come from the lab. It would be completely typical of a communist society like China for animals that were supposed to be destroyed to find their way to the market instead.

If 60 seconds was a news outlet they might explain why phone traffic around the lab in Oct 2019. It wasn’t that way in Sep. or Nov.

They will as soon as they figure out how to blame Trump for the lab shutdown.

I have no problem believing that this is a man made virus, and that it was planted by the Chinese with help of their accomplices, the Democrat Party. Both benefit from the American economy failing. The Chinese have declared that they want to be the number 1 global financial powerhouse, by whatever means necessary. It doesn’t matter to them how many people they kill, their own or ours to achieve this goal. The Democrats want to destroy the Trump Presidency, also by whatever means necessary.
It was Bill Clinton that met with visiting Chinese dignitaries while he visited Moscow when he was at Rhodes University. Then it was President Bill Clinton that granted China, “Most Favored Nation” status giving them unlimited access to American markets. He also give them our Ballistic Missile and satellite technology with the blessings of his Democrat cronies