Can’t risk alienating his base. 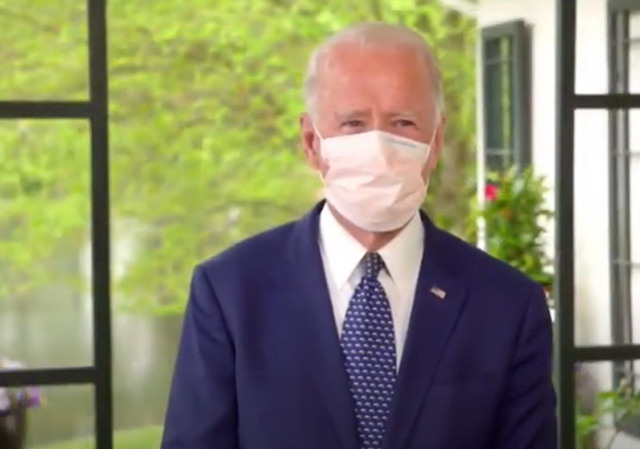 Riots are still unfolding in Minneapolis and various other American cities. Joe Biden, the presumptive Democratic nominee, has finally issued a statement.

He spoke about George Floyd on Friday night but failed to mention the riots.

Joseph Simonson and Emily Larsen reported at the Washington Examiner:

Biden fails to condemn rioting in remarks on Minneapolis

In his public statements about George Floyd’s death in police custody, Joe Biden conspicuously left out any mention of the rampant civil unrest and mob violence plaguing Minneapolis and other cities across the country.

During a Friday address, the former vice president condemned “systemic” injustice and attacked President Trump for his incendiary tweets late Thursday night, in which the president wrote that “when the looting starts, the shooting starts.”

“This is a national crisis,” Biden said. “We need real leadership right now. Leadership that will bring everyone to the table so we can take measures to root out systemic racism.”

Rioting in Minneapolis and St. Paul has led to the damage or destruction of dozens of businesses. On Thursday night, a crowd stormed into and subsequently burned down a Minneapolis Police Department precinct house.

Just after midnight this morning, Biden finally addressed the issue on Medium:

We are a nation in pain, but we must not allow this pain to destroy us. We are a nation enraged, but we cannot allow our rage to consume us. Please stay safe. Please take care of each other. https://t.co/Y224rANwUF

We are a nation furious at injustice.

These last few days have laid bare that we are a nation furious at injustice. Every person of conscience can understand the rawness of the trauma people of color experience in this country, from the daily indignities to the extreme violence, like the horrific killing of George Floyd.

The act of protesting should never be allowed to overshadow the reason we protest. It should not drive people away from the just cause that protest is meant to advance.

Meanwhile, some Biden campaign staffers are donating to a group that’s bailing out rioters.

Campaign staff for Democratic presidential candidate Joe Biden are advertising their donations to a group that pays bail fees in Minneapolis after the city’s police jailed people protesting the killing of a black man by a white police officer.

At least 13 Biden campaign staff members posted on Twitter on Friday and Saturday that they made donations to the Minnesota Freedom Fund, which opposes the practice of cash bail, or making people pay to avoid pre-trial imprisonment. The group uses donations to pay bail fees in Minneapolis.

Biden campaign spokesman Andrew Bates said in a statement to Reuters that the former vice president opposes the institution of cash bail as a “modern day debtors prison.”

But the campaign declined to answer questions on whether the donations were coordinated within the campaign, underscoring the politically thorny nature of the sometimes violent protests.

Makes you wonder, doesn’t it?

Why is Joe Biden’s campaign staff soliciting donations to bail out out-of-state “protestors” who are burning down property and deliberately sowing chaos?

Shows you where their priorities are. https://t.co/kGz9RJTkDa

We sanction Iran for supporting terrorists. Time to do the same thing to the Democrat Party.

If biden gets elected, our freedom is in as much peril as if hillary clinton was elected.

Maybe worse. He’s not of sound mind, and he is a mere sock puppet of the most malignant forces ever pitched against our country. Hitler and Togo were pikers in comparision. And at least they weren’t within our borders and in our government and our schools and our media.

‘Nursing homes’ are the new concetration camps, and Chines ‘flu’ is the new Zyklon B. ‘Flu monitors’ are the new brownshirts. If biden is elected, you just might wind up in one.

Jeff Bezos is the new Fritz Thyssen. (Thyseen was one of the top German industrialists who funded the rise of the Nazi party and Hitler.)
https://en.wikipedia.org/wiki/Fritz_Thyssen

If biden is elected, you just might wind up in one.

Wait why is Biden’s campaign raising money to bail out the white nationalists who are looting and burning buildings?

The Biden staff members should be made to meet face to face with the black business owners who lives are ruined, the black people now out of work due to the rioters and black people whose houses or apartments or cars were damages or destroyed by the same rioters that the Biden people are bailing out.

That would be something to see.

Biden is such a worthless moron. Wonder who actually writes the words that he mumbles.

Given the tweets of support for the rioters by Obama, Jarrett, Brennan, Comey, Schiff, Hollywood, the Biden campaign team, the MSM etc. I have come to believe that the escalation and deployment of Antifa is Democrat policy designed to destroy middle class blacks, their neighborhoods and professions in order to drive them away from Trump.

If republicans are the racists, why are the majority of the cities burning run by democrats?
Could it be the republican run cities might arrest and/or shoot the violent anarchists?

all creepy joe has to do to show leadership is to announce to the country, addressing the rioters of course, to end the violence…. do you think he could end the rioting and violence? oh hell no, that would take real leadership. he yammers about leadership but has lead from behind all of his life.

They must think we are stupid an believe everything we are told.

Then why are Hollywood Liberals and Biden’s staff bailing them out?

This isn’t about race, there are individuals who can’t responsibly handle authority. They make their way into every aspect of society, including police departments. You get on the wrong side of the wrong cop and race means nothing. I would invite anyone who isn’t aware of it to read the Stanford prison study from 1971.