Wuhan Coronavirus outbreak triggers a “series of violent prison disturbances in the country.” 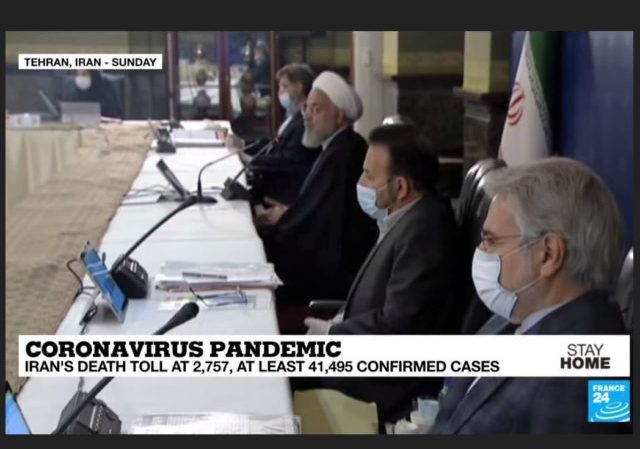 With the worsening of the Wuhan Coronavirus outbreak in Iran, prisons across the country are witnessing rioting and mass breakouts, Iranian state-run media confirmed.

As the official Iranian death toll nears 3,000 and confirmed cases of the virus reach close to 45,000, Iran has become an epicenter of the virus which that first appeared in the central Chinese city of Wuhan. The actual extent of the outbreak could be much higher, as suggested by the mass graves dug by the regime and elaborate misinformation campaign.

The prison unrest comes when the regime has already released around 100,000 inmates in a desperate move to stop the spread of the virus. About 50,000 are still languishing in Iranian prisons, including several U.S. nationals in illegal custody. Tehran excluded political prisoners and dissidents from the mass release, the U.S.-based Center for Human Rights in Iran disclosed.

The news website Times of Israel reported the series of prison riots:

Prisoners in southern Iran broke cameras and caused other damage during a riot, state media reported Monday, the latest in a series of violent prison disturbances in the country, which is battling the most severe coronavirus outbreak in the Middle East. (…)

The state-run IRNA news agency quoted Governor Enayatollah Rahimi of the southern Fars province as saying a riot broke out at Adel Abad Prison, the main lockup in the city of Shiraz. Rahimi said prisoners broke cameras and caused other damage in two sections housing violent criminals. No one was wounded and no one escaped.

IRNA reported Friday that 70 inmates had escaped Saqqez Prison in Iran’s western Kurdistan province. Prisoners beat guards during the chaos, a local prosecutor said. Several inmates later returned on their own to the prison.

Since the beginning of the year, riots have broken out in prisons in Aligudarz, Hamedan and Tabriz as well, with some prisoners escaping, IRNA reported.

This video purports to show scenes outside Iranian prisons.

Some of the first cases of the Wuhan virus in the country can be traced to Mahan Airlines, an entity run by Iran’s Islamic Revolutionary Guard Corps, a U.S. designated terrorist group and Iranian regime’s military arm. The terror-linked airlines continued to operate flights into China despite a full-blown pandemic in that country. The regime tried to downplay and cover-up the outbreak and only admitted once several ministers, regime officials, and IRGC commanders contracted the disease.

Iranian cover-up of the outbreak has put lives at risk across the region, Secretary of State Mike Pompeo warned on Monday. Particularly referring to China and Iran, Pompeo said on The Sean Hannity Show: “We need every country to step up and provide accurate, transparent information. And if we can’t have that, if we have disinformation instead, more lives will be at risk not only today but in the weeks ahead as we battle this enormous challenge.”

Hard hit by the life-threatening disease, many Iranians are resorting to fake remedies circulating on social media. Close to 300 Iranians died, and more than 1,000 have been reported sick after drinking toxic methanol following one such deadly hoax, media reported on Monday said.

Instead of easing people’s suffering, the regime has reportedly become engaged in profiteering from the outbreak. Iran’s Supreme Leader Ayatollah Khamenei’s office is “using the outbreak of COVID-19 as an opportunity for making more money by importing and producing protective masks,” The Czech Republic-based Radio Farda reported in a separate report on Monday.

Iran has squandered billions in financing Shia and Sunni Islamic terrorist groups across the Middle East following the lucrative Obama-Kerry nuclear deal nearly five years ago. Tehran has run out of liquidity as sanctions imposed by the current administration tighten the grip on the regime’s oil, banking and shipping sectors.

Meanwhile, some European countries stepped up to bail out the regime this week, making their first transaction through the EU payment mechanism, in direct violation of U.S. sanctions on the regime. “France, Germany, and the United Kingdom confirm that INSTEX has successfully concluded its first transaction, facilitating the export of medical goods from Europe to Iran,” German Foreign Ministry confirmed on Tuesday. Berlin vowed further payments to Tehran using mechanism system, saying: “INSTEX and its Iranian counterpart STFI will work on more transactions and enhancing the mechanism.”

It remains to be seen if the transactions between Europe and Iran remain limited to medical and humanitarian needs. It is worth noting that the U.S. has long exempted such humanitarian aid from sanctions.

The European powers should know that any money going to Tehran could divert it to fund terrorism, even against their own troops and civilians. Earlier this year, Iranian President Hassan Rouhani threatened the European forces stationed in the Middle East. “Today, the American soldier is in danger, tomorrow the European soldier could be in danger,” the Iranian president warned on January 15. The threat came shortly after Iran’s Supreme Leader Ayatollah Khamenei declared a “jihad,” or Islamic Holy War, on the U.S. following the killed Qassem Soleimani, the chief of Iran’s terrorist Quds Force, in an American airstrike.

The U.S. has repeatedly raised concerns about the EU payment system, which it sees as a tool for money laundering and terrorism financing. European money flowing to Tehran under the INSTEX will most likely end up in the coffers of terrorist groups such as Iran’s Islamic Revolutionary Guard Corps (IGRC) and Lebanese Hezbollah, the White House maintains.

While Secretary Mike Pompeo renewed the U.S. offer of medical and humanitarian to the Iranian people last week, the State Department made it once again clear that it wants to prevent Tehran from acquiring nukes.

Not willing to chance with the regime, the U.S. on Monday renewed restrictions Iran’s nuclear program for the next 60 days aimed a hampering the government from developing nuclear weapons. “US is renewing four nuclear restrictions on Iran for an additional 60 days. We’ll closely monitor developments in Iran’s nuclear program and can adjust these restrictions at any time,” the State Department spokeswoman, Morgan Ortagus, said on Monday. “As President Trump said earlier this year, Iran will never be allowed to have a nuclear weapon,” she added.

Weren’t they going around licking shrines just a short time ago?

It is hard to find compassion for those in this terrible country, mainly due to it’s dictators who are bent on destruction. This also shows how close they worked with China, in my opinion.

I do not trust China and it’s role in all this mess. Be it a bio-weapon or accidental, they are the cause of far too many diseases that are horrendous. Seems President Trump was ahead on the curve against China, though unfortunately, thanks to our left and RINO Never Trumpers, his efforts were delayed.

China needs to be cut off from being providers of so much of the worlds manufacturing. They are a danger to the world under their current regime.

the closer the ties to China, the worse it will be

I would guess that most of the prisoners are political or violated some religious edict, the real criminals are in the regime.

notamemberofanyorganizedpolicital in reply to boulder. | April 1, 2020 at 3:47 pm

Many may have been imprisoned for refusing to lick Barrack’s
monument.

Let’s hope the virus is particularly unkind to corrupt despots.

Iran’s Supreme Leader Ayatollah Khamenei’s office is “using the outbreak of COVID-19 as an opportunity for making more money by importing and producing protective masks,” The Czech Republic-based Radio Farda reported in a separate report on Monday.

His holy beard filters out the pathogens.

Not that a mask would seal against that pad of fur. I shaved mine off so an N95 would seal better. When the pestilence is under better control and we have a vaccine, it grows back. It hid the sagging skin on this codger’s neck and jaw.
.

I agree that official China should not be let off the hook on this one. I believe that our economy should be decoupled from China’s. I would not be surprised if this turns out to be a bio-warfare “test run” launched by Beijing. My wife, who is Chinese, initially reacted to complaints about calling it “the Chinese virus” by saying, “So? It came from China.”

However, in our community, which is full of people of Far Eastern origins/ancestry, a few people we know have apparently been victimized or given dirty looks. Hence, while understanding that those who speak of the “Chinese virus” or “Wuhan virus” are probably not racist, I will try to consistently call this pestilence COVID.

notamemberofanyorganizedpolicital in reply to Kepha H. | April 1, 2020 at 3:46 pm

Trump is regularly blamed for every American death from this virus with the flimsiest evidence. by the same token he should get credit for each Iranian guard death because his sanctions forced them to deal with the Chinese.

Trump is blamed for breathing, I am sick of all the TDS crap.

This is one of the very few nations in the world where the convicted are probably the good guys.

As usual, Germany is playing both sides of the aisle–pretending to be a US ally while playing footsie with Iran and Putin. I was twice a visiting professor at German universities and let me tell you the German national character remains the same as in 1914 and under Hitler–pushy and domineering.