Progressives Criticize Warren for Endorsing Biden Since ‘Corporate America,’ ‘Billionaires’ Back Him

Progressives Criticize Warren for Endorsing Biden Since ‘Corporate America,’ ‘Billionaires’ Back Him

Looks like Democrats will face a “Never Biden” movement, but it may not be as powerful as the “Never Hillary” one in 2016. 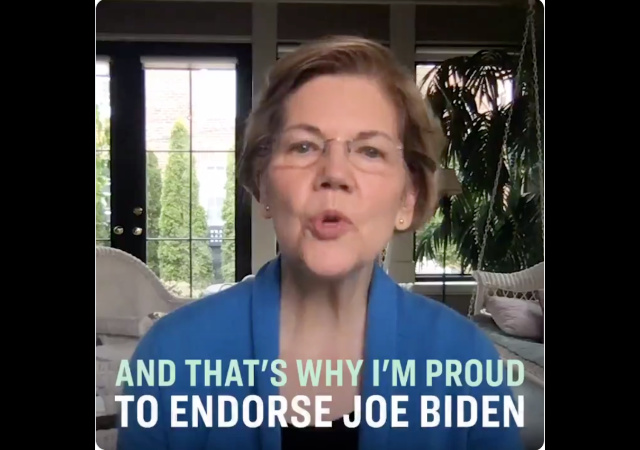 Warren did not receive as much hate as she did when she did not endorse Sen. Bernie Sanders (I-VT) after he dropped out, but it looks like a “Never Biden” movement might make some waves like the “Never Hillary” people in 2016.

Warren recited the usual talking points one does in endorsement videos. You know, “Biden has spent nearly his entire life in public service,” listens, understands, has a heart of gold, blah blah blah.

In this moment of crisis, it’s more important than ever that the next president restores Americans’ faith in good, effective government—and I’ve seen Joe Biden help our nation rebuild. Today, I’m proud to endorse @JoeBiden as President of the United States. pic.twitter.com/VrfBtJvFee

Now it’s up to all of us to help make @JoeBiden the next president. Let’s get to work. Go to https://t.co/HrbPj2qctA right now, and chip in your $5, make some calls, send some texts—because we are all in this together.

So courageous of Warren and President Barack Obama to back Biden now that he’s the last man standing.

The Bernie Bros came out in full force after Warren applauded Sanders when he dropped out because she never endorsed him. Sanders and Warren aligned on many issues so it seemed to make sense she would endorse him.

Some people still think Warren is a snake, hypocrite, and cannot forget Biden’s past.

God Warren, how can you say this to people, to voters, to American citizens after the 40 years that Joe spent taking down LBJ’s work on the war on poverty, which was won, replacing the priority of people with the Chamber of Commerce. It’s just evil

You are supporting a Presidential candidate that is actively wanting to take the American people’s rights away.

Won’t give him a dime. He’s got billionaires who can fund his campaign. I want change, Biden says nothing will fundamentally change. #NeverBiden

Hell no. I gave as much as I could, but Joe gets nothing from me. He gets enough from his billionaire donors.

It’s over, times up. We’ll all die from climate change in concentration camps because of Warren. She betrayed the people and cost us the very last chance we had to save ourselves. Nothing we will ever do from now on matters because of Elizabeth Warren. She killed the future.

I am never donating to that man.

I donated $500 to Bernie Sanders and I live paycheck to paycheck. Bernie inspires me.

Joe Biden does not represent or inspire me.

If he wants my vote he has to endorse Medicare for all.

I can not imagine why you waited to give your endorsement. Waiting this long it has LOST IT'S VALUE OF INFLUENCE which is true power and now serves as nothing more than a showing of unity. Which we already had.

If anything we are asking for refunds.

Screw your party.
DNC can burn to the ground.#DemocratsAreCorrupt

Yeah, lady. 17 million people are out of work and we should all give money to a senile old man cause reasons.

was she thinking about endorsing Amash? Trump? What has she been waiting for?

This is like announcing that you finally saw the first season of True Detective yesterday, it’s like “okay cool happy for you but what difference does it even make at this point?”

Well, I just threw up in my mouth.

Well, I just threw up in my mouth.

Just when you thought you couldn’t despise Democrats any deeper than you currently do . . .

They really are quite a spectacle. Twitter allows these maladjusted buffoons an opportunity to display to the world what deranged loons they are and they fail to see the irony that they are feathering the nest of billionaire tech bros like Jack Dorsey every time they tweet derisively about billionaires.

Fauxcahoinats that trains already left the station. I guess you and jug ears are starting a new ME-TOO movement.

the toilet brush compliments the tank flapper on a good job

Clearly, Warren thinks that it will be “her turn” in 2024

These people who live and die by their partisan politics are such miserable, vapid creatures. Get a hobby, people.

The one that really stands out:

“I donated $500 to Bernie Sanders and I live paycheck to paycheck. Bernie inspires me.” And what exactly does Bernie “inspire” you to do, you airhead?

She identifies herself as an “educator for Bernie.” This dingbat is a teacher. In New Jersey teachers make bank. If you are living paycheck to paycheck on a New Jersey teacher’s salary, you’re doing something very wrong. My God, I hate sharing the planet with dipshits like this.

Ha! Ha!
It looks like Bernie Bros are going to stay home on Election Day.

Will Joe remember to go vote? And who to vote for?

At this point I think Joe puts his shoes on his ears and answers his bowl of oatmeal when the phone rings.

He also thinks that when Jackson telephones Sharpton, the call is parson to parson.

Speaking of FALLING DOWN PROUD……..

Pelosi: “I Congratulate The Senate Democrats” For Objecting To $250B In Small Business Relief

Clueless in front of $30,000 in expensive double refrigerators and designer ice cream.

Nancy Pelosi
✔
@SpeakerPelosi
We all have found our ways to keep our spirits up during these trying times. Mine just happens to fill up my freezer. #LateLateShow

This fool and fraud is an embarrassment. Please resign from the Senate, Harvard needs you back (not sure for what though).

Lizzie should start a tribute band and perform Loretta Lynn’s album Your Squaw is on the Warpath in its entirety. The tour can be sponsored by Mazola Oil.

So the Fake Indian was speaking with forked tongue when she ripped Clueless Joe during the debates? Biden campaign promised much wam pum so Squaw could build a bigger Wig Wam in Cambridge?

What a collective meltdown of complete idiots. Court idiots, get the baggage that comes with it I guess.

For Warren it’s all about:

1) Not becoming persona non grata with the DNC, and
2) Hoping to snag some position in a Biden administration — she knows VP is out since she’s not a “woman of color,” her Indian crap notwithstanding.

The latter is not as far-fetched as it sounds — if they succeed in getting mass mail-in voting, the voter fraud will be off the charts and could well “elect” a Democrat President.