My family and I boarded a flight on Friday as part of an evacuation measure expected to bring back some 5,000 German nationals home as the Wuhan Coronavirus reaches the southern tip of Africa. 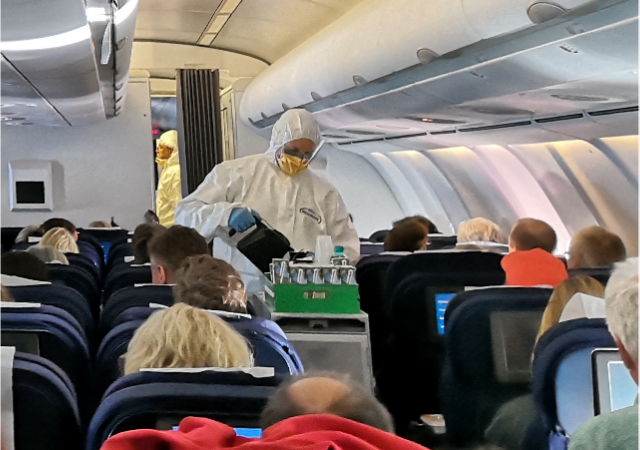 Having reported news for almost six years, I seldom become a subject of it myself. Yesterday was one such rare exception as I was repatriated from South Africa to Germany.

I, along with my family, boarded the first flight out of the country on Friday as part of an evacuation measure expected to bring back some 5,000 German nationals home as the Wuhan Coronavirus reaches the southern tip of Africa.

Following the first confirmed case of the life-threatening virus in early March, South Africa imposed a 21-day nationwide lockdown starting March 27. So far, the country registered 1,585 cases of infection and 9 related deaths. Despite relatively low numbers, given more than 1.2 million infected people worldwide, the government in Pretoria is fearful of a nationwide pandemic. The authorities fears hidden cases of the virus in huge and sprawling townships across the nation. According to the country’s health minister, ‘hundreds of thousands’ of Coronavirus tests are needed to project realistic figures.

Personally, it was hard to say goodbye to our new home we set up about half a year ago. We were blessed to make amazing new friends in such a short time; trustworthy enough to leave our house and our beloved 8-year-old cat ‘Mowgli’ (Yes, I am a Kipling fan!) in their care.

In past two and a half weeks, Germany brought back around 200,000 stranded tourists and nationals from Coronavirus affected countries, the German newspaper Rheinische Post stated quoting the country’s foreign minister.

The German embassy in Pretoria announced the repatriation in a statement this week:

Repatriation flights are set to start on Friday evening from both Johannesburg and Cape Town. The flights are targeted at German tourists who have been stranded in South Africa due to the lockdown and the cessation of commercial air traffic. The Embassy estimates that more than 5,000 German tourists are still in South Africa. The repatriation flights organized by the German government will also be open to citizens from other European Union member states. EU nationals are requested to contact their respective embassies.

The United States is expected to join Germany in evacuating its nationals from the country, the South African media confirmed. Some 25,000 Americans have been repatriated from over 50 countries in the wake of the global outbreak. The repatriation task force set up by the U.S. State Department aims to bring home another 9,000 U.S. national in coming weeks, the USA Today reported recently. The U.S. aims to bringing all Americans home, Secretary of State Mike Pompeo assured.

The South African broadcaster News24 reported the evacuation planned by the U.S. embassy:

Preparations to repatriate US and German citizens are under way as the number of Covid-19 coronavirus cases continues to rise in South Africa. (…) The US embassy in South Africa urged its citizens who wished to return home to reach out to it.

This entails filling out a form detailing their location and personal details.

“We want to ensure that if an opportunity to return is presented, we have as complete a database as possible.

➡️Safe travels!
➡️We are very happy that around 500 Germans, as well as travelers from ???????????? were able to leave on our repatriation flights yesterday.
➡️Looking forward to more flights in the coming days! pic.twitter.com/ajrtXN01rr

Our 24 hour-long ordeal, which included repeated medical checks and long waits, came to an end when we reached our home near Cologne. It is great to be close to (despite observing all ‘social distancing’ norms) friends and family after six long months, but I am overwhelmed by the stories of affected lives and disrupted livelihoods wherever I go.

Our return to Germany would not have been possible without the tireless efforts made by the German embassy staff on the ground in South Africa. For that I remain immensely grateful. My gratitude also goes to the crew members of the South African Airways who joyfully and professionally undertook this mission at great personal risk.

Serious question: Do you really think you will be safer in Germany than in South Africa? Do you think Germany’s numbers will continue to be as low as they have been, while the numbers where you have settled in South Africa will shoot up? And that even if they do, you can’t keep yourself safer in South Africa than you can in Germany?

Also, a note on English usage: In German a comma is used as the decimal point. I assume that’s why you wrote “1,2 million”, because in German that would be the correct way to write it. But in standard English a dot is used instead, so it should be “1.2 million”. (To add to the confusion, in Indian English it would be written as “12 lakh”, or “12,00,000”.)

I totally see your point re the trend in Germany. Can’t say how things will develop. But we still decided to be home in this time of crisis.

Thanks indeed with the decimal/comma error. Totally my fault. 🙂

Comma versus decimal point is nat anywhere as bad as getting the decimal point in the wrong place. I am dating myself by telling you that I taught myself to use a slide rule in 7th grade. And my first engineering calculator was in my early 20s, it was an HP RPN unit and cost about $700.

Where a slide rule is concerned, getting the decimal point in the wrong spot was a common occurrence.

Think about the space program being driven with slide rules 🙂

Maybe you should consider coming to America, we need people like you.

In ZA, safer in the bush. But considering the population and political state of ZA… Germany would balance out better. I hate to say it… but… if ZA was still under apartheid maybe staying there might be better. The economy is tanking also.

Milhouse, stop worrying about dots and commas. Keep yourself and family safe and healthy. I worry about you folks in NY. Hoping those numbers start dropping soon. Or yesterday. God bless.

Not a lot of “social distancing” on that aircraft.

I am glad you made it to your original home in Cologne safe and sound. I hope you are reunited with little Mowgli ASAP.

We have amazing neighbors to take care of Mowgli. Doubt that he will miss us.

Wishing all the best to you are your family as well.

Glad you and your family made it safely home. That would be my choice – to go home. Thank you for your personal report.

Thank you, and same to you and your loved ones!

Absolutely better off in Germany that SA when it gets bad.

Glad to hear you’re safe and home. May it stay that way for your family.

Kipling is one of the best!

It occured to me that mostly young Muslims are going to have a high survival rate and that this will probably accelerate Islamization all over the world.

Same to you and your loved ones as well, Barry!

Awesome post, Vijeta. I wish the very best for you and your family.

Wishing you are your family best of health as well!

I hope you and your family stay safe & you continue the foreign correspondence for LI!

Thank you! Wishing you and your loved ones health and strength as well.

Certainly I would prefer to be in Germany vs South Africa for medical and industrial base. Maybe more importantly, Germany is clean. Remarkably clean. It is difficult to adequately describe but here goes.

Imagine your community had held a total clean up; streets, sidewalk, trash pick up, every public place including commercial and all bathrooms where everything was all at once as free of trash, litter and sanitized. Now imagine that is how it looks every day. That was my experience while stationed in Germany. Way cleaner than the U.S.

Try Singapore. Fascinating place. Has all the veneer of a free country, until you look closely, read the signs, and listen to what people are very loudly not saying.

Singapore is a democracy for the last several years at least. Frankly, I would be tempted to hold it up as an example of how to run a nation, at least a smaller one. I would think it to be what a good Tory of two centuries ago would have sought; individual citizens protected by courts ensuring and enforcing contracts, a legitimate legislative assembly and a strong but still constrained executive.

As for the rigorously enforced legal system, well it seems sound enough. After all as long as one behaves with common courtesy and is willing to adapt to local custom they have little to fear.

While I wouldn’t change our U.S. constitution for that of Singapore, I wouldn’t reject it as invalid. It seems to work well enough for Singapore. Certainly some locations within the U.S. might wish to emulate certain aspects.

Have you been there? I have been there only for short visits of a few days each, but that was sufficient to see that it is not a free country. There is no real freedom of speech; the veneer is there, but if you look closely and listen to how people speak you quickly see what’s wrong. Listen not just to what they say but to what they don’t say; I found that Singaporeans are good at not saying certain things very loudly.