‘You Guys Are Pravda’ — CNN stages Chris Cuomo Emerging From Quarantine, but He Previously Went Out

‘You Guys Are Pravda’ — CNN stages Chris Cuomo Emerging From Quarantine, but He Previously Went Out

“Alright, here it is… the official re-entry from the basement, cleared by the CDC” 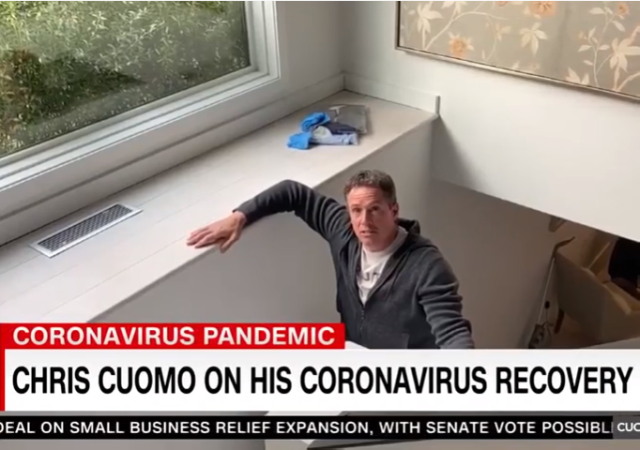 When CNN’s critics say it isn’t a news network, they are not exaggerating. Chris Cuomo has been broadcasting from his basement for weeks while quarantining after he came down with Coronavirus.

Yesterday, they made a huge show of Cuomo emerging from his basement after being cleared by health officials.

Yet just a little over a week ago, he was seen on Long Island by a man on a bicycle, breaking quarantine with family members.

CNN anchor Chris Cuomo is being accused of staging his own emergence from the basement in his Hamptons home where he had been recovering from the coronavirus after his widely-reported spat with a bicyclist last week.

On Monday night’s installment of “Cuomo Prime Time,” Cuomo addressed his road to recovery, which included a video showing him emerging from the basement of his South Hampton home where he had been quarantined.

“Alright, here it is… the official re-entry from the basement, cleared by the CDC,” Cuomo narrated as he walked upstairs to greet his family. “This is what I’ve been dreaming of, literally, for weeks.”

The video then showed him greeting his wife, who had also been diagnosed with the virus. The anchor said she was also “cleared by the CDC” as well.

“This is the dream, just to be back up here doing normal things,” Cuomo said to the camera.

This is literally fake news.

On April 14th, Kate Sheehy of the New York Post reported on an incident involving Cuomo and a man on a bicycle who was questioning why Cuomo was breaking quarantine:

The Long Island resident blasted as a “jackass loser fat-tire biker” by Chris Cuomo in a radio rant told The Post on Tuesday that the CNN host is nothing but a bully — and he has even filed a complaint with cops against him.

“Sometimes he’s scary stupid,” the East Hampton man, who asked to only be identified by his first name, David, said of Gov. Andrew Cuomo’s little brother.

Chris Cuomo launched into a tirade on his SiriusXM show Monday night about how he didn’t like what he did for a living anymore — and ranted about a confrontation he had with a bike rider outside his property Easter Sunday, when the coronavirus-infected TV star was hanging out with his family.

David, who had been riding by, started hassling Chris Cuomo about social distancing, and the CNN star later seethed on his radio show that one big downside to money and fame is that he couldn’t tell the guy to “go to hell.”

Cuomo then had the nerve to tweet this on April 21st:

Please think about others https://t.co/5ICdw5zO1g

Columnist Karol Markowicz, who was born in the Soviet Union, called out CNN for their obvious piece of theater masked as news:

Is this a joke? Yes, this is from Stelter’s newsletter. Chris Cuomo was in East Hampton 8 days ago. This is bananas. pic.twitter.com/91zbpG7fzz

You guys are Pravda. This is so absurd I don’t know how he did it, and then Stelter passed it along, with a straight face. https://t.co/binB5Wj5DF

Even Ben Smith, formerly of BuzzFeed, has called them out:

The extent to which CNN has adopted reality TV values here is pretty remarkable. Including eliding the controversy over Cuomo’s travel. https://t.co/AOS1spHYSR

Somebody ask the governor if CNN should have aired his ne’er-do-well brother’s emergence from a fake basement quarantine after he spent Easter at a friend’s house in a different town yelling at passers-by.https://t.co/A8pQrPVZdz https://t.co/lfhyX3TnuV

Tucker Carlson did a segment on this last night that’s worth watching:

They are not news, they are reality TV.
Everybody knows how ‘real’ reality TV is.

notamemberofanyorganizedpolicital in reply to Exiliado. | April 22, 2020 at 2:26 pm

CNN is as fake as Obama and the Tooth Fairy!

why couldn’t he be like the other Fredo and disappear
for good ?

Anyone watching cnn for news is dumber than dog doo doo.

After his rant over a biker rider. How stupid do they think we are? I guess if you watch the Clinton News Net that answers the question.

Cuomo is a drama queen. He was basically asymptomatic all along. His lung x-rays on live TV showed the disease wasn’t severe. He felt good enough to go out in public and harass a bicyclist. Thousands of people have suffered and this leech still wants its day in the sun.

“Alright, here it is… the official re-entry from the basement, cleared by the CDC,”

Why would the CDC clear a particular patient to come out of a quarantine? I can see a state or city health agency clearing a patient, but the Feds?

Wouldn’t clearance be related to the absence of symptoms for a certain number of days as well as having several negative tests?

And if we are supposed to believe that he has been in his basement for the entire duration of his quarantine, how did the CDC determine that he met the requirements of “being cleared”? Did someone from the CDC come to his house to administer the tests? Did Mr. Cuomo administer the tests to himself and send the results to the CDC for evaluation? This obviously doesn’t pass the smell test.

Just remember the old saying: “There is no truth in Pravda and no news in Izvestia.”

US newspapers transitioned into Soviet block so slowly many did not recognize the results.

Fredo is way past due for getting the dogdoo slapped out of him. A creeper and a wuss, all in one.

From early on I questioned if Fredo even really had the virus. I still believe he was play acting. His wife was diagnosed as having tested positive after Fredo was. How is it they both get released by the CDC on the same day?

I don’t believe he had it. He just was looking to help his brother out by making this “very personal” to the dictator wannabe. His BS hallucinations, yet sick as he was he was fine to keep doing his acting job with CNN.

I suspect they were cooking up having “mom” get it, but felt it would be harder to get her to lie as convincingly as Fredo did.

“Alright, here it is… the official re-entry from the basement, cleared by the CDC,”

Did they play Pomp and Circumstance by Elgar?

Not that more proof was needed.

You’re confused because there’s an inadvertent typo in that sentence. It should read “CNN actor…”.

Fredo was never sick to start with. It was all a publicity stunt.

Where are my comments?

What a putz Fredo is.

As Foghorn Leghorn said in another context, CNN “is as sharp as a bag of wet mice.” As to Fredo Cuomo himself, Fredo gotta be Fredo. You can’t fix stupid.

So, XiNN made a big deal out of Fredo emerging from his hidey hole after allegedly testing positive for the virus. Kudos to him and Mrs. Fredo for getting the official okey doke from big brother’s Minister of What Ails You.

It may be semantics, but I’m not sure that testing positive for the virus but you’re asymptomatic for the entire incubation period qualifies you to claim you “came down with” the Andromeda Strain here.

All the news that is fit to fake!

Cuomo’s and CNN’s riposte will probably be, “This was the officual end to quarantine, that encounter with the biker was just an unofficial exit from quarantine”

Nah, their answer will be:

Don’t you know anything about TV? TV shows are always taped in advance and aired long after. Cuomo’s whole quarantine happened a month earlier. Last weekend when he was in the Hamptons the show we aired last night was already in the can.

He lives in Manhattan, NYC. He was seen in the Hamptons.

I was telling my neighbor that the small business owners in our town should get together and all decide which day THEY want to open.
Then if and when they get tickets, fight those tickets individually and jam up the courts. This is – like cnn – bulls***.
In our town they’d have huge backing.

The Communist News Network,just don’t tune in and when they can’t sell airtime they won’t matter to anyone.

CNN’s stupid viewers really believe all this bs. They don’t even know he was out and about, yelling at people in a Park on Easter Sunday. What morons watch CNN!!!

Upside:
Cuomo’s wife Cristina Greeven Cuomo reported that their son has lost has taste and smell, so now she can feed him ‘good stuff’ that he would normally never eat.

Fredo Cuomo is a wacko! He stages a fake coming out of quarantine video yesterday. He was never is quarantine because his son now has the Chinese virus!