Leading Anti-Israel Boycotter: If Israel Develops Coronavirus Vaccine, “No Problem” to Use it

Leading Anti-Israel Boycotter: If Israel Develops Coronavirus Vaccine, “No Problem” to Use it

Omar Barghouti: “If Israel finds a cure for cancer or for a virus, then there is no problem to cooperate with it.” 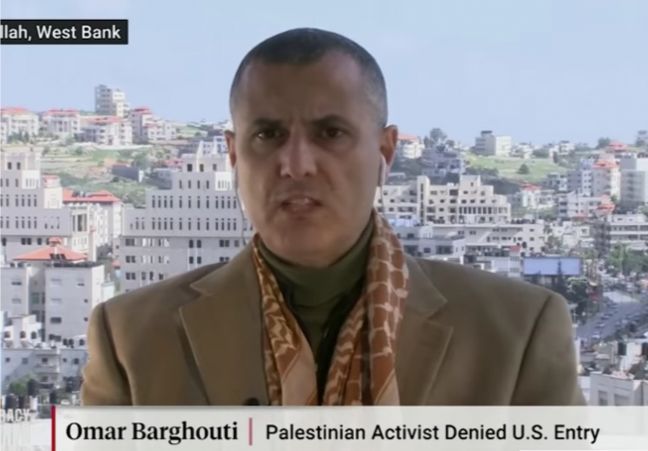 Omar Barghouti, one of the original leaders of the anti-Israel Boycott, Divestment, and Sanctions (BDS) Movement, has told his supporters to take an Israeli-made vaccine for the Wuhan Coronavirus if the Jewish State succeeds in developing it.

“If Israel finds a cure for cancer or for a virus, then there is no problem to cooperate with it,” Barghouti said in an Arabic-language live session on Facebook.

The BDS founder was trying to console his fellow activists perplexed by the strides made by Israeli scientists in finding a cure for the disease that first appeared in the central Chinese city of Wuhan. The comments come as Israel Institute for Biological Research (IIBR) reported ‘significant progress’ towards developing a potential vaccine. Israel is also taking the lead in pioneering a treatment as confirmed cases of the virus reach close to 1.4 million and the death toll crosses 75,000. Israeli pharmaceutical manufacturer Teva has offered US hospitals 10 million doses of its anti-malarial drug hydroxychloroquine, one of the drugs considered to be showing promising signs in patients infected by the virus.

The BSD Movement, which campaigns worldwide for an economic, cultural, and academic boycott of Israel, has also lost the legitimacy of their argument given Israel’s overwhelming assistance to the Palestinian Authority (PA) in the wake of the outbreak. Israel has set up Coronavirus testing labs in the Palestinian Territories. Israeli response even won rare praise from the United Nation, with Nickolay Mladenov, the UN Special Coordinator for the Middle East, commending the Jewish State for its humanitarian efforts.

Omar Barghouti, co-founder of the BDS movement, said in a video on Sunday on Facebook that if Israel discovers a cure for coronavirus (COVID-19), then cooperation with the Jewish state is acceptable.

“If Israel finds a cure for cancer or for a virus, then there is no problem to cooperate with it,” said Barghouti.

The BDS leader also said that if Israel were to find a cure for cancer, for example, then there would be no problem to work with Israel to save millions of lives.

“But I believe that we are not yet in the stage that we need Israel in an urgent way, and it isn’t like anyone else can save us but Israel. If that was indeed the case, then saving lives is more important than anything else,” he said.

“Under the excuse of fighting the coronavirus, we must not have a ‘honeymoon’ with Israel,” he continued, adding that it is acceptable to get medical equipment from the Jewish state since cooperation in this way “is not considered as normalization.”

The comments once again expose the hypocrisy and duplicity of the BDS Movement. This starts with its chief campaigner Barghouti himself, who holds a master’s degree and a PhD from the Tel Aviv University. Despite Barghouti’s claims of running a “non-violent human rights movement,” his BDS campaign team is riddled with Palestinian and Islamic terrorists.

The BDS is an Antisemitic movement modeled on the “Kauft nicht bei Juden” (Don’t buy from Jews) campaign run by the Nazis in the run-up to the Holocaust — an uncanny similarity acknowledged even by the German parliament in an anti-BDS resolution passed in last year. The U.S. House of Representatives also condemned the Antisemitic movement in a July 2019 resolution passed by 398-to-17 votes.

Given Barghouti’s shady past, President Donald Trump’s administration denied him entry to the United States last year. Despite his inability to campaign in the U.S. himself, the BDS movement has gained the support among prominent Democrat lawmakers such as Ilhan Omar and Rashida Tlaib. Bernie Sanders’ surrogates for the 2020 campaign, Linda Sarsour and Amer Zahr are also outspoken BDS supporters.

The high-profile support for the BDS Movement is not limited to the United States. The European Union and several European governments have also been accused of funneling tens of millions of euros annually into NGOs running the BDS campaign. According to a 2019 Israeli study, many of these pro-BDS NGOs are nothing more than front organizations for terrorist groups such as Hamas, the Popular Front for the Liberation of Palestine (PFLP), and the Palestinian Islamic Jihad.

For the good of the rest of humanity, they should not be allowed to access any Jelish invented medical advances.

I am not as morally and ethically advanced as some people, and I would call for Israel to refuse all assistance to so-called Palestinians — except for cleaning up the corpses. Let them all die!

Just let them know that pig lard was required for the bonding agent in the pill.

Of course the hypocrites would take the vaccine. And then they’d start rumors that SARS CoV-2 was actually engineered by Israel. These people are the scum of the earth and decent human beings should slap them down whenever they open their foul mouths.

What I find amazing is that these people do not understand how important Jews are to humanity’s advancement.

saving lives is more important than anything else,

But not Jewish lives…

Actually, if I were one of these people I would object only to actions that help Israel. Buying from and selling to Israelis helps Israel, so I see why they object to it. But taking from Israel doesn’t help it at all, it just deprives Israel of resources, so I don’t see why anyone thinks these people should object to it.

Personally, I don’t care about what those people like or dislike. They are scum, and deserve no consideration.

The State of Israel as a light unto the nations[edit]

Israel’s vision of “Light Unto the Nations” was reflected in the words of the current Israeli Prime Minister Benjamin Netanyahu, in his address at the 2010 Herzliya Conference:

“You are dealing with our people’s fate because it is clear today that the fate of the Jewish people is the fate of the Jewish state. There is no demographic or practical existence for the Jewish people without a Jewish state. This doesn’t mean that the Jewish state does not face tremendous challenges, but our existence, our future, is here. The greatest change that came with the establishment of the Jewish state was that Jews became more than just a collection of individuals, communities and fragments of communities. They became a sovereign collective in their own territory. Our ability as a collective to determine our own destiny is what grants us the tools to shape our future—no longer as a ruled people, defeated and persecuted, but as a proud people with a magnificent country and one which always aspires to serve as ‘Light Unto the Nations’.”[8]

Benjamin Netanyahu in his 2017 UN speech quoted Isaiah again that the state of Israel is “a light unto the nations, bringing salvation to the ends of the earth”. [9]

Isreal has always followed a humanistic approach in situations like this. It has gotten them NOWHERE. In fact, it’s made things worse for them, because the antiSemitic scum throughout the world sees them as weak for it.

If Israel does indeed develop a vaccine for the China Virus, and they distribute it anywhere else except to allies, they deserve the grief they later get by being weak.

Back to our situation here: Israel needs to PUNISH its haters, otherwise they will be healed by Israel’s medicine, and made stronger for the battle against Israel. Forget the ‘appearances’ – they mean nothing anymore. All that matters is self-protection. Ghandism by Israel is dumb.