Benjamin Franklin: “Those who would give up essential Liberty, to purchase a little temporary Safety, deserve neither Liberty nor Safety.”

This is not creepy at all. Google announced the company will hand over location data to health officials to help combat the Wuhan coronavirus.

Google promised it will not release “personally identifiable information, like an individual’s location, contacts or movement.”

Yeah, where have we heard that before? Doesn’t Google already work closely with the government? You betcha! France’s data watchdog fined Google $57 million “last year for a lack of transparency over how it uses people’s data.”

As global communities respond to the COVID-19 pandemic, there has been an increasing emphasis on public health strategies, like social distancing measures, to slow the rate of transmission. In Google Maps, we use aggregated, anonymized data showing how busy certain types of places are—helping identify when a local business tends to be the most crowded. We have heard from public health officials that this same type of aggregated, anonymized data could be helpful as they make critical decisions to combat COVID-19.

Starting today we’re publishing an early release of our COVID-19 Community Mobility Reports to provide insights into what has changed in response to work from home, shelter in place, and other policies aimed at flattening the curve of this pandemic. These reports have been developed to be helpful while adhering to our stringent privacy protocols and policies.

The reports use aggregated, anonymized data to chart movement trends over time by geography, across different high-level categories of places such as retail and recreation, groceries and pharmacies, parks, transit stations, workplaces, and residential. We’ll show trends over several weeks, with the most recent information representing 48-to-72 hours prior. While we display a percentage point increase or decrease in visits, we do not share the absolute number of visits. To protect people’s privacy, no personally identifiable information, like an individual’s location, contacts or movement, is made available at any point.

It sounds pretty vague to me, which is one reason why I find it creepy. I expect Google and the health officials to have transparency when it comes to this.

And yes, the disclaimer is very broad. I’d say, this is largely a PR move.

Apart from this, Google must be held accountable for its many other secondary data uses. And Google/Alphabet is far too powerful, which must be addressed at several levels, soon. https://t.co/oksJgQAPAY

Although he also called for Google to provide more detail about the technical processes it’s using in order that external researchers can better assess the robustness of the claimed privacy protections. Such scrutiny is of pressing importance with so much coronavirus-related data grabbing going on right now, he argues.

“It is all aggregated; they normalize to a specific set of dates; they threshold when there are too few people and on top of this they add noise to make — according to them — the data differentially private. So from a pure anonymization perspective it’s good work,” de Montjoye told TechCrunch, discussing the technical side of Google’s release of location data. “Those are three of the big ‘levers’ that you can use to limit risk. And I think it’s well done.”

“But — especially in times like this when there’s a lot of people using data — I think what we would have liked is more details. There’s a lot of assumptions on thresholding, on how do you apply differential privacy, right?… What kind of assumptions are you making?” he added, querying how much noise Google is adding to the data, for example. “It would be good to have a bit more detail on how they applied [differential privacy]… Especially in times like this it is good to be… overly transparent.”

The project covers 131 countries and regions. The first report details data from March 29. 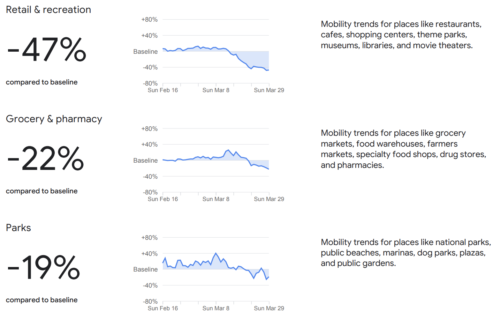 Let’s look at my state of Oklahoma. 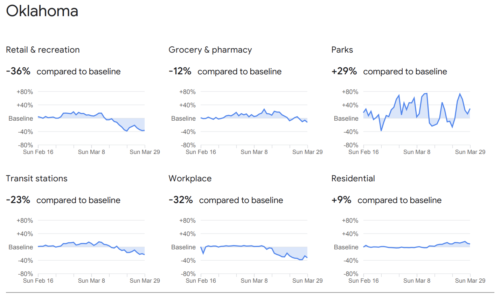 Is all of this accurate? I mean, the reports lag two or three days. Not hours, but days!

However, looking at their Austria report, I can’t believe visits to ‘retail & recreation’ places have decreased only 87%. All those places are closed, staff is mostly absent.https://t.co/Dc1BsL5ey0 pic.twitter.com/7uOB3mTLP5

There are many reasons why Google’s data may be inaccurate, e.g. measurement, mapping to place coordinates, classification of places…

In any case, if governments or researchers should get further non-personal analyses from Google, everything must be 100% transparent, at least.

De Montjoye is iffy on the accuracy:

On the topical question of whether location data can ever be truly anonymized, de Montjoye — an expert in data reidentification — gave a “yes and no” response, arguing that original location data is “probably really, really hard to anonymize”.

“Can you process this data and make the aggregate results anonymous? Probably, probably, probably yes — it always depends. But then it also means that the original data exists… Then it’s mostly a question of the controls you have in place to ensure the process that leads to generating those aggregates does not contain privacy risks,” he added.

The data just shows where people are going. It cannot tell you if people are practicing social distancing. A bunch of people can go to a park and stand 4-6 feet from each other:

Wyoming is showing a decline in travel to most places but an increase in visits to parks. That tells you nothing about whether people are social distancing in those parks. But as we’ve already seen in the United Kingdom, police are quite capable of confusing “traveling to parks to get exercise” with “not engaging in social distancing.” On Thursday, Los Angeles County sheriff’s deputies arrested a paddleboarder off the coast of Malibu for violating a stay-at-home order. Bringing the man to the sheriff’s station in Calabasas for processing before releasing him exposed him to a much greater risk of COVID-19 infection than if they had just left him alone.

Israel’s domestic intelligence agency, the Shin Bet, is retooling its spyware to meet the medical emergency. In recent days it has deployed a nationwide digital-surveillance program, using technology designed for counterterrorism, to locate people at risk of infection. The program uses cellphone data of people known to be infected to identify who else was close enough to catch the virus.

As a result of the surveillance, the health ministry said 400 Israelis received a text message Wednesday asking them to enter quarantine.

“According to an epidemiological survey, you were near someone sick from coronavirus. You must immediately enter Quarantine for 14 days to protect your relatives and the public,” the text message said.

Shin Bet’s program, authorized by the attorney general and supported by health ministry officials, was criticized by privacy advocates and some lawmakers. The supreme court, acting on a petition by two civil-rights groups, issued an injunction ordering a halt to the program by next Tuesday unless parliament establishes the relevant oversight committees. The parliament was shut Wednesday by its speaker, an ally of Mr. Netanyahu, in a dispute with opposition parties over control of its committees.

Even hear od this little paper called the PATRIOT ACT?

notamemberofanyorganizedpolicital in reply to 2smartforlibs. | April 3, 2020 at 5:07 pm

I said the other day:
9/11 changed the way we live, forever. Now this virus will do something similar.
Some of the changes could be good, but I am afraid most of it will be bad, really bad.

In related news, Google will soon decide to hand over all of your other data to help combat Thought Crimes.

What could possibly go wrong with all this “SPYING?”

Gives Communists Insight of were to send their “infection agents”….?

That that with a grain of mustard……..

So now they can tell us to stay home and confirm whether we are complying. It’s time to push back. I made myself a Faraday box years ago but this wasn’t the situation I was anticipating. So so I’ll just leave my electronics home in the box and let them guess where I am.

leave your phone at home if you leave the house.

Total BS. And, mark my words. This will be monetized immediately after the China Plague is over. And the executives will have access to masking software.

notamemberofanyorganizedpolicital in reply to puhiawa. | April 3, 2020 at 5:31 pm

Sure Google has already done that.

For them in this plague, it’s a benefit, and not a defect.

Unlike China, it is not compulsory to carry your phone with you at all times. Since most of us sequestered at home, you don’t need it for the few times when venturing out of the house.

Who knew that Google — a company that didn’t even exist yet — was the Big Brother image used in that famous Apple TV ad from 1984?

I have a landline, a cpu and a kindle. Very easy to turn off the location data on the kindle so long as you don’t use public WiFi. Use of public WiFi is probably the single biggest risk to data compromise for an individual.

I trust Big Tech about as much as I trust Pinocchio.

Dig out the old MP3 player when doing your walks. If you didn’t toss it or hide it away in some dingy basement crevice.

If Google can anonymize the information, they can do the opposite. As accomplices to the oppression of the Chinese people, they are not to be trusted to do the right thing here or in any other area. I have been working to sever all ties with Google. Its much tougher than I thought. In some instances, I can’t delete their program/app and in others I didn’t even know it was Google. All I can do is plug away and try to minimize my interaction with Google.

What a sinister organization.

It needs to be busted up, so competition can level the playing field.

Wrap up your cell phone in aluminum foil when you travel. It can’t send or receive a signal when you do.

Easier to just leave it in the drawer. I don’t, haven’t, and won’t carry a cell phone.

One of our top priorities from this point on should be to promote and propagate technology that will not only end Google’s monopoly, but end its very existence. They are as much our enemy as China is.

So the government is going to watch Google’s traffic app?

If the feds are half as good at spying on me as they are at dispersing disaster funds, Google might as well sell it to North Korea.

When it comes to failing at socialism, we might have been a little too critical of Venezuela; our government is failing far worse and faster with a million times the resources.

I’m with Yves-Alexandre de Montjoye. Even if they aggregate the data to show trends, they started with identification of the phone. Your phone. How can they *not* know who you are?
.