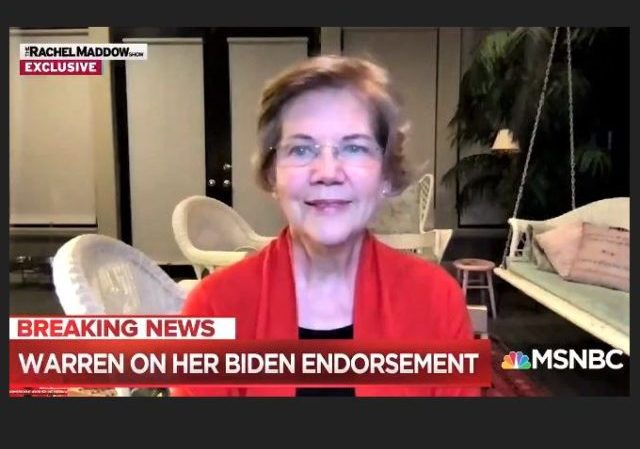 So this has been Elizabeth Warren’s endgame since it became clear several months ago that she would not win the Democratic presidential nomination. Warren stayed in the race long enough to siphon off enough support for Bernie on Super Tuesday to hand Biden the nomination.

Bernie supporters called her a snake. The snake emoji became the symbol of Berner fury at Warren.

Even after Super Tuesday, Warren held back an endorsement of Bernie. She sat back and waited, but for what? Hoping Biden’s ‘cognitive decline’ forced him out before the convention, with Warren there as the ‘unity’ candidate (as laughable at her being a unity candidate would be)? Perhaps squeezing policy and personnel concessions out of Biden?

Perhaps the VP nomination? Bingo. It’s a two-fer. If Biden fades before the convention, Warren being discussed as his VP (even if not official) would position her well. If Biden was propped up long enough to give an acceptance speech, Warren would be there as his replacement, winning the presidency by other means.

The ever tactical Warren just announced on the Rachel Maddow show that if asked, she would accept the VP nomination:

Here’s a more complete clip, she has phoniness dripping from her pores:

This announcement clearly was planned. Warren does nothing without her consultants scheming — it’s all but guaranteed that they set up this question with Maddow or her staff in advance.

Biden would be insane to pick Warren, and presumably Biden has handlers to make sure that doesn’t happen. Warren supporters are going to vote for Biden, but it would alienate Bernie supporters. Also, it would keep Warren’s Native American deception in the public eye — Biden has enought problems with Ukraine and China, does he really need to bring the Cherokee Nation into it?

So I’m not expecting Warren to be asked. But if she were, well, it would keep up busy.

Is there anything real about this woman?

notamemberofanyorganizedpolicital in reply to NotKennedy. | April 17, 2020 at 9:26 am

Things just keep getting worse and worse for the DEMS
and they richly deserved it.

She’s a phony but she didn’t siphon off enough Bernie support to cost him the election.
Enough Democrats woke up enough to realize the train wreck they were causing with Bernie as their candidate plus the young supporters were too lazy to vote.

Once he got to know her, Joe Biden would hate her guts.

He would, until he had to be re-introduced to her later in the day.

…and presumably Biden has handlers to make sure that doesn’t happen.

Presumably, Biden has handlers to make sure he’s somewhat comprehensible when he speaks, but how’s that working out?

notamemberofanyorganizedpolicital in reply to rinardman. | April 17, 2020 at 9:27 am

Can’t he just ZOOM it in?

She came in 3red in her home state. It proved to be her Little Big Horn.

Yes – If the Squaw could not even win in her adopted State, what use would she be to Biden? The Fake Indian is trying to work her way into a cabinet position in the Bden administration –

Considering how safe most senate seats are, I have never understood why a sitting senator would leave that position for a spot in administration. Once you leave the senate it is tough to get that job back.
There are certainly some advantages when it comes to not having to fund raise and campaigning. Once you leave the senate and your time is up in the executive branch any power you had is over.

“…why a sitting senator would leave that position…”

Because the thirst for power is never quenched.

John Francois Kerry gave up a lifetime Senate Seat to be Sec of State – that is how we ended up with Ed “Mr. Frosty” Markey.

With Liz Warren on the Biden ticket, I give 100% odds that Biden is removed by the 25th Amendment.

Sure, dim-witted Biden needs an insufferable, loathsome, mendacious, self-aggrandizing scold/nag/shrew/termagant/harridan-demagogue-fabulist crone as his running mate, like he needs a myocardial infarction.

Please, Joe, make this happen. There may not be a greater gift that you could give to the right than adding this disingenuous harpy to the ticket.

Biden is rapidly mentally deteriorating.. Remember when he plagiarized campaign speeches decades ago?

I hope to soon see Liz and Stacy bashing each other.
What a show.

Abrams will be the VP choice. Clyburn had already extracted this promise from Biden Inc. prior to the SC primary for his support.

Abrams has mental issues. Biden will ignore his promise to Clyburn, who will then suck it up and shut up when promised that he will be VP once Biden is 25thed.

“Biden will ignore his promise..”

Wouldn’t he have to remember a promise to ignore it?

The probability of a President Joe Biden being removed from office via the 25th Amendment is now astronomical.
What can be said of the judgement of those who have endorsed “DEMentia” Joe Biden ?

But there must be an upside:
a) short inaugural address.
b) short SOTU addresses
c) new push to retire like-aged politicians
d) get to test out the 25th amendment (would be easier to remove POTUS Joe than candidate Joe)

As VP, 1 week to 1 month after Inauguration Day, Fauxcahontas will invoke the 25th and dump Biden. If she doesn’t move quickly, she will have an “accident”, and “Biden” will nominate Hillary for the position. If the RP Congress doesn’t confirm Hillary to the position, the DLSM, universities, everybody will pressure them as waging war against women and they will fold like wet panties.

Once installed as VP, within 6 months, fed up of being Biden’s puppeteer, Hillary will invoke the 25th, get rid of him, and install her own crackpot as VP. No, it won’t be Obama or Michelle.

That’s my scenario, and I’m sticking to it.

So, the worst possible scenario for America. Got it.

The only way Lizzie will get the Dem nomination for VP will be if she decides that she is at least part black. The Dems want a “woman of color” for their nominee, and Lizzie’s Pocahontas gambit has failed.
https://www.foxnews.com/media/sunny-hostin-black-women-vp-pick

She did poorly in her own state in the primaries, what possible reason would Dementia Joe have to pick her? That he and his handlers who are really running things for him would forget how poorly she did in the primaries, despite the propaganda media’s efforts to push her forward? The media wanted her, or just about anyone else, other than Bernie, to beat Dementia Joe.

Sounds like a real winning ticket. Two liars who can’t keep their lies straight, with dementia on the top of the ticket to appeal to the insane and senile?

Both those faces belong on criminal wanted posters.

Is she able to understand what he is saying? That should be the first requirement of being his VP.

Now break a beer bottle over your head.

Those who are endorsing Biden don’t care about him they are looking to be VP. An automatic move to President in a few months after election. Their only way to become President

And shame on Haaaaa-vaaaaahd for not apologizing for its not-quite affirmative action hire!