In blocking a simple, clean $250 billion funding increase for PPP, Senate Democrats propose a $500 billion bill that addresses many other issues, including promoting minority community lending. 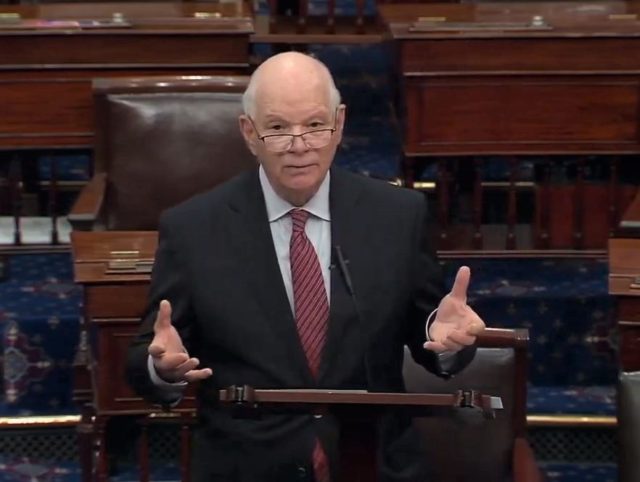 The PPP provides forgivable loans to small businesses on the condition that the funds be used for paying workers, with a portion permitted to be paid for certain fixed costs like rent.

The goal is to keep people employed until the economy can restart, and hopefully to keep small businesses afloat. Yet Democrats once again are holding such relief hostage to additional demands for funding and social goals.

All Republicans in the Senate sought to do was increase PPP funding from $350 billion to $600 billion. But to do that, the Senate needed to vote by unanimous consent to consider the bill.

I hope none of my colleagues object to my request for these urgently-needed funds. There is no reason why this bipartisan job-saving program should be held hostage for other priorities. Let's re-fund the only program that's already running dry and keep moving forward together.

McConnell on interim bill to approve $251 billion for small business: We need more funding and we need it fast…I am literally talking about changing the number from $350 to $600..that by definition is a clean bill

McConnell: The Democratic leadership has suggested they may hold Americans’ paychecks hostage unless we pass another sweeping bill that spends half a trillion dollars doubling down on a number of parts of the CARES Act, including parts that have not even started to work yet.

McConnell: I’m not talking about changing any policy language that both sides negotiated together. I am literally talking about deleting the number 350 and writing 600 in its place. A completely clean bill.

Democrats refused. Maryland Democrat Ben Cardin, and  rose to object when Mitch McConnell requested unanimous consent. Cardin’s argument was that there are additional things that need to be done, so we’re not going to expand funding for PPP unless we simultaneously address those other issues.

McConnell: "The Democratic leadership has suggested they may hold Americans paychecks hostage unless we pass another sweeping bill."

In place of a simple, clean funding increase for PPP, Senate Democrats will propose a $5 billion bill that addresses many other issues, including promoting minority community lending.

The Senate is now adjourned until April 13.

You can watch this mornings proceedings here:

Just wondering were they got that fact…..

Just wait until Pelosi gets ahold of this.

Tell the Democrats to go get fucked.

If the don’t want to pass the bill then fuck them. Dont pass ANYTHING and sing long and loud everywhere they can that this is what the Democrats wanted.

I think it’s about time that minority lending stands on its own. I for one am sick and tired of paying for it.

What a relief to know that when Americans are losing jobs by the millions and don’t know how they’re going to pay rent or buy food, the Ds are right on it, looking out for THEIR own interest rather than the suffering of the American people.

Party of “the little guy” my arse. I’d like to see the D party shattered into a million pieces and thrown to the wind.

We all knew this was going to happen.

And surprisingly, Trump missed a beat when he said this program needed more cash. He failed to mirror the dems’ usual B.S. statement that they want a “CLEAN” bill, which the bills they want are NEVER clean.

Always full of flotsam & jetsam, but the media carries it for them. Makes for such a soporific sound bite: “Give us a clean bill.”

You threaten to confiscate all the Trust Funds in the nation, to ‘pay for the Kung Flu’, you’ll see all these Dem games end super fast.

Don’t pass anything until we see how phase 3 works out.

The Dems are still rooting for the apocalypse — a new Great Depression they can use to Hooverize the President.

I’m so disgusted with the National Socialist party, they are beyond vile. They do not work for the American people, they are enemies of the State.

I hope and pray that the majority of them find themselves out of power soon. Our country cannot take their “leadership” any longer.

wasn’t that long ago that Rep. Massie was vilified by fellow politicos and the media for demanding a quorum be present ( not being in DC during this crisis is a topic for another day), will those same people vilify Cardin for holding up the money?
I have my doubts.

Guys this is why, the previous post on the issue, I argued for saying yes to these d demand with certain conditions. The d are allowing themselves to be boxed in as the party refusing to help small businesses.

Now I would hope everyone understands that the MSM is going to do their best to flip the narrative and paint the r and PDJT as the ones responsible. So that being the case, it makes sense to have a counter proposal which agrees to d funding requests in terms of amount but with stipulations that provide for a more conservative orientation in terms of how that funding is applied.

Politics is the art of the possible, unless you have a rock solid majority, we don’t. Think about Judo, use your opponents aggression to allow your opponent to place themselves off balance and then counter attack. Politics is very much the same.

Whether additional funds will be spent is, most likely, a foregone conclusion. We should be pushing to make sure the funds are utilized to assist hospitals in restocking, local governments to cover the costs of covid and for small business to prepare for reopening; paying rent, utilities and rounding up the portion of their workforce they idled.

The sooner back to work, the sooner idled workers are not drawing enhanced unemployment benefits and the sooner we begin the economic recovery necessary to pay the bill for all the covid spending.

Cut off their payrolls so they can march in solidarity.

Why do we so often hear about the value of a line item veto, when we could get the same effect writing single-item laws?

Myself, I don’t understand thousand-page bills. Most congresscritters don’t have the attention span to read a one-pager. And their mental acuity lasts about a paragraph.

Gropy Joe isn’t unusual; he’s just out front where it can’t be hidden these days.