China’s propaganda campaign to deflect blame away from them for the Wuhan coronavirus pandemic continues as many diplomats and embassies opened Twitter accounts.

Get ready to use that “fake news” flag on Twitter!

The state of play: Many of them are now using the social media platform to post accusations, boasts and name-calling directed at governments and individuals they feel have insulted China.

What they’re saying: “What’s behind China’s perceived ‘Wolf Warrior’ style diplomacy is the changing strengths of China and the West,” an April 16 article in the Chinese tabloid Global Times stated. “The days when China can be put in a submissive position are long gone. China’s rising status in the world, requires it to safeguard its national interests in an unequivocal way.” 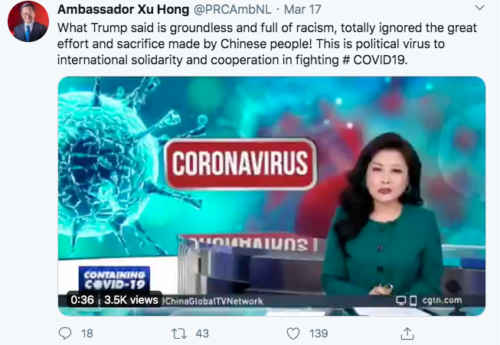 “The Chinese Embassy in Caracas criticized unnamed Venezuelan officials for referring to the coronavirus as the ‘Chinese’ or ‘Wuhan’ virus and ended the angry Twitter thread by telling the officials to ‘put on a face mask and shut up.'”

That’s why DUFFUS sold Twitter out to the CHICOMS

notamemberofanyorganizedpolicital in reply to 2smartforlibs. | April 24, 2020 at 1:30 pm

China has long been the native home of Tweet Farms.

They backed Hillary Clinton with them in 2016.

The greatest weapon the Communist Chinese had against this nation was the army of news, hollywood and elected officials they’ve bribed into treason.

The coup de gras is this virus. They and their treasonous Americans can ensure it never stops ‘spreading’.

The only way out is to act like we have during any normal flu outbreak. And then ferret-out the American traitors on China’s payroll.

notamemberofanyorganizedpolicital in reply to TheFineReport.com. | April 24, 2020 at 1:31 pm

TheFineReport.com in reply to notamemberofanyorganizedpolicital. | April 24, 2020 at 2:03 pm

NO! ‘Pluck’ the traitors!

They’ll always be enemies from the outside. But from within??

This falls squarely on Barr’s head. How Christopher Wray still heads the FBI is one of the great clowns-shows in American history. And it is on Barr’s head.

Well then, if China wants to go this direction then the people of the rest of the world should gang up and call out these fake propaganda accounts for what they are and mercilessly fill their timelines and whatnot up with the truth and drown out their lies.