The clip shows King talking by phone to a woman alleged to be Reade’s mom, who said her daughter “could not get through with her problems at all” and had “just left” Washington, D.C. after working for a “prominent Senator.” 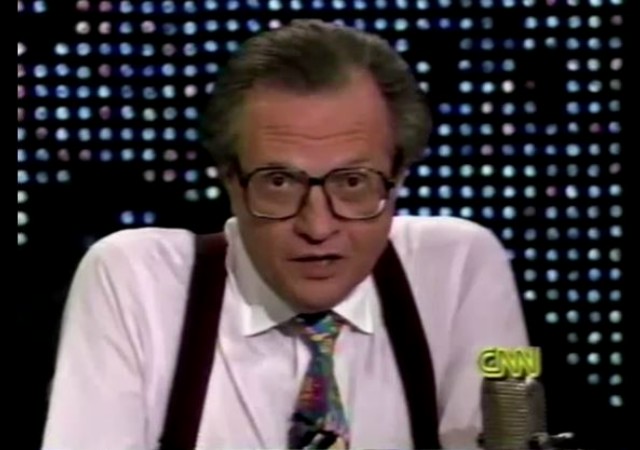 Unlike old guard media outlets who have made it more than clear their only interest in Tara Reade’s sexual assault claim against Joe Biden is to make it go away, alternative news sources continue to pursue the story instead of allowing it to fade into the woodwork.

The Intercept’s Ryan Grim reported on Friday that Reade, a former Senate staffer for Biden, told the Intercept in prior interviews about a call her late mother allegedly made at some point in the 1990s to the Larry King Live show on CNN. According to Reade, her mother – without naming any names – mentioned to King the story of her alleged assault and asked King for advice on where Reade could go get help.

Grim noted that Reade wasn’t sure about the date or year of the alleged call, but felt “mortified” that her mother had anonymously spoken about it on national TV.

After Grim talked about the alleged call with podcaster Katie Halper, who first reported Reade’s allegation a month ago, a listener sent the Intercept a copy of a 1993 Larry King Live segment that featured King speaking to a woman on the phone about her daughter who she said “just left” Washington, D.C. after working for a time for a “prominent Senator.” Here’s the transcript of the August 11, 1993 call:

CALLER: Yes, hello. I’m wondering what a staffer would do besides go to the press in Washington? My daughter has just left there, after working for a prominent senator, and could not get through with her problems at all, and the only thing she could have done was go to the press, and she chose not to do it out of respect for him.

KING: In other words, she had a story to tell but, out of respect for the person she worked for, she didn’t tell it?

The date of the call and the mention of the caller being from San Luis Obispo were noteworthy for the following reasons, according to Grim:

Per Grim, he shared the transcript of the exchange between King and the caller with Reade, who he said “said that it gelled with her memory” of the call.

It didn’t take long for video of the call to surface. Watch and listen to the one minute clip below:

#BREAKING: HERE is the video from August 11,1993's 'Larry King Live' described by @TheIntercept (and Tara Reade) as allegedly featuring her mother calling in and alluding to Reade's sexual assault claims against @JoeBiden (blog here by @ScottJW) https://t.co/fCgEqBnX7n pic.twitter.com/V5FGHskv56

In a tweet she posted and a statement she made to the Daily Caller, Reade stated that the caller was her mother:

“I just heard audio, my mother died and hearing her voice made me cry. She was such a good mom and always watching out for me even now,” she said, adding that the video proves what she has been saying: “that I was forced out and wanted to come forward in 1993.”

In his report, Grim made a key observation about how the call, if it was indeed Reade’s mother, lent credence to the possibility that something happened between Reade and Biden, something that was serious enough that a sitting United States Senator would not want it to get back to the press:

There are several notable things about the emergence of the call. On the one hand, the caller does not specifically mention “sexual harassment” or retaliation, as Reade had recalled. On the other hand, the reference to being unable to “get through with her problems” aligns with Reade’s claim that she complained to superiors in Biden’s office and got nowhere, and the reference to going to the press makes clear that the caller is talking about more than just generic problems at the office. The problems, she makes clear, would damage the senator if exposed.

Reade also said she reported her concerns about harassment to three people in the office: Biden’s longtime aide, Dennis Toner; his then-chief of staff, Ted Kaufman; and his executive assistant, Marianne Baker. Reade recalls having multiple conversations and meetings with them about the alleged harassment.

Both Toner and Kaufman told NPR they had no recollection of Reade. Congressional files confirm she worked in the office for about nine months from December 1992 to August 1993.

“She did not come to me,” Kaufman said. “I would have remembered if she had.”

The Biden campaign released a statement from Baker denying she’d ever received a complaint from Reade about Biden. Baker stated she had “no knowledge or memory of Ms. Reade’s accounting of events, which would have left a searing impression on me as a woman professional, and as a manager.” Baker went on to say the sexual assault allegation against Biden was “clearly false” and was a “complete contradiction to both the inner workings of our Senate office and to the man I know and worked so closely with for almost two decades.”

Unfortunately, if Reade did indeed file a harassment complaint at the time, it’s not going to see sunlight before the election, according to independent journalist Rich McHugh, who has also been investigating this story:

And @UDelaware — which houses the collection of Joe Biden’s senatorial papers — just confirmed to me that the papers “will remain closed to the public until two years after Mr. Biden retires from public life.”

So while we have no smoking guns here, we do have some intriguing new information that suggests at least one part of Reade’s story may have been partially corroborated by the King clip.

While it doesn’t prove Reade’s sexual assault claim against Biden, what this does prove is that this story, and the #MeToo implications from it, will not be going away for Joe Biden and the Democratic party any time soon, no matter how much the national media tries to suppress it on their behalf.

It already had way more credence than any of the BS allegations against Kavanaugh.

This didn’t become a “thing” without a reason behind it. It is meant to derail Biden’s candidacy, and replace him. We already know that there’s at two camps concerning Biden.

One is he becomes the nominee and his (i.e. selected for him) Vice Presidential nominee is the backup candidate/immediate heir apparent. The other is not to go through all that convoluted, behind-the-scenes maneuvering, and just be over with Biden before the “convention”.

Old Joe had a pretty active penis back in the day, and took advantage of his office both for sexual gratification and personal financial gain for himself and his family (brother and sons).

Is that really hard to believe?

Joe’s scum. Phony “doctor” Jill probably has known this for a long time, but kept quiet because riding the gravy train was too much fun. She wants to continue to cash in and is willing to keep doofus, lost-his-marbles Joe out there so she can become First Gold-Digger.

It’s no smoking gun, but it adds to the discussion and could hurt him politically-if it’s possible to hurt a Democrat over sex allegations.

I don’t think he’s going to be the nominee anyway.

anecdotal, but a millennial child of a friend has said that he will not vote for Joe because of the hypocrisy of the Dems running a verified Me-Too candidate.

A solution to the Democrats’ Biden problem. But which faction will prevail? Either way, it’s the leaders, not the voters, that decide. Democratic principles gone awry, but that won’t stop them from lecturing about corrupt governance.

If the Democrats do replace him before the convention, and that candidate is not among those who ran for President this cycle, they might as well put scare quotes (“”) around their party’s name.

Perhaps the Dems plan to replace Joe right before the election. Joe’s role is to prevent any vetting of the actual Dem candidate due to lack of time.Any Dem candidate is going to have a bad history so Joe just continues to take punches until the end of October. He stays…for now.

Larry King is an obnoxious liberal, but he is far more honest than anyone at CNN today.

It didn’t take long for them to start censoring it, either.

And speaking of censorship, I read elsewhere that the company that manufactures the UV equipment that was mentioned in connection with Wuhan virus treatment has had their social media accounts pulled.

Oops, CNN has misplaced that episode. It no longer exists in their library.

Isn’t that convenient? There are probably a couple of hundred copies floating out there on the Net.