NY Times deleted Biden’s “hugs, kisses and touching” from story because Biden “campaign thought that the phrasing was awkward”

NY Times deleted Biden’s “hugs, kisses and touching” from story because Biden “campaign thought that the phrasing was awkward” 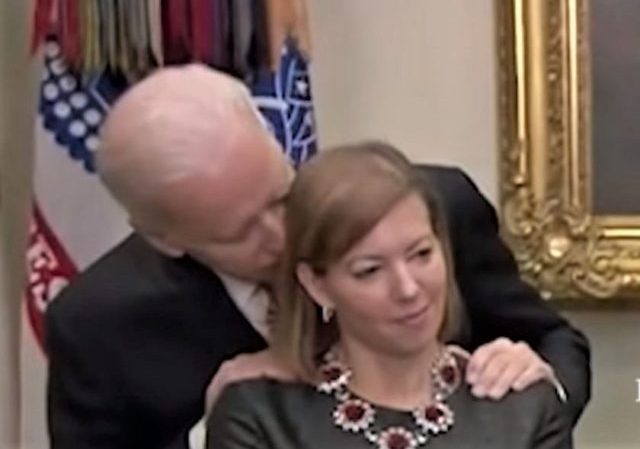 The New York Times is in “drag Joe Biden across the finish line” mode. There is no better example of that than its coverage of Tara Reade’s sexual assault allegations against her former boss, who was a Senator at the time of the alleged assault.

The paper tried to downplay Reade’s claims by including a line about how “filing a false police report may be punishable by a fine or imprisonment.” The outlet then changed a pivotal paragraph to take out language about past allegations of sexual misconduct against Biden by numerous other women.

To recap, here was the original paragraph:

No other allegation about sexual assault surfaced in the course of reporting, nor did any former Biden staff members corroborate any details of Ms. Reade’s allegation. The Times found no pattern of sexual misconduct by Mr. Biden.

A tweet with the same language was also deleted. In another tweet explaining the deletion, the paper blamed “imprecise language”:

We’ve deleted a tweet in this thread that had some imprecise language that has been changed in the story.

Smith: I want to ask about some edits that were made after publication, the deletion of the second half of the sentence: “The Times found no pattern of sexual misconduct by Mr. Biden, beyond the hugs, kisses and touching that women previously said made them uncomfortable.” Why did you do that?

Baquet: Even though a lot of us, including me, had looked at it before the story went into the paper, I think that the campaign thought that the phrasing was awkward and made it look like there were other instances in which he had been accused of sexual misconduct. And that’s not what the sentence was intended to say.

It’s not very often you find a significant media outlet openly admitting to changing a story after complaints from the accused’s presidential campaign, but there you have it.

Smith: I’ve been looking at The Times’s coverage of Justice Brett M. Kavanaugh. I want to focus particularly on the Julie Swetnick allegations. She was the one who was represented by Michael Avenatti and who suggested that Kavanaugh had been involved in frat house rapes, and then appeared to walk back elements of her allegations. The Times wrote that story the same day she made the allegation, noting that “none of Ms. Swetnick’s claims could be independently corroborated.”

Why was Kavanaugh treated differently?

Baquet: Kavanaugh was already in a public forum in a large way. Kavanaugh’s status as a Supreme Court justice was in question because of a very serious allegation. And when I say in a public way, I don’t mean in the public way of Tara Reade’s. If you ask the average person in America, they didn’t know about the Tara Reade case. So I thought in that case, if The New York Times was going to introduce this to readers, we needed to introduce it with some reporting and perspective. Kavanaugh was in a very different situation. It was a live, ongoing story that had become the biggest political story in the country. It was just a different news judgment moment.

“Kavanaugh was already in a public forum in a large way,” but Joe Biden, who is the presumptive Democratic nominee for president of the United States, is not? Baquet’s claim there literally does not make any sense.

This is further evidenced by a question from Smith earlier in the interview where he asked Baquet why the paper did not give Reade’s story the breaking news treatment:

Smith: Tara Reade made her allegation on a podcast on March 25. Why not cover it then as breaking news?

Baquet: But mainly I thought that what The New York Times could offer and should try to offer was the reporting to help people understand what to make of a fairly serious allegation against a guy who had been a vice president of the United States and was knocking on the door of being his party’s nominee.

Nonsense. It’s a standard operating procedure for media outlets to run with a quick breaking news story that gives what the known facts are at the time. More detailed follow-up stories then go up soon after once they conduct interviews, do research, analyses, etc. Baquet knows this because it’s standard for the Times to do the same thing. But apparently not when it involves serious allegations against a guy they’re trying to help win an election.

Brett Kavanaugh had to be stopped, so it was full-court press on throwing everything but the kitchen sink at him, no matter that the allegations against him were unsubstantiated.

On the other hand, Biden is the best chance the Times’ has to defeat Trump, so they’re willing to toss what little bit of journalistic credibility they had left out the window to protect him, including editing a damaging story after his campaign lodged complaints.

Quite frankly, the Q&A between Smith and Baquet did the paper more harm than good and only confirmed that the Times’ willfully and deliberately frames their coverage of public figures based on the left-wing political biases of their newsroom and editorial board.

While this is not new news for anyone familiar with the paper’s history of giving Democrats deferential treatment, it’s still infuriating all the same.

I gave up on the Times years ago and the only people I know who still read it are diehard Trump haters. The haters find joy (and they would add truth) in the NYT Fake News. It’s hard to understand such people but then again, some of those haters are in my own extended family who say they don’t understand me!! #Deplorable

1) Barry the organ grinder monkey got his marching orders and dutifully endorsed the addled perv.
2) The ny times is irrelvant, except as the go-to for marching orders for fascist useful idiots.

You know what would be great? If this blog allowed graphics to be posted along with the comments.

They prepared a dozen videos of Obama pre-endorsing every single rat in the race.

That’s because either his wife, Michelle, or his former secretary of state, Clinton, is going to get the wink, nod, and handshake that will all but assure they’ll be President shortly after inauguration, IF President Trump is not re-elected. There is a part of me that is TERRIFIED that the foreign, globalist, One Worlder’s will NOT get blindsided again…

said it yesterday,, how many other stories are the editing after the fact right now? They may have a boiler room operation going right now for future generations and we’ll never know.

Imagine if the Trump campaign tried to get the NY Times to change a headline. The entire media would be complaining about Trump bullying the media.

Well, yeah, it’s “bullying” when you try to get them to do something they don’t want to do.

Nice, they let the Biden Campaign vet their content? I’m sure they’ll let the Trump Re-Election campaign do the same. LOL.

Campaign contributions should be declared, right?

The photo of the extremely uncomfortable woman included with the article writes its own political ad. “Would you want this man within six feet of any female you care about?”

Hell, they probably can’t do stenography or even a decent shorthand anymore! & why bother with DNC & CCP writing everything for them…

I totally agree with jb4. That photo of Biden standing behind that lovely lady, just makes
me cringe every time I see that picture. You can just sense, she couldn’t wait for him to
walk away. Her body language says everyting…get away from me you “creep”. What makes him think that any of this is correct behavior, anywhere with anyone. Basically, Biden ruinned that very special moment for her, her husband and their family. Perverts are always all about themselves. God forbid he gets elected, but what happens then if he is allowed to continue this type of behavior on a presedential scale?

Pravda on the Hudson strikes again!

Not fair, Pravda was much more unbiased.

I’m a former journalist who ended my career at the Los Angeles Times before Baquet infested that paper. I’m gobsmacked that Baquet thought this explanation would make the NY Times look good to any but the most partisan of it’s readers. (Come to think of it, that’s probably 99.9% of its readership.) However, it’s of a piece with other Baquet comments, public and private. Remembered his leaked remarks about pivoting from Russian collusion to racism in every story (almost exclusively about Trump and Republicans). The NY Times also has a history of pleasing Democratic campaigns. As I recall, its reporters allowed Hillary’s campaign to vet stories before publication. This isn’t journalism; rather, it’s blind advocacy that daily erodes what little credibility with the public that daily newspapers have. Journalism is dying a very public self-inflicted death.

Its readers. I know the difference!

Unfortunately, I think that it is more than “journalism dying a very public self-inflicted death.” The Fourth Estate helps Democracy to function properly and the consequences of its failures to report objectively and without bias, or even to report at all, damage more than just itself.

That the MSM is fine with Pelosi shutting the House down until May in the midst of a national emergency is appalling. If the media had done its job of holding all candidates up to the light of day, would we really be facing a mentally declining old man as the alternative? Trump was a Democrat operating in Democratic NY City for much of his life. Where was the press in reporting that with Trump’s election the Dems probably got the one Republican they could have gotten the most done with?

I dont think that is actually the case jb.

I think we got a guy who loved his country irrespective of his political past. He was probably the worst guy for Democrats to get.

“If you ask the average person in America, they didn’t know about the Tara Reade case.”

I kind of thought the entire purpose of news outlets was to inform the average person about things they don’t know.

“But I’m not sure that doing this sort of straightforward news story would have helped the reader understand. Have all the information he or she needs to think about what to make of this thing.”

Oh…NOW I get it. Your job as a news publication is not just to inform the average person, but to tell them what to think about the information as well.

I kind of thought the entire purpose of news outlets was to inform the average person about things they don’t know.

In an ideal world, yes. But in the actual history of journalism it’s almost never been the case. They’ve always been advocates of one platform or another, selecting and presenting the “news” in ways that reflect their agenda.

Mika was simply blurting out the truth when she said telling us what to think is the media’s job. And indeed, that is what they’re paid to do — like any propagandist.